If I can say anything about the imposed quarantine it’s that I have much more time in my day, and nights, to focus on the things I love. In between the all important activity of staring up at my stucco ceiling and lazily stirring my third pot of boiling noodles, I’ve found myself picking through my shelves of comics and graphic novels. Rarely do I re-read titles already on my shelf after the initial read, but digging through them once again has been an exciting distraction from the ever impending social isolation that may or may not be related to the quarantine (It is…. I promise…. Please believe me). The first title to come off my shelf, and the one I bring to you, is the recently released Harleen by Stjepan Sejic. After flipping through its pages again I found the hours had been chipped away and I couldn’t help but bring it as my first suggestion for our Quarantine Re-Read.

Harleen was published through DC’s Black Label publications back in September of 2019. With both the writing and art being done by Stjepan Sejic, it brings the classic character of Harley Quinn into the spotlight once again by retelling the slippery slope of her backstory. Since the story was published through Black Label, Harleen includes the same dark content viewed through a much more mature filter. Including unfiltered profanity, mature sexual content, and uncensored violence, this reiteration of Harley Quinn’s backstory is less about the character dominating DC’s “bad girl” scene and more about the victimized woman that once was Harleen Quinzell.

If you’re not already familiar with the story of the sassy anti-hero with the annoying Brooklyn accent this is an excellent introduction. From the bright, but downtrodden, doctoral graduate into the lovelorn and obsessed sidekick of Batman’s nemesis, Harleen Quinzell takes wrong turn after wrong turn on a path she herself admits as evil. The overarching theme in each of the three comics (presented as books in the graphic novel) can be boiled down into two ideas, “The road to hell being paved with good intentions” and “The abyss stares back”. The first is evident from the series’ narrator, Harleen herself, in how she retells the event, highlighting every wrong turn made for the best intention. Each choice gets muddier and muddier. These particular decisions reflect well on the character herself as a beacon of good intention. The second main idea, expressed explicitly by the Dark Knight, is shown brilliantly in the series’ depiction of the clown prince of crime himself.

It seems unfair to link the Joker as a pivotal part of Harley Quinn’s character. Especially in light of the recent Birds of Prey film which focuses on the explicit intent of Harley to distance herself from the Joker. Despite this, however, the Joker’s influence is what makes Harleen Quinzell, Harley Quinn. Stjepan takes the typical maniac, murderer, and psychopathic perspectives, and waters them down to an uncomfortably convincing subtlety. Paying homage to many different iterations of the character, Harleen’s Joker seems to stand out as having a genuinely well designed attraction. With each step down the fractured rabbit hole that Harleen takes, the reader takes one right alongside her, skeptically approaching the attractive volatility of the man with the smile. Throughout each scene and each page we’re shown a little humanity of the character, one we desperately want to believe is true. Of course, we all know how the story ends, we know what hides behind that smile.

In addition to the depth of character we see portrayed in her budding romance with Joker, we also see the beginnings of Harley’s classic character relationships. Many of the rouges gallery make appearances, some brief and some with major story rolls, most notable are Two-Face, Killer Croc, Hugo Strange, and Poison Ivy. The friendship and support Harley receives from Poison Ivy in particular, is shown in its infancy through a handful of heartfelt scenes. While advertised as tertiary to the events of Harleen this relationship is one that is begging to be expanded on in later Black Label titles. Beside Poison Ivy, Harley Quinn’s relationship with Killer Croc has seeds planted in animosity and annoyance, leading to a particularly violent encounter later in the series. In addition to these major players, little cameos can be seen from characters including Bane, Penguin, Zsasz, and Victor Freeze. The traditional heroes, however, take a back seat serving only as supportive characters such as Batman and Commissioner Gordon, and brief cameos or offhand mentions such as Robin, Batgirl, and Alfred.

From the first page to the very end, the reader is wrapped up in the city of Gotham, viewed from at first, the hopeful perspective of an everyday citizen. Then watched as the cynicism and mania of its worst villain twists that perspective, creating a dark and wickedly enjoyable story. The amazing visual art and compelling writing brings Harleen to the forefront as one of my favorite DC stories within the last year. Told from the growing Black Label publication, this dedicated Harley Quinn story is one that any true fan shouldn’t pass up. During this quarantine I highly recommend picking up all three books or the collected graphic novel, taking a hit of the laughing gas with me, and starting the story of Harleen Quinzell. Oh, and don’t forget to smile!

Alright, now is the time I want to touch on a few of my favorite parts of the story. Spoilers will be ahead, so if you haven’t had a chance to read Harleen, Batman:Damned, and Batman: White Knight, you may want to check them out before reading further. All of these DC Black Label series feature Harley Quinn iterations in a few issues for some, and as a major character and plot point for others. I wanted to commend the various perspectives found in each one of these series. The heartbroken spinout found in Batman:Damned really highlights the anguish, attachment and dependency issues, and rage Harley has within her. While not particularly pivotal to the story itself, it is a refreshing look that is in direct opposition to the tilted glee frequently seen with the character. Batman:White Knight and Harleen have very similar depictions of the character, but further apart in their stories. White Knight shows the dichotomous nature of her character perfectly by bringing both depictions out as unique characters. One we see more often on the screen, shown as childish and prone to tantrums of rage. The other is seen as lovelorn, intelligent, and capable. The latter has much more in common with the Harleen Quinzell seen here in Harleen, just perhaps a little more dour. Each iteration adds something unique to the character and all are worth experiencing.

As for the specifics of Harleen there were two scenes I found to be strikingly effective. The first scene takes place in Harleen #1. Not yet having met the Joker, Harleen Quinzell is walking in Gotham when she is caught up in the most recent of Joker’s schemes. She comes face to face with the Joker for the first time. While this scene itself is enjoyable for its future implications, it is the ensuing battle between Batman and Joker that truly captured my attention. Caught up in a tactical smoke grenade Harleen is consumed by panic and fear watching the battle unfold. This scene shows a typical Bats showdown from the outside all while maintaining a noteworthy sense of tension. It is as enjoyable to watch unfold as if we were viewing the drama from the caped crusader’s perspective. The fantastic scene setup was worth spending time admiring even through my subsequent readings.

The second scene that I found particularly gripping was the climax of Harleen #3. Two-Face has broken into Arkham Asylum, the romantic tryst between Harleen and Joker has been sealed (with blood among other things), and Harleen is rushing to find Joker in the chaos of a breakout. After finally catching up with him, Harleen saves him from a revenge seeking guard who has been her only friend during her tenure at the Asylum. She does this by point blank shooting him in the head. Harleen as a narrator claims this to be an accident, but the trauma was inflicted and the line was crossed. While what stood out to me was the visual representation of her psyche shattering with the pull of the trigger, the aftermath has an eerie finality that ties the entire series together exceedingly well. Finally relinquishing her control of her own mind, she immediately latches onto the Joker’s near kind words. With that final fracture, the rest of the story is history.

While memorable for most every aspect of it, the gripping cover art for each issue is worth mentioning as well. Each cover showed a sense of emotion mixed with just enough madness to give me hope for the story I have wanted for her for the longest time. I knew from the moment I opened the hardcover graphic novel to the moment I closed it, that that hope was well founded. Stjepan Sejic delivered the story that Harley Quinn deserved and has deserved for a long time. 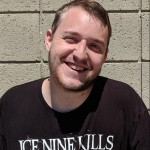 Julian Douglas has been reading comics and playing video games since he was eight years old. He took film classes during his pursuit of a Software Engineering degree and has enjoyed mixing in his passion for writing. He enjoys macabre and cosmic horror most of all, but enjoys writing about all things geeky.