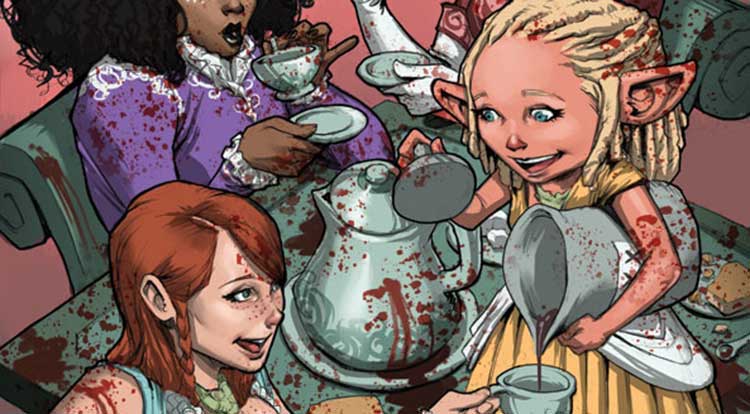 Rat Queens #5 marks the end of the opening arc on this amazing new title from Image, and to no surprise whatsoever, the first adventure of the Queens ends in a blaze of bloody glory. Rat Queens began under the simple guise of a Dungeous and Dragons-esque adventure series starring four miscreant females, but the expansive world that writer Kurtis Wiebe and artist Roc Upchurch have been able to craft over the course of these five issues is remarkable. Rat Queens #5 aims to expand that universe even further, and although the next arc is not going to begin again until May, the content of this issue is more than enough to satiate the eager reader. You’re getting a lot of swearing, drinking, and drug use with this issue, and that’s just from the four main characters.

Wiebe continues to showcase the supporting cast with this issue, and all of them, like the Queens themselves, fit perfectly in this established world. There’s so much random humor in Rat Queens #5, mostly from the Four Daves, a troop of warriors briefly introduced in the first issue who provide support for the Queens in their battle with some disgruntled trolls here. We get a glimpse of what the Daves are capable of on the battlefield, including one Dave that is able to conjure a floating naked lady to distract the opposition and Orc Dave, whose use of healing spells causes bluebirds to suddenly appear in his massive beard. On its own, it reads quite ridiculously, but in conjunction with the rest of these characters and their own idiosyncrasies, characters like these are continuing to fill out this universe. Rat Queens #5 also teases a few character connections as well, with Dee Dee’s religious doubts linking her with the Queens foe, Gerrig, who in turn has a direct tie to Sawyer Silver, a character just chalk full of secrets waiting to be unearthed. It’s obvious this universe is only going to get more robust and I can’t wait.

Normally a high point in each issue, Roc Upchurch’s art is noticeably weaker this time around, but keep in mind that’s merely a step down from the excellence he was delivering prior. Many of the faces lack detail and there’s a general rushed look to a lot of the panels, likely the result of an overworked artist. There’s a letter in the back of the issue from Wiebe explaining that the book will be taking an abnormal six-week release schedule when it returns so that Upchurch can continue to provide his art for the title since he, unlike most artists at companies like DC or Marvel, does the art, inks, and colors for each issue of Rat Queens. That being said, the battle sequence between the Queens and the trolls is a glorious barrage of grotesque imagery, and as the last troll falls, Upchurch makes sure that it is the triumphant moment that it deserves to be.

Rat Queens is not a series to be missed even at its irregular release schedule. This issue ends the first arc, so those that have not been reading are strongly encouraged, if not mildly threatened, to purchase the first trade when it comes out next month. This series is Dungeons and Dragons as if the foulest, most politically incorrect group of friends was playing and loving every blood-soaked minute of it.