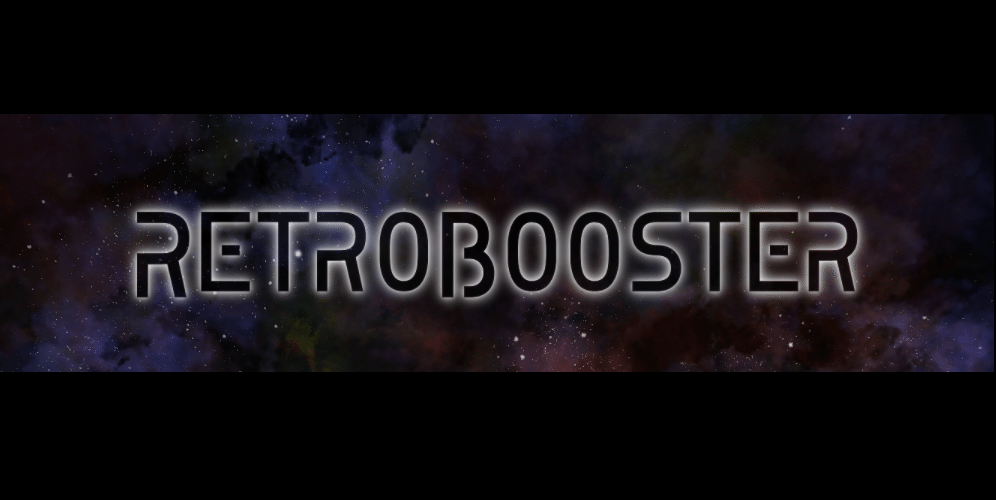 Retrobooster is a cave flyer with exceptionally difficult controls, mixed with a dash of bullet hell. If you aren’t familiar, a cave flyer is where you control a ship by rotating it around and using a thruster to boost about through very narrow levels. It’s not a very common genre, so there’s no convenient wiki page to link to that describes it in more detail, but there are some other examples out there. Thrust was the original, but if you want a slightly more recent take on the genre Sub-Terrania is a good one to look into.

One of the most interesting things about this game is how well the environment reacts to your ship. There are humans scattered about that you can rescue for bonus health and items. You can crush the humans you are trying to rescue by landing too hard or coming in too fast from the side. You can push them around with your ship or by blowing up enemies near them. You can even light them on fire with the thrusters of your ship. It’s all good fun to watch and play around with, but it makes actually rescuing the poor guys rather difficult. It’s entirely optional, so it’s not a big issue that they are hard to rescue, and watching them react to the ship is really entertaining.

As for actually playing through the game, the best way to describe it is that it is incredibly difficult. Hitting a wall going too fast hurts your ship. You have a shield that you can turn on to prevent damage or ram enemy ships, but both the shield and your ship’s hull are in short supply. When you can get going quickly it is very satisfying, but those moments come few and far between. Most of the game is an exercise in trying to hit a moving target while the recoil from your attacks and the constant tug of gravity move your ship about. As you play through the game solving puzzles and fighting off hordes of alien assailants, no threat will ever loom larger than the simple act of navigation. This isn’t any criticism of the control scheme, it’s more in line with Super Meat Boy in that the developer expects you to get very good at understanding how to steer the ship.

The puzzles in the game are, thankfully, relatively simple. Most of the time it’s more of a maze than a puzzle, and you simply have to explore the level looking for switches to press or enemies to kill to open the door to the next area. Since the areas are also filled with extremely dangerous enemies and even more dangerous walls, it’s actually a good thing that they aren’t more complicated. More often than not, it simply provides a more engaging way of navigating through the terrain than “go right, because I said so.” The problem lies in the other times when the puzzles aren’t quite so friendly. There were a few cases where hitting a button would open a pathway for a limited time, which presents an interesting conundrum. Go slow and you won’t make it in time, go fast and you’ll probably die by smashing into a wall. With practice I was able to pass most of these, but there were some that made me thankful for the game’s co-operative multiplayer mode.

The multiplayer aspect is the real highlight of the game. All of the multiplayer is split-screen only, with up to four players at a time using gamepads in addition to the standard keyboard setup. I played solo for a few hours trying to get a feel for the game before a friend came over to help me try out the multiplayer modes. I was marginally engaged, partly because I’m not that great at the control system and the early parts of the game weren’t terribly engaging, and partly because of a bug I will describe a bit later. The multiplayer reeled me into the game though, making me want to go back and play the solo campaign even more. Co-op mode is really simple, you just have an extra ship for navigating the puzzles and fighting off the alien hordes. I didn’t notice any scaling of the number of enemies, but then we only played through two levels that way. The game also has a deathmatch mode which, while not without its share of issues, was plain old-fashioned mindless fun.

Deathmatch pits you against your other opponents in a free-for-all destruction derby, pretty standard fare. The added difficulty of navigation made things much more interesting though, as more often than not I wouldn’t actually get the point for killing my competitor because I was much better at knocking him off course and into the ground than actually shooting him. Hitting the other players is insanely difficult with the standard weapons. Most of the enemies in the game move much slower than the player ship is capable of in much more predictable patterns, and the ship’s arsenal is balanced around that. Special weapons are a different story entirely though, with the guided missiles all but guaranteeing a kill. After a while it devolved into a race to see who could fire the first special weapon within range of each other, and it got a bit a stale.

The other big issue with the deathmatch mode is that is uses the normal campaign maps. These maps aren’t designed for this style of play, and in the end we spent more time trying to find one another, and killing ourselves on the terrain in the process, than we did actually fighting. It’s also a bit odd that you can actually complete the levels and force it to a new map during the middle of a match, but it has some strategic value since you can stop your opponent from picking up a good weapon, in the right situation.

Controlling your ship is the heart of this game, and that can either be a wonderful experience or a frustrating nightmare, depending on your choice of input device. When I first started up the game I used the keyboard exclusively, and it was awful. The controls are very touchy and you can’t really execute the deft maneuvers necessary with such a clunky setup. The mouse might help for some, but it was too unconventional for me to get used to in such an unforgiving setting. Move the mouse left or right to turn sounds simple, but it gets confusing since right might mean down or up depending. I’m sure you could get used to it eventually, but I found it off-putting. Coupled with the fact that left and right click make you thrust forward or backward, and your left hand does the firing and shields, it was just too awkward to get used to. The gamepad is really the only way to play the game. The rotational controls aren’t so awkward when it’s your thumb and not your wrist doing the turning, and the ability to put finer control on your turning speed makes the game much easier to play. If you have one, I can’t recommend it enough.

When I first launched the game, unbeknownst to me, I triggered a bug causing the thruster to be stuck on. Apparently hitting Alt+Tab to take a screenshot of the title screen made the mouse button think it was stuck down. This makes the game impossibly hard, and it took me 20 minutes to get out of the starting room, so if that happens, just click your mouse to turn it off. It’s a particularly frustrating bug in a game like this, but it is in fact a bug, your ship is not supposed to be constantly rushing forward without your input. I don’t normally like to focus on bugs, but this one was insanely frustrating to deal with, and it can really taint your initial experience, so I wanted to call it out here.

The graphics in this game aren’t exactly anything to write home about. The particle effects for the explosions and smoke are quite well done, and the nebulous space in the background looks quite pretty, but outside of that, things get a bit monotonous. The player ship is rather plain, the enemies are mostly unadorned, polished metal ships made from basic geometric shapes, and the terrain is big flat chunks of generic rock with little variation. Later in the game the terrain and enemies to get a bit more diverse, but in general everything on a given level looks very similar. This can actually be a problem as the lack of any landmarks or defining characteristics in the terrain make it difficult to know where you are, especially when you inevitably die and don’t have the trail of enemies to follow. The levels are generally pretty short, so it’s not a serious problem, but on the more maze-like levels, it can get pretty difficult to remember which generic tunnel you are in and where you need to be going.

The soundtrack for the game was written by the incredibly talented SubatomicGlue, and it is outstanding. Nice atmospheric themes, driving techno, and bizarre tunes that you would expect to find in a 1980’s dystopian science fiction film provide a good and varied background to the game. Every level has its own unique track, so you never really get tired of the music, and the music matches the pace of the gameplay exquisitely. The sound effects are less impressive. They get the point across and have enough variety that they don’t get repetitive, but the were really overshadowed by the outstanding musical score.

Make no mistake, Retrobooster is a very difficult game. It’s very fair in its difficulty, challenging without feeling frustrating, once I got a handle on the controls and the proper setup. There were some levels that I couldn’t beat without help from a friend in one of the multiplayer modes, but I had a good time regardless. If you are a fan of the insanely-difficult sub-genre of video games, Retrobooster will make a great addition to that collection. It’s not for everyone, that’s for sure, but any gamer who self-identifies as having a core that is anything but soft will have no problem getting a good time out of this game. Check out the game’s site, http://www.reallyslick.com/retrobooster/, for more details, or to purchase the game directly for the more-than-reasonable price of $18. If you are on the fence, there is a free demo you can download there as well, so there’s really nothing to lose; head on over and check it out.

Efficacy of Exclusivity in Gaming