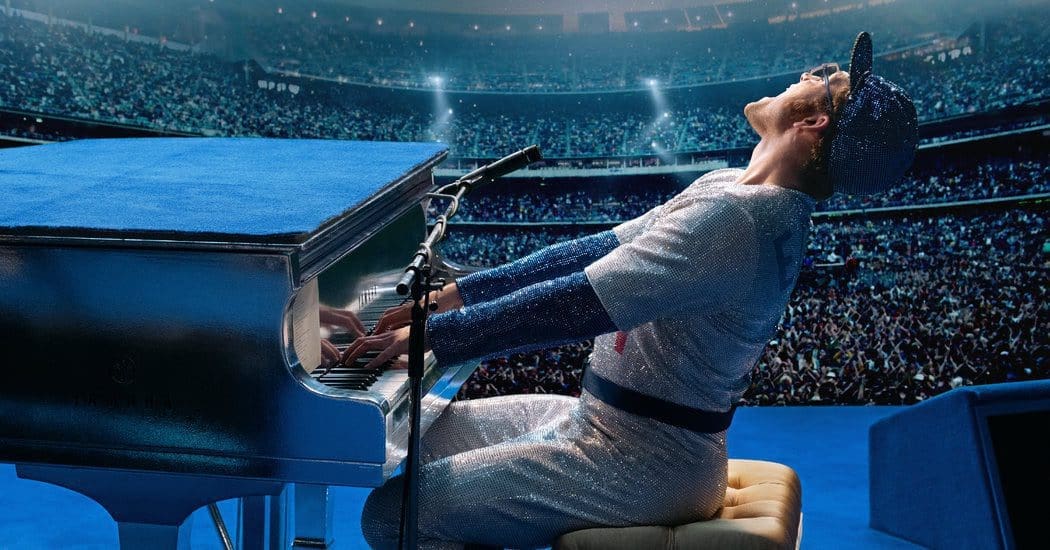 Elton John is the very definition of flamboyant. When he gets going, his spirit and talent release an unrelenting energy that can spread in all directions. John’s music is as beautiful as it is catchy; so it makes sense for a film about his life to be anything but ordinary. Much like Freddie Mercury, John has led a difficult personal life fueled by excess and filled with remorse and mistakes. Yet, for all that folly and misfortune, he has endured and thrived with the help of his friends and loved ones. His charitable contributions and humanitarian aid continue to repay the world that accepted him for who he is. So how does a movie properly capture such an enigmatic sensation in a short amount of time? By taking its audience on a surreal journey through his mind.

In Rocketman, directed by Dexter Fletcher, Reginald Dwight is a young boy living in England with parents that don’t pay him much attention. His father in particular is pretty much absent for most of his life. His mother (Bryce Dallas Howard) manages to at least make half-measured attempts at parenting, but it’s really Reginald’s grandmother who shows him genuine affection. As soon as his talent for music and piano are discovered, he begins a rigorous training program at an academy and eventually becomes a working musician. Reginald, now a young man calling himself Elton John (Taron Egerton) is introduced to Bernie Taupin (Jamie Bell), a songwriter in need of a partner who can conjure up the melodies to match his lyrics.

A remarkable friendship of common interests suddenly becomes the musical duo that will take the world by storm. On this road to stardom, Elton meets John Reid (Richard Madden), a fierce music manager who takes on Elton and handles any problems that may arise. Even his lonely heart. It would seem all the ingredients for a fairy tale story are in place; but the insecurities Elton John tries to ignore, such as the internal conflict of hiding his homosexuality and how he tries to be emotionally intimate, create a haze of uncertainty about his future.

Fortunately, all of this is framed by Elton John at a time of great reflection. What we as an audience witness is a retelling of sorts by way of Elton’s whirlwind of an imagination. It is a biography of songs laced with imagery, metaphor, and a lot of costume changes. The movie does a wonderful job of demonstrating the duality of Elton and his inability to reconcile the two, or maybe three, worlds he creates for himself. He is the remarkable entertainer extraordinaire to most, the ravenously passionate and outgoing friend or lover to some, and the shy, unloved English boy who got lost along the way to a few. It would be a daunting challenge to convey so many facets of one man in a normal biopic, but somehow Dexter Fletcher manages to capture it very well and still give us a hypnotic ride across years of unbridled debauchery, emotion, and of course music.

Elton John was completely on board for Taron Egerton to play him. He even encouraged him to find his own voice in the role, allowing Egerton the freedom to steer the character in a direction that is both a personal tribute and a sincere depiction. Dexter Fletcher worked with Egerton previously on Eddie the Eagle and that turned out to be an amazing collaboration. Here Egerton acts his heart out and this is evident not only in the bigger-than-life performances, but the quieter moments as well. His eyes show a vulnerability that always translates to the camera. The real element I see throughout the entire film that Egerton portrays so brilliantly is exhaustion. When it comes to performance and unlimited potential, Elton John leaves nothing on the table and neither does Egerton. He projects authenticity even when he’s outside of reality.

You could say the editing is erratic at times, but that is pretty standard for musicals. It can be difficult to connect with the story as it traverses from one musical number to another. I would say as soon it might seem the movie won’t give you a chance to breathe, that’s when it lets you.

If you are looking for a straightforward story about Elton John’s life, you won’t find it here. What you will find with Rocketman is a therapy session that you can dance to. I never wanted to leave my seat watching this film, wondering where we would go next. One scene reminded me of an old Hollywood production with the amount of set pieces and wardrobe changes. Taron Egerton is magnificent, but I give Jamie Bell’s portrayal of Bernie Taupin kudos as well. His character is the fraternal bond that Elton always needed in those wild years. Bryce Dallas Howard is brilliant and so is Richard Madden. Madden’s John Reid is clearly more developed than Aiden Gillen’s John Reid in Bohemian Rhapsody, but he also had more screen time. I recommend taking as many friends as you can to see this in theaters. Or go alone if you must and find out that love is waiting out there for you to discover. You’ll have a fabulous experience and leave wanting more movies like this. You may even decide to raise your outfit game.

“The Book of Life” Movie Review