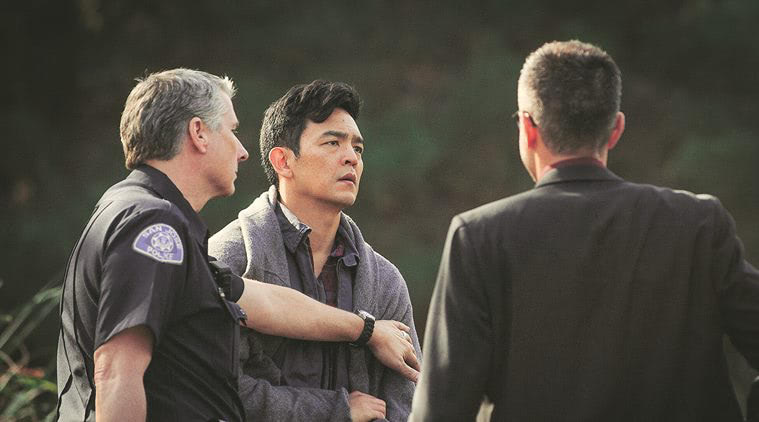 The ingredients of a good thriller are generally the inability to guess what’s going to happen, who the antagonist is, or what their plan is. Good thrillers keep you in suspense whether they skew toward the horror side of things, or offer a more dramatic plot. Searching is a more dramatic thriller and keeps the audience guessing throughout. While there are certainly hints, especially during a second viewing, few will be able to figure out what’s going on until late in the film. Join us as we delve into our Searching movie review.

Searching is a very self-contained film. It focuses on David Kim (John Cho) and what he experiences when his daughter, Margot (Michelle La), goes missing. The emotions run deep in Searching, as some moviegoers will likely shed a few tears during the opening prologue of the film. We see David and his wife, Pamela (Sara Sohn) raising young Margot throughout the years. Pamela passes away, leaving David and Margot to fend for themselves.

After Pamela passes, David and Margot seem to live a fairly normal life. What makes their life and the movie intriguing is the heavy focus on Apple products. While it’s not uncommon for people to engross themselves in Apple’s well-made ecosystem, the entire film is told through the lens of a webcam on their computer, or the screen of an iPhone. At first this feels a little odd, but after a few minutes the computer screen fades from view as the audience gets acclimated to director Aneesh Chaganty’s vision. The screens are still there, but you don’t notice it all, and it feels as though you’re watching any other movie.

When Margot goes missing, David is assisted by police detective Vick (Debra Messing). She is an integral part of the film as she sticks with David from beginning to end as he searches for Margot. David’s brother, Peter (Joseph Lee), also has quite a few interactions with David as he tries to help him stay sane after Pamela passes and Margot goes missing.

All of these characters are moving pieces in a puzzle that many won’t be able to solve until near the very end of the film. Even astute audience members will have difficulty navigating all of the curveballs through around during the film. Chaganty has woven a well-crafted mystery that few will figure out despite the numerous hints left through the first and second acts. There are a few moments of convenience to push the plot forward, but they’re few and far between and don’t take away much from the overall quality of the film.

By the end of Searching you may have difficulty trying to determine if you’re siding with David or simply think he’s going crazy. Either way, you’ll be fully invested in everything unfolding before your eyes. There aren’t many thrillers that can provide that kind of captivation in modern cinema. While there are a few minor issues with plot convenience, Searching is one of the best thrillers to come along in quite some time, and definitely worth a trip to the cineplex this weekend!

Synopsis: After his 16-year-old daughter goes missing, a desperate father breaks into her laptop to look for clues to find her.