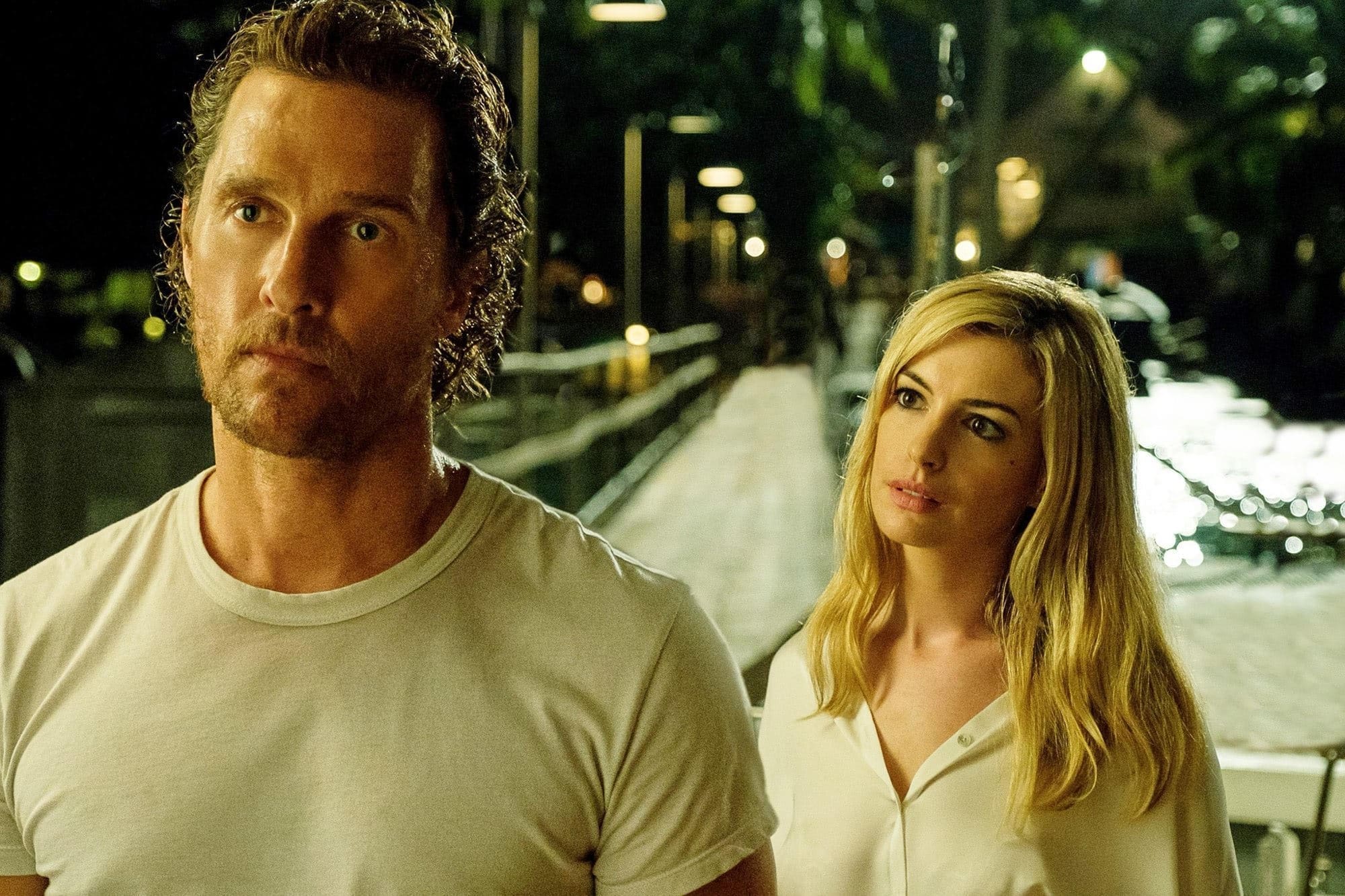 Most movies are fairly straightforward. Sometimes you can guess how things are going to end, and other times an ending may throw you off completely. Then there are the films with huge twists that you simply don’t see coming. Serenity is one of those movies, and while we won’t spoil the twist in our review, it turns a compelling thriller into something that could be classified as stranger than fiction.

Serenity starts off like a typical thriller. Baker Dill (Matthew McConaughey) is a fisherman on a remote tropical island. He has an estranged son, Patrick (Rafael Sayegh), somewhere in the world, but his focus now is on catching a legendary tuna with his sometimes first-mate, Duke (Djimon Hounsou). While there are a number of facets to the island, the focus is on Baker Dill.

When Baker Dill’s ex-wife, Karen Zariakas (Anne Hathaway), shows up out of the blue, things start to get crazy. She asks Dill to kill her husband, Frank Zariakas (Jason Clarke), who is extremely abusive and well-connected within a drug cartel. Most of the film revolves around Dill and his pending decision to kill Frank or pass on the murder request and continue hunting down the legendary tuna.

While a thriller based on choosing between a truncated version of The Old Man and the Sea, and The Professional: Tropical Island Edition may seem strange enough, the twist places Serenity near the top of the list of weirdest movies of the year… and it’s only January. Without spoiling the twist, we can’t really give you the full breath of ridiculousness you’ll experience while watching this film. However, at some points you may think it’s heading in a sci-fi direction. You might even think time travel is involved, but it’s a virtual guarantee you will not be able to call this twist before it happens.

Oddities aside, the film is fairly entertaining. McConaughey turns in his trademark performance of beach bum meets the most interesting guy in the world (which is a good thing), and Hounsou’s Duke character serves as a steadfast conscience for McConaughey’s Dill. There are a few other people on this island, such as Constance (Diane Lane), Dill’s romantic break between voyages, but the focus of the film is on Dill, Duke and the troubled married couple. Anne Hathaway plays up her role a bit more than she needed to, but once the twist is unraveled her overacting makes more sense.

Anyway you look at Serenity, the twist is a huge point of focus. Some will say it wasn’t necessary and the film was fine without it, while others will say it added a necessary oddity that helps separate Serenity from other more traditional thrillers. The problem is that while a straightforward thriller may have a few minor plot holes if you think about it too much, the more you think about the twist in Serenity, the more the movie falls apart.

Anyone can tell you not to think too much about a fictional film, but the strange nature of the twist in Serenity will boggle your mind for hours after you leave the theater. It definitely makes Serenity a talking point, and in some ways it improves the film, but it’s a strange twist on what would’ve likely been a perfectly good thriller without it. Either way, Serenity is interesting enough to warrant a watch, even if just to see McConaughey’s trademark blank gaze.

Synopsis: The mysterious past of a fishing boat captain comes back to haunt him, when his ex-wife tracks him down with a desperate plea for help, ensnaring his life in a new reality that may not be all that it seems.