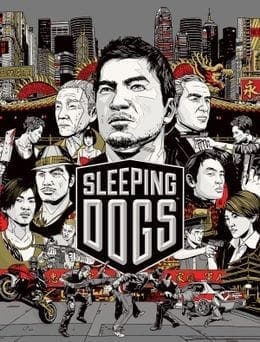 Imagine if the  photo realism of Grand Theft Auto IV had a baby with the impish insanity of the Saints Row franchise, named the baby after the combat in the Rocksteady “Batman” series, and that baby then legally changed his name to “all early 90s John Woo movies”  when he turned 22. That is how I would describe Sleeping Dogs. (I think I have suffered a mild aneurism from permitting my brain to contemplate just how awesome this game could be).

Needless to say, I am immensely excited for Sleeping Dogs and here’s why:

Sleeping Dogs centers around Wei Shen, an undercover cop tasked with infiltrating Hong Kong’s main Triad gang – The “Sun on Yee”. Wei’s loyalties will be tested as he seeks to gain the favor and trust of the criminal organization, including close childhood friends, without compromising his position as a police officer (Think “In Too Deep” or “Infernal Affairs”).

I love Asian cinema in general and am a sucker for themes that blur the lines between what is legal and what is necessary, so giving me the opportunity to make those kinds of calls is very appealing. I think the story has the potential to strike the right chords in people who want to experience this type of mental and emotional conflict without the real world implications.

Boasting “the most advanced fighting system in any open world game,” Sleeping Dogs promises to deliver a combat system that is graspable from both a basic and intricate fighting standpoint. With hand-to-hand combat being an integral part of gameplay, players can execute basic kicks and punches which can be chained into lengthy combos, counters and takedowns.

Most reviews and videos of the game have focused very heavily on this aspect of the game – particularly the environment takedowns- and for good reason. It looks incredibly fun! Drag stunned foes to any of the red highlighted items in the environment and voila! He is in for a world of ball cringing hurt. Want to snap someone’s spine with window shutters? You can! Want to shred someone’s face in an AC fan? You can! Want to impale someone with Swordfish? You can! Want to kick someone in the testicles, watch them vomit said testicles while you cut of their fingers one by one? Then you have some very, very serious problems and the over the top violence portrayed in Sleeping Dogs is most certainly not for you.

Gunplay is downplayed in the game favoring a minimalist approach in this regard.  Instead of arming players with an assortment of weapons, the game encourages the player to scour the battlefield for necessary armaments to gain the upper hand. While this has the potential to make gun battles a little more tedious than other open world games, it provides a little bit of flair by “Slow-Mo-ing” when players break cover, making it slightly easier to land that headshot or execute a sweet disarm. Seriously Wei CANNOT possibly fit a rocket launcher underneath that tank top.

Outside of the combat heavy elements of the game, Sleeping Dogs also appears to have incorporated role playing elements to compliment players distinct play styles.  During the course of the game, players earn experience points which can be invested into three different skill trees- Triad XP, Cop XP and Face XP.

Cop XP on the other hand appears to work directly opposite to its Triad counterpart. From what I can see, players start out with a set amount of experience that diminishes as players injure civilians or cause damage to the world. This impacts the overall ranking at the conclusion of missions and affects what weapons and equipment are available to players.

Face XP dictates how NPC’s respond to Wei in the world. Will they cringe in fear at his ashen face and be more susceptible to his renegade response options, or will then chant his name in the streets and give him discounts in shops? (A dollar for you if you caught the Mass Effect and Infamous references).

I love activities in sandbox games. Not the repetitious escort/high jacking/time-trial/assassination side activities prevalent in many games of the same genre – but the really ridiculous stuff that I can’t do in real life, like blow up gang vehicles from a helicopter or douse innocent pedestrians in raw sewage. As such I know I will spend many hours immersed in Sleeping Dogs fight clubs, karaoke bars and cock-fighting circles. I’ve never cared for cocks, (I’m a cat person), but the prospect of earning money in a good old fashioned cock fight is intriguing. As a young black male I would say my chances are pretty good.

With a story that explores the seedy underbelly of Hong Kong, Sleeping Dogs treads into geographical territory that few games have ventured – and does so extensively. United Front has obviously invested a lot of time in creating a living and breathing environment with the intent of fully immersing the player in the experience.

While it borrows heavily from several heavyweights in the sandbox genre, it combines the best elements from those games into a cohesive whole that shows those influences while distinguishing it from them.

Backed by great storytelling, cinematic production and gritty combat, Sleeping Dogs definitely has the potential to be a breakout title this fall – or at least a sleeper hit going into the holidays.

Check out a couple trailers of the game below: