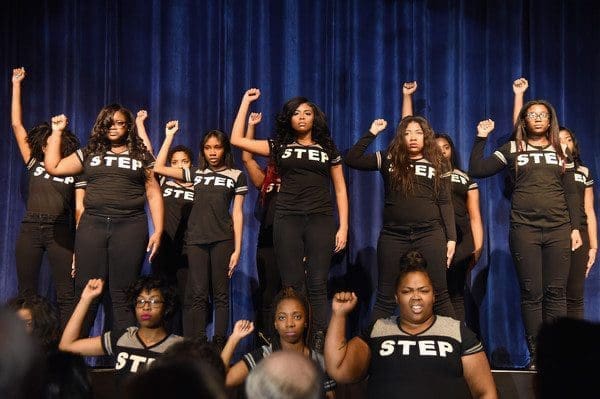 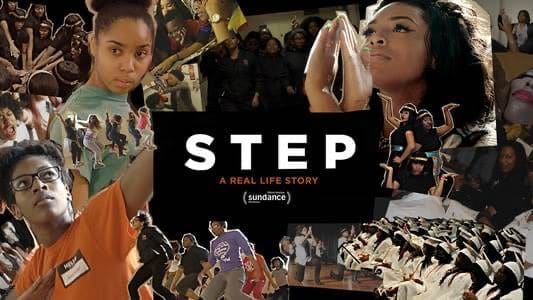 When you grow up, you have dreams and ambitions that far exceed your ability at the time, but you know eventually you will get there.  You practice, study, and improve at whatever skill you think will move you forward.  There will be obstacles in your way, distractions from your ultimate goal, but it’s your determination and resolve that helps you avoid them and stay on target.  If anything the only real danger to not becoming all that you could ever be is yourself.

In Step, directed by Amanda Lipitz, a group of Baltimore high school girls are practicing step dancing, a style that evokes power and intensity with each movement.  Many of the students in this step class are graduating and would very much like to go to college, a first for their families, but what they would really love to do right now is win a few competitions.  The three students this film focuses on are Blessin Giraldo, a headstrong step expert who lets her embarrassment of failure and insecurity plague every other aspect of her life, Cori Grainger, a brilliant student with a clear path to success, and Tayla Solomon, a girl with an overly enthusiastic mom who will see she gets where she needs to go.  The energy and optimism these ladies have at the beginning of the school year is tested on the dance floor as well as in class.  Fortunately they have the support of their family, coach, and principal.

This documentary doesn’t really focus on the dance style in which it is named.  Instead it focuses mainly on the personal lives of the three students and their interactions with their families and each other.  Blessin in particular is the real wild card in the bunch.  She has the talent, but her academics are struggling and her guidance counselor is doing what she can to make sure she goes to college.  Her mom isn’t quite there emotionally, but she makes an effort to stay engaged.  If Blessin hopes to get out of Baltimore, she needs to get out of her own head.  Something teenagers are usually not very good at.  Cori and Tayla have their problems as well, but it’s more to do with discipline.

When their coach can get everyone’s attention in practice, they can come up with some pretty great routines.  As the months pass by, it’s only by a wing and a prayer that it will all come together in front of the judges.  The excitement, dedication, and pride all of these students exude over time gives them the best chance at victory, not just on stage but in life.  When you give a child or teenager a passion and allow them to harness their best abilities in order to pursue and improve upon that passion, you give the confidence to do anything.  The confidence to risk failure and continue on.  The confidence to overcome setbacks or ridicule.  Nothing will mean more to them than realizing their dream.  It’s a perfect scenario and outcome, but we are all human after all and our insecurities are taught to our children.  They may succeed in spite of us, but a better idea would be to lead by example and inspire them as much as they inspire us.

The one thing these kids have that gives them an advantage is perspective.  They know what it is like to be impoverished and underprivileged so they would much rather move on using scholarships and not loans.  Anything to lessen the burden of financial debt on their parents.   It’s this same perspective that could be discouraging Blessin.  Her bad habits are making it less likely she will leave Baltimore intact.  Cori and Tayla have built a foundation, emotionally and mentally, over the struggles they’ve endured growing up and are ready to move on, or at that very least eager to see what’s on the other side of graduation.  Blessin doesn’t seem to have that same internal safety net.  If she is to progress, she will need more will power, support, and a little luck to make college a reality.  If it doesn’t go her way, it won’t be for lack of trying.

Step is a terrific documentary about the perils of high school and expectations.  I was very invested in the lives of these three ladies and the performances were a great part to look forward to.  If I had any criticisms, it would be that the film sort of drags in certain moments.  There is no narration, which is fine because it helps with the immersive aspect, but I felt the movie wasn’t going anywhere until it was halfway over.  Directing issues aside this is a story that will resonate with many teenagers and some adults.  Blessin, Cori, and Tayla are charming and talented individuals and I wish them all the best in their endeavors.  Sometimes you don’t need a guarantee that it will all work itself out in the end.  You just need to know that the ones who love and care about you will always be there when you need them.

Synopsis: STEP documents the senior year of a girls’ high-school step dance team against the background of inner-city Baltimore.