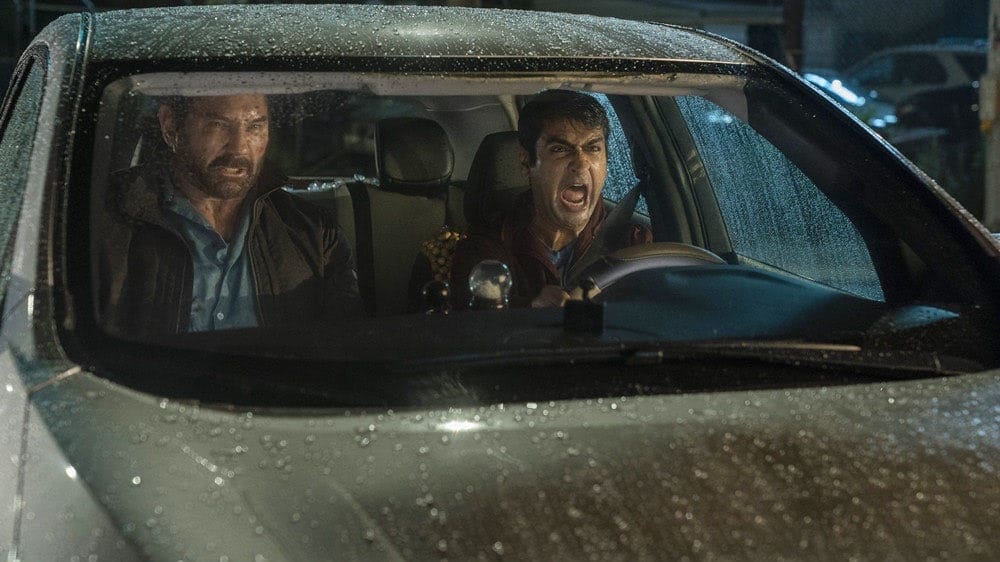 Dave Bautista is best known as Drax the Destroyer in the Guardians of the Galaxy films, directed by James Gunn, and the latest Avengers movies, directed by the Russo brothers. A role he was tailor-made for gave him the confidence to expand his horizons in acting and pursue projects with other high-profile directors such as Sam Mendes, Denis Villeneuve, and Zack Snyder. Still his comedic talent cannot be understated. He seems to exude goofy, lovable, and fierce all at the same time. So it seemed fitting to pair him with a well-known comedian like Kumail Nanjiani for a premise that on the surface feels like a silly 90’s buddy cop caper with a modern twist. Something like the movie 48 Hours, where two complete opposites must help solve a crime before it’s too late. You couldn’t ask for a more compatible concept for these two actors.

In Stuber, directed by Michael Dowse, Stu (Nanjiani) is a sporting goods employee who works part-time as an Uber driver in the Los Angeles area. Vic (Bautista) is a veteran cop trying to solve a case that went cold when the prime suspect Teijo (Iko Uwais) got away. Vic blames himself for the handling of the case and, learning that the F.B.I. will be taking over, decides to put his career on the line in order to capture Teijo.

A poorly timed laser eye surgery appointment causes Vic’s vision to be severely impaired during this important day; so he must rely on Stu and his car to help him navigate the streets in order to finally put Teijo behind bars. Vic must figure all this out and still make it to his daughter Nicole’s (Natalie Morales) art gallery. Stu also has plans with a woman named Becca (Betty Gilpin), but neither of these men are prepared for the troubles they are about to face.

I was excited when I heard the premise of this movie and who would be in it. I later learned that Dwayne Johnson and Kevin Hart turned down this project, presumably so they could work on the next Jumanji sequel. Since those two have done several comedies together already, I’m glad they cast Bautista and Nanjiani. It’s a combination we haven’t seen and, not surprisingly, the chemistry is perfect. Kumail’s character is sarcastic and has a dry wit that manages to put any situation into perspective, but then he completely unravels the more his patience is tested every time Vic demands something more of him. Bautista’s use of his temporary blindness and intimidating persona provides such a funny addition to the scenes. When the movie’s tone begins to rise to absurdity, Bautista either joins in and enhances that absurdity or brings it down and adds some modicum of realism. At least as much as is humanly possible for a film like this.

It teeters towards Saturday morning cartoon as far as believing these are real characters. There are genuine heartfelt moments from time to time, but they are fleeting and washed over by the crazy antics and random jokes spread throughout. In fact that is the biggest problem with the movie. I love Kumail Nanjiani, but I felt he was going for broke with his one-liners and comedic bits. Sometimes I felt like he was still doing a Saturday Night Live sketch than acting in a movie. I put some of the blame on the script and directing choices.

I still had some hard laughs, some of which were less funny since they were already introduced in the trailer. If a moment is funny, it should still be funny no matter how many times you see or hear it; but since there are more moments that don’t hit for me, it makes what should be a hilarious moment feel less interesting. It brings the overall enjoyment down. Fortunately this doesn’t destroy the movie as a whole.

Stuber is a decent buddy comedy that doesn’t fully execute to the best of its abilities, but you will get a few really good laughs out of it. Dave Bautista does a great job and Kumail Nanjiani’s performance isn’t bad either. As a duo they are excellent. I also enjoyed Natalie Morales as Bautista’s daughter. What little time we have with her is actually very refreshing and a nice reprieve from the madness that envelops this story. I’m partially recommending this in theaters because sometimes a joke or comedic moment hits people differently and you might get more out of it than I did. I mean I really liked Let’s Be Cops and that’s no award winner. I look forward to what both Bautista and Nanjiani do in the future. I just hope they are given a better script.

Synopsis:  A detective recruits his Uber driver into an unexpected night of adventure.