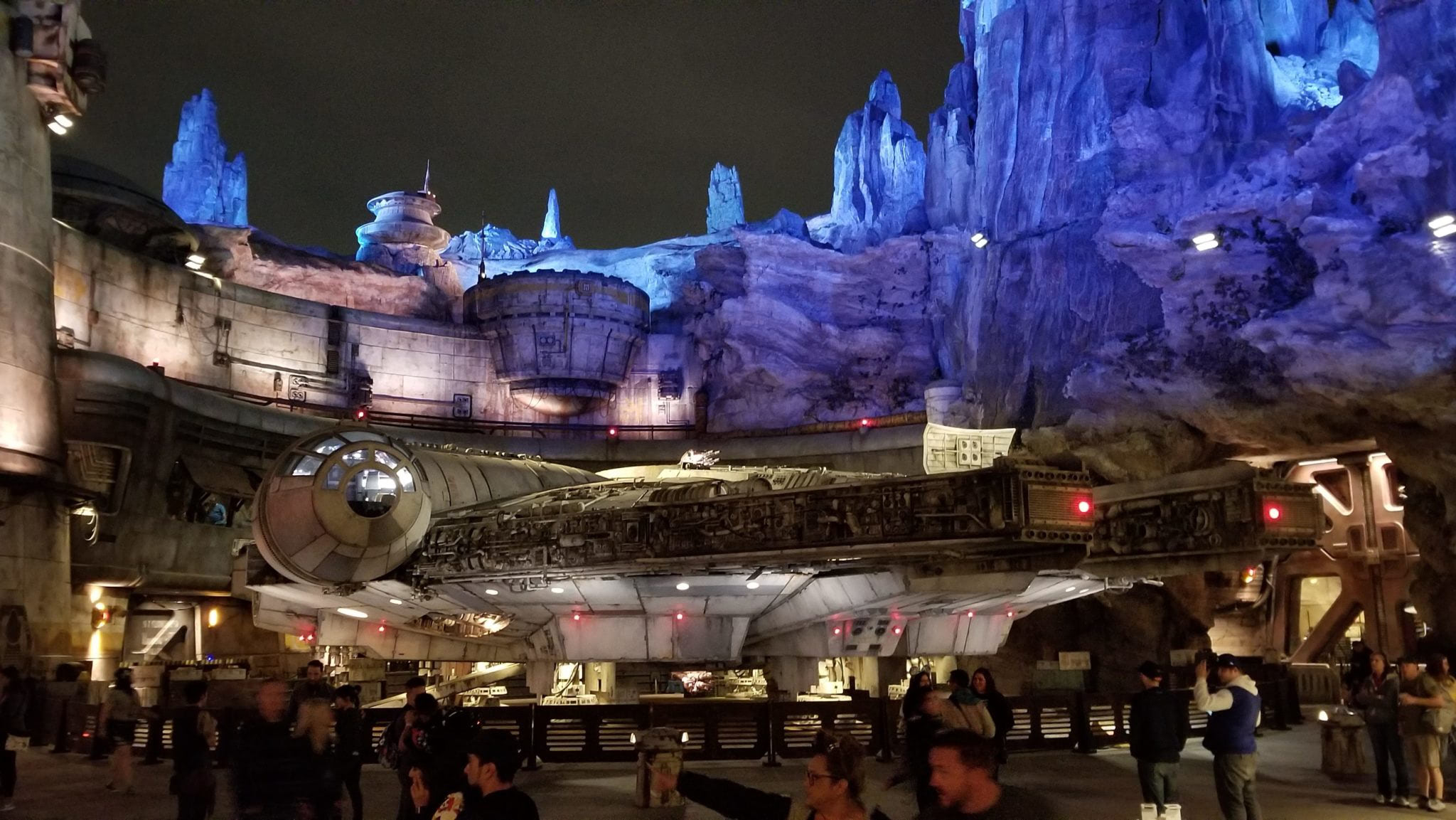 Galaxy’s Edge, Disney’s long-awaited Star Wars themed addition to Disneyland, has finally opened up to the public. I was lucky enough to be able to visit Batuu, the city in Galaxy’s Edge. I am here to share what I learned and what I saw during my time there.

Let’s start with the atmosphere. I was able to enter the land through the pathway by Critter Country. To go from singing and dancing animals to Batuu was almost jarring. The scenery slowly changed as the sounds got less and less familiar. You could hear the sounds of the nearby alien creatures and the hustle and bustle of the city as you approached the shops. On your right you see a newly landed X-Wing fighter as well as a cargo ship. There is no music loop in Batuu, it is all sound effects of day to day life of this planet.

As I walked around the corner I came up on the shops and it was amazing. This really made me feel like I was IN a Star Wars galaxy. The way they were lit up and open like a street type setting was unique and unlike any Disney store I have seen. My first stop was the Droid building facility with its key 3 droids on the outside that you can use your data pad (Phone) to hack into.

The experience is pricey at $100 per droid, but it was a lot of fun. I chose to build an R2 unit. You start at a conveyor belt and pick out your parts then you move to a building station. At the building station you use the directions and tools to build your droid. Once your droid is assembled you get the cast-member to help you pair and box up your droid and BOOM you are done. Your droid will interact with the land around you and also other droids! My little guy was beeping and booping all night long at everyone and everything. It was a lot of fun.

There is also a lightsaber building experience, but I did not do that myself. It costs $200 to build a saber and you have to have a reservation. You can reserve your spot through the Disneyland app on your phone the morning of your day in the park. I have heard many good things about this experience, I just didn’t do it myself.

Around from the Droid area is the First Order location. There you can see Kylo Ren’s ship and stormtroopers wandering the grounds. There is also a shop there with all First Order and Imperial merchandise.

As you loop all the way around you come into the center, the show stopper, the Millennium Falcon. There it is in all its glory. Now being a huge Star Wars fan I just about died. It was huge, it was beautiful, and I was going to fly it.

That leads me to the next adventure. Next to the Falcon was a large cargo hold where the line entrance for Smuggler’s Run was. While the ride was amazing, the queue itself was just as amazing. As you wind through the queue you can see the Falcon from every angle and it is beautiful. When you reach the top you are greeted by Hondo who is explaining your mission and allowing you on board the Falcon. Next thing you know you are on the ship and being given your position.

There are two pilots, a left pilot who moves the Falcon left and right, a right pilot who moves the Falcon up and down, two gunners, and two engineers who fix the ship as it is damaged. The ride is extremely interactive and a whole bunch of fun. Think Star Tours but with a video game twist to it. It was a blast, I rode it twice and was pilot both times. I will say being the pilot is probably the best view and job.

While I didn’t eat in Batuu, I did buy the blue milk and I loved it. It is a very light and refreshing drink. I would say its very much like a fruit smoothie, but not overpowering. I did not try the green milk.

I was lucky enough to end my day seeing the beautiful fireworks against the black spires of Batuu and it was perfect. While the music does not play for the fireworks in Batuu, it is the best view you will get.

Have you been to Galaxy’s Edge? What did you like the best? Let me know in the comments! Make sure to check out my other articles here.

‘MARCEL THE SHELL WITH SHOES ON’ Review | Infinitely Charming