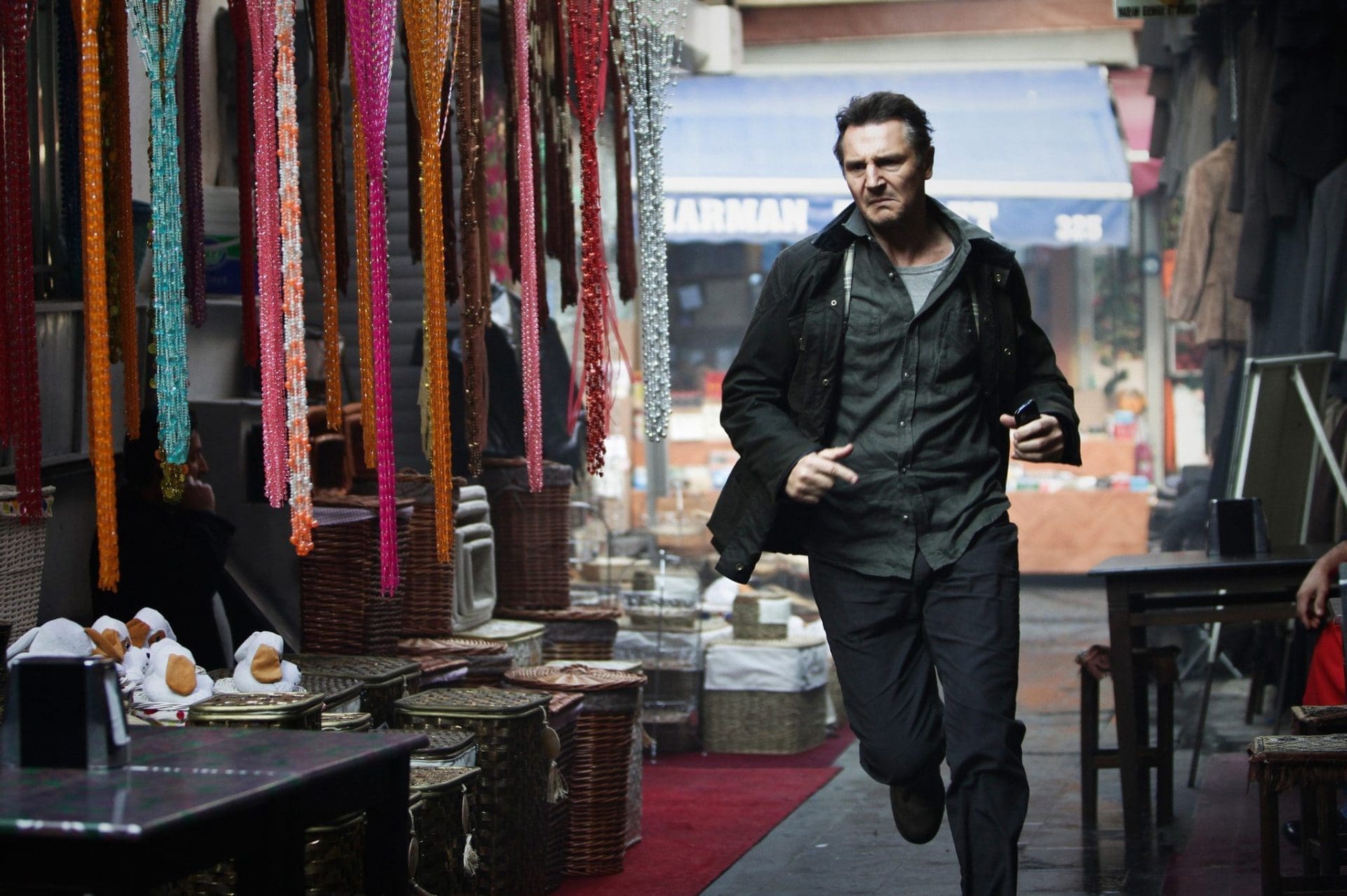 A good action movie can be forgiven for its share of clichés, one-liners, predictable plot twists, and unresolved plot holes.  Hell we almost expect them to a certain extent.  But when a movie goes out of its way not to take itself seriously, you wonder if the director wants us to either.  Not that this second sequel to a brilliant 24-style thriller isn’t worth a look at.

In Taken 3, directed by Olivier Megaton, Bryan Mills (Liam Neeson) is enjoying his time in Los Angeles with his daughter Kim (Maggie Grace) and hanging out occasionally with his ex-wife Lenore (Famke Janssen).  Another character that returns from the first movie is Lenore’s husband Stuart, now played by Dougray Scott.  It isn’t clear when they got back together, but it seems Stuart made some shady deals with unsavory men and one of those men, who goes by the name of Malankov, is out to kill him and his wife.  The wife being his first target and her death is done in such a way that Bryan becomes framed for her murder in the process.  Not one to be taken himself, he escapes the cops and proceeds to Bourne Identity his way through the streets of Los Angeles.

Bryan’s main priority is the safety of his daughter, who is under constant surveillance by the police.  The investigation and pursuit of Bryan is headed by Detective Franck Dotzler (Forest Whitaker), a man with more than one quirk throughout the movie.  He twirls a rubber band in one hand and holds onto a knight chess piece in the other as he examines each clue and crime scene left in the wake of Bryan’s own investigation.  Dotzler knows how clever Bryan is and tries to get to him by following Bryan’s daughter, but it doesn’t do much good.  In fact it never seems as if the police are ever any closer to getting to Bryan.  Some of that luck has to do with the help of his former CIA partners, who get a lot more screen time now that the action is in their backyard.  Their inclusion in this caper puts this film above its previous sequel.  There’s more camaraderie and dialogue worth listening to, if you ignore the cheesy lines from the bad guys.

One movie that came to mind immediately when they killed off Bryan’s wife and sent him on the run is The Fugitive, propped up by a small scene where Bryan is even traipsing through a sewer just as the cops are on his tail.  The similarities stop there, however, since Forest Whitaker doesn’t make nearly as compelling a performance as Tommy Lee Jones did.  He does do a good job not making his entire police force look incompetent and at least tells us that Bryan is too smart for them.  Yet they still go through the typical police procedures, hoping something Bryan does will tip them off.  Of course everything he does to tip them off is by design and only leads them through the clues of his framing, much like The Fugitive.

I should state for the record how much I love the first Taken movie.  It packs such an emotional punch and builds suspense so well that you are really invested in the outcome.  Every scene drives the story so well and never makes the audience feel like they are watching a typical action movie with crappy dialogue and mediocre acting.  It was a brilliant film that ended on a good note.  It’s not impossible to imagine Bryan getting into more trouble down the road, but the unrealistic sequel set in Turkey was enough to make you put this character to rest.  Yet if they were going to do another Taken, you’d think the studio would fix the problems of the second movie and go back to what made the first so great.  They did fix the pacing a little and improve upon the interactions of Bryan with his partners, but unfortunately they kept Olivier Megaton and he made some ridiculous choices with Liam Neeson’s character.  For starters we never know how he appears somewhere out of thin air.  He’s like Houdini in several scenes.  Bryan also escapes death on more than one occasion with not just luck, but unrealistic luck.  I wouldn’t care so much, but when you no longer expect the hero to ever be in danger, it takes away all the tension and your just sitting in your seat waiting for the inevitable outcome without enthusiasm.  If an elevator shaft blows up, and they show a person one second earlier in that shaft, you can’t just have that person pop up on a roof in the next scene without some explanation.  It may be unfair of me to expect more from this franchise, yet this director makes no effort to avoid shoving plot hole after plot hole in your face.  I suppose you can take heart that the action is still top-notch.  I only wish Bryan Mills did a better job avoiding innocent casualties.  One scene on a freeway must have yielded a dozen deaths and there was no follow-up to that situation.  At the end of the movie, it’s never addressed.

I still recommend this movie for action fans and fans of Liam Neeson obviously.  There are plenty of things to laugh at intentionally and unintentionally; and while I have many complaints about the approach to this continuing story,  I can say that it is the better sequel and the one that should have followed the first movie.  Whatever happened to Kim’s music career?

Synopsis: Ex-government operative Bryan Mills is accused of a ruthless murder he never committed or witnessed. As he is tracked and pursued, Mills brings out his particular set of skills to find the true killer and clear his name.