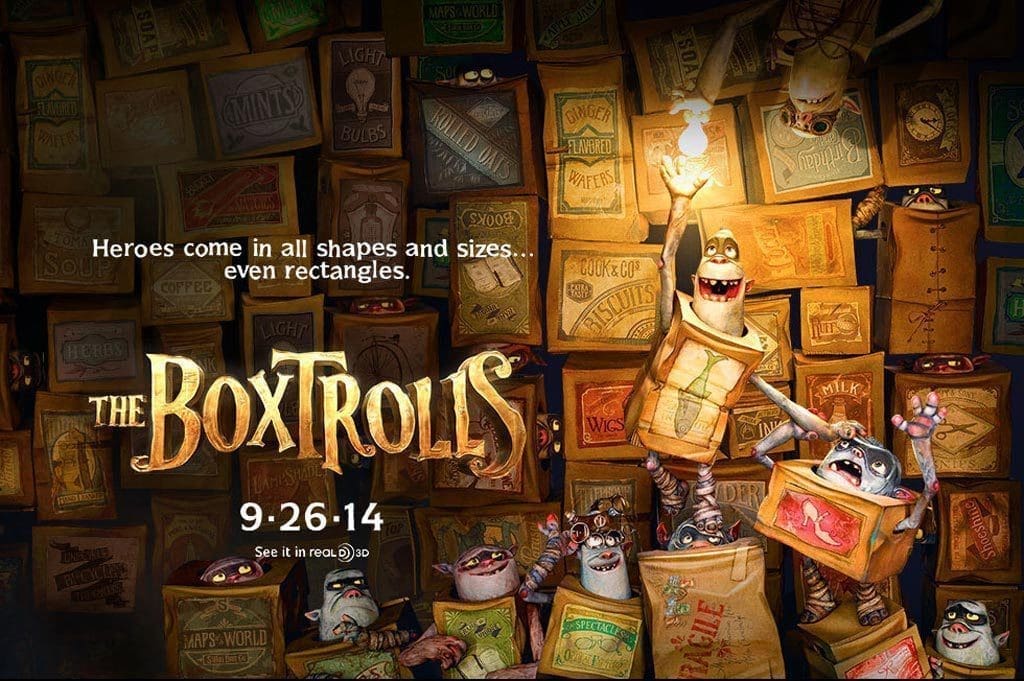 Coming from the makers of “Coraline” and “Paranorman” one expects a quirky visual treat that also entertains and tells a compelling story.  “The Boxtrolls” delivers this and more.  The Boxtrolls is a beautifully constructed film, which delights the eyes as well as the imagination.  The Boxtrolls themselves, a mix of ninjas, Transformers and minions from Despicable Me, have their own individual personalities and looks.  They, and their human co-inhabitants, are brought to life by the superb acting skills of Sir Ben Kingsley, Nick Frost, Elle Fanning and Richard Ayoade.  The worlds they inhabit, one above ground, one below, both have their own unique personalities as well.  The amount of work which went into this film is readily apparent everywhere you look, and is certainly worth multiple viewings just to see all the details.

In this magical world under the streets we find Fish, the human boy, (Isaac Hempstead Wright) and Eggs, the Boxtroll who serves as his father figure.  Through a montage we see how Fish has grown up from a baby into the 10-year-old boy of the current story.  The Boxtrolls sleep during the day and sneak out at night to collect the “treasures” that the human world has thrown away.  They take this bits and pieces and build wonderful contraption that aid them in their lives, but just as many are for the sheer beauty of making them.  Though the Boxtrolls are harmless and peaceful, hiding whenever humans are around, they become wrongfully accused of stealing a human baby and that’s what bring in the greasy Boxtroll exterminator Mr. Snatcher, (Kingsley) scheming to work his way into the upper crust of a society that holds him in disdain.  He might be a somewhat sympathetic character if he took any of the chance provided to him to change his course.  His henchmen have far more conscience than he does, and the slow realization of their misguided thinking that they are the good guys, is witty, well written, and fun to watch.  Here the voice talents of Nick Frost as Mr. Trout and Richard Ayoade as Mr. Pickles really shine through.  As we learn more of Mr. Snatcher’s scheme the truth of Fish’s origin become more clear.  Helped along with this by Winnie (Elle Fanning) the disregarded daughter of the town’s Mayor, who wants to shed light on the truth of what is happening to the Boxtrolls.  I spent half my time feeling badly for how Winnie is treated by her father, and the other half being annoyed by this brash, know-it-all girl who reminded me of Margaret from the Dennis the Menace comic.

The story is fast paced enough to hold the interest of children, and engaging enough to hold an adult’s interest as well.  The story isn’t perfect, but it is entertaining enough that the few plot holes aren’t enough to jar you out of it.  (Just how did the human boy learn to speak English?)  The Fish out of water scene of the human boy finding himself interacting with humans for the first time showcases a good bit of how odd “polite” behavior is.

I thoroughly enjoyed myself with this film and I was disappointed when it ended and I had to leave the beautiful world that I had been watching for the last 97 minutes.  Even though the story resolved, the world that the film makers have created was so enjoyable that I had a hard time letting go. In case you get to the end of the movie and have forgotten that it is a hand-made, stop motion animation film, there is a wonderful visual that shows just how much work goes into making a film like this.  That amount of work, and love, is apparent and makes The Boxtrolls a film well worth watching.

Synopsis: A young orphaned boy raised by underground cave-dwelling trash collectors tries to save his friends from an evil exterminator.  Based on the children’s novel “Here Be Monsters” by Alan Snow.

Rated: PG for action, some peril, and mild rude humor