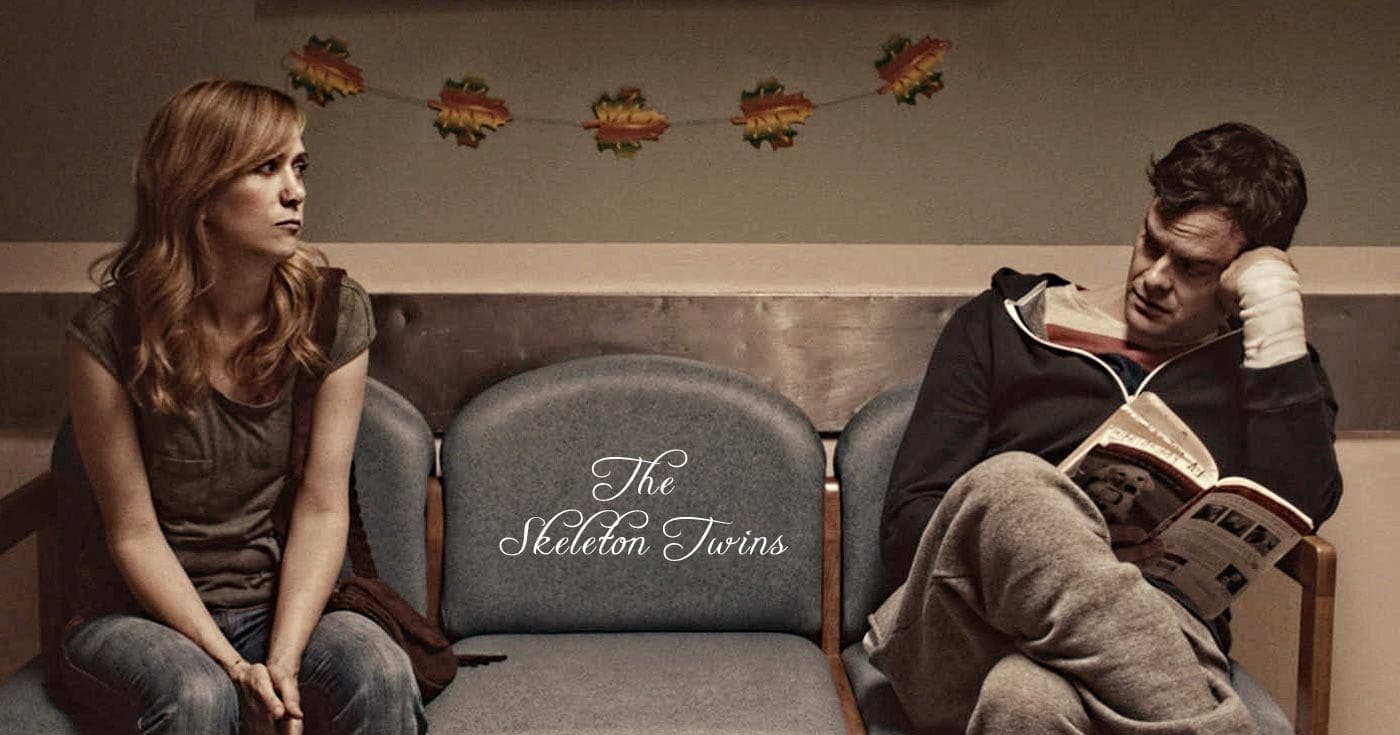 I went into The Skeleton Twins not expecting too much.  I hadn’t really seen anything about it, and with the two main stars being Saturday Night Live cast members I was just hoping that the story would make up for the casting.  I am sorry that I had any doubts. Kristen Wiig and Bill Hader delivered amazingly nuanced performances, and their years together on SNL surely contributed to the chemistry that they brought to their roles.  Wiig and Hader are two very flawed twins, and we don’t really see much of their relationship or personalities right off the mark.

We begin with Milo (Hader) in his apartment, drinking and lamenting an ended relationship; he gets into the tub and slits his wrists.  The next scene is his sister Maggie (Wiig) about to take a handful of pill in her own suicide attempt, though she is stopped by the call coming in that her brother has survived his attempt.  It has been, we find out, ten years since the two had spoken.  Small details of their past are revealed, bit by bit, in order to let us fill in the blanks of why and how they have gotten to the places in their lives where they are.  Milo, a failed actor waiting tables, Maggie, married and in what should be a happy life with her caring husband Lance (Luke Wilson).

Milo and Maggie begin to tentatively find the very close relationship that they had as children.  We discover the reason for their parting and estrangement and the things we are seeing begin to make sense.  Not in that they get worked out, but rather we understand why the two are who they are.  Many of their interactions are painful to watch, and it was easy to forget that I was watching two actors and not two people.  They don’t know how to be around each other any more, but they begin to mesh again.  There are many points when you want to shake the main characters and call them out on their stupid choices, which is proof, to me, of how well written and acted the characters are.

At the end of the movie, the two are no less flawed, and there are many things that one wishes they would say to each other, that would make their lives easier.  It really is like watching a relationship between two of your friends and trying to stay objective, hoping for the best, but knowing they have a long way to go.  While the story is well written, and we are left at the end of one chapter, hoping that their next chapter is brighter, the almost suicide that each of them has at the beginning is never really addressed.  They seem to have saved each other, and hopefully that is enough.

I left the theater not believing that 93 minutes had gone by.  I had laughed, teared up, been knocked down, and wanted the ride to keep going.  I am so very glad that I watched this film, and I highly recommend it.

About The Skeleton Twins

Synopsis: Having both coincidentally cheated death on the same day, estranged twins reunite with the possibility of mending their relationship.

Rated: R for language, some sexuality and drug use