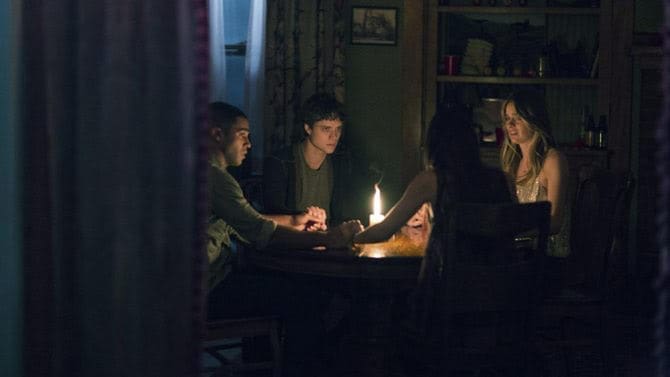 Horror films have a common denominator in that they’re all meant to scare us, and not all scares are instantaneous.  Some can build inside your head over time until eventually, it becomes impossible to stop thinking about it.  A horror movie can either scare you by bringing up certain fears and placing them in a story that affects you on a personal level, such as psychological torture or terrifying situations that you could easily see yourself in, or it could take one fear, the unknown, and use a frightening character to personify it.  The latter is one way for a franchise to brand itself and make an audience remember a particular person or creature as the mascot of that brand.  Even if the movie is bad, you still remember the image of that character and know which franchise it belongs to.  It does make it difficult to evolve that franchise when all anyone wants to see is that same character over and over again, but if the writers are creative enough they can make compelling stories for years to come.  Let’s hope they fix this next entry’s mistakes before it ever gets to a sequel.

In The Bye Bye Man, directed by Stacy Title, Elliott (Douglas Smith), his girlfriend Sasha (Cressida Bonas), and his best friend John (Lucien Laviscount) have decided to rent a house in the woods that is several miles from their college campus.  During a housewarming party, Elliott discovers strange writing in a nightstand.  When their psychically gifted friend Kim decides to conduct a seance, after Sasha heard strange noises the previous night, she determines a dark presence is lurking within the walls of their home.  Elliott is unconvinced and nonchalantly utters the words written in the nightstand, which begins to obscure everybody’s reality that hears it.  The further they investigate the writing in the nightstand, the worse things become.  They must figure out a solution to this curse before they are forced to face the inescapable monster reaching for them from the shadows.

As with most horror films, the concept is far better than the execution.  You have an entity that grows stronger the more you think about him or say his name.  There are so many ways you could go with that idea, but in this film, it doesn’t quite come together.  Freddy Kreuger had a similar weakness to him in The Nightmare On Elm Street movies.  The more people knew of him and feared him, the stronger he became.  Except with Freddy Kreuger, you knew exactly what his abilities were and how he could use them.  The Bye Bye Man just isn’t established properly as a character and many of the scares attributed to him are random and lack context.  When we finally do get a backstory to the Bye Bye Man, it barely makes sense.  He can control your reality but chooses to do so sparingly.  He encourages death and mayhem but isn’t in a rush.  I can understand a predator playing with its prey before it eats it, but this movie doesn’t make that a compelling enough angle.

Another misstep with this feature film is the acting and dialogue.  Our main characters go from having one, supposedly, supernatural incident to suddenly believing a malevolent force is out to get them and they are already trying to figure out how to stay alive.  They don’t conduct any research about the writing first or call paranormal investigators to confirm their suspicions.  They are in full panic mode without any buildup.  Their interactions also lack depth and don’t feel natural.  You can tell they are reading lines and in some cases, those lines should have been reconsidered.

The Bye Bye Man does get credit for having some successful scares in it and giving us a fairly eerie atmosphere inside the house.  I only wish it stayed at the house and built on its isolation as a possible reason for everyone’s descent into madness.  Unfortunately, the Bye Bye Man is shown too much and what is shown resembles a Buffy the Vampire Slayer character.  Leaving him in the shadows or finding some clever way to edit his presence into the scary scenes would have made his character more frightening.  Instead, with the exception of one scene, he’s the least scary part of this movie.

The Bye Bye Man is not a good horror movie, but it gives one hope that a sequel can resolve the errors in judgment made from this film.  There are recognizable actresses in this movie, but I can’t fathom anything worthwhile, other than a paycheck, that brought them here.  Doug Jones does make an effort to give his Bye Bye Man character nuance, but he isn’t directed well and it’s a waste of his talent.  There is very little to praise about any movie released in January, especially a horror movie.  Studios use this month to offload projects they’ve lost faith in, but they still hope they can make their money back.  On the rarest of occasions,  you may stumble upon a gem, but this isn’t one of them.  So unless you are easily scared or don’t care about logic or compelling characters, you’re better off not giving this movie another thought.

About The Bye Bye Man

Synopsis: Three friends stumble upon the horrific origins of the Bye Bye Man, a mysterious figure they discover is the root cause of the evil behind man’s most unspeakable acts.