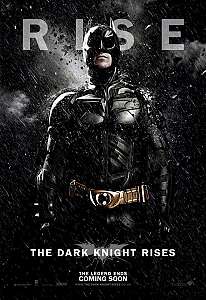 I would foremost like to express my condolences to all who were affected by the tragic shooting in Colorado. As a film goer and a human being there is absolutely no reason why that should have happened and I wish the families and friends of the victims the best during this difficult time.

Since this is my first post on Geek News Network I find it only fitting that it is a review for “The Dark Knight Rises.” Batman has always been my favorite comic book/movie/tv show character, I have a Batman tattoo for goodness sake. I can’t remember the last time a movie has been this highly anticipated since the day after its predecessor, and we had to wait four long years for this bad boy to be released. Now the time is finally arrived, but was it worth it? I’ll try to be as spoiler free as possible since this movie has twisty twists in it.

The movie starts with Batman being absent for eight years and Bruce Wayne sulking in his mansion. Gotham is at peace…until a masked thug, known only as Bane, shows up to wreak havoc at…the stock market? Seems silly, but it’s actually quite clever once it’s revealed what he was doing there, and thus the struggle between Bats and Bane begins.

Let me just say that this in no way does this movie compare to Return of the King in terms of third entry quality, but it is a huge step up from the likes of Spider-Man and X-Men. There really was no way this movie could overcome the massive amount of hype it had generated. I had astronomical standards for it and they just weren’t met.

I’ll start with my first concern, Bane’s voice. I was an advocate for its sound from day one, and I still am. My problem with is that it always sounded like a voice over. While the other characters sounded like their voices were actually coming out of their mouths, Bane felt like he was an omniscient narrator like Edward Norton in Fight Club.

Second, there was no build up to Batman and Bane’s first encounter. In the comics Bane is fascinated by Batman and wears him down, which I always thought was kind of cheating, before he “breaks the bat.” In the movie it felt like a scheduled boxing match. Selina Kyle leads Batman through the subway, which is probably the weirdest scene in the movie, I mean, Batman never walks anywhere, he’s always just there, into Bane’s hideout. Not only is Bane physically more powerful than Batman, he knows it, which makes him even more menacing, but the fight left something to be desired. The trailer just felt scarier as Batman just looked exhausted while Bane pretty much skipped up to him to punch his face in. Make no mistake though, this fight is brutal.

Third, the music in the previous two movies was subtle and was almost like a supporting character. Hans Zimmer’s score here was in your face. I found myself becoming distracted with it during some parts of the movie.

One of Nolan’s strong suits with these movies is his ability to portray multiple villains. He was able to overcome that super hero curse by portraying them as absolutes. They just were. No origin stories. And while not extensive The Dark Knight Rises does delve into the villain(s) back story(s), but they are important because the stories play a part in the overall narrative. With Batman Begins and The Dark Knight being grounded so much in reality, The Dark Knight Rises was like a living comic book during some aspects of it (Crane’s courthouse for instance).

Anyway, let’s get down to it. Should you see it? Absolutely. Don’t let my few nitpicks deter you. I for one will be seeing it at least two more times. I would also recommend seeing it in IMAX, just make sure you don’t sit in the second row like I did. In my humble opinion Christopher Nolan successfully maneuvered the dangerous pothole that is the comic book trilogy curse and delivers a solid movie with a fitting ending. For reals, I really enjoyed the ending, Sometimes the ending of the movie can really make up for what happen the previous two hours, or in this case, the previous three.