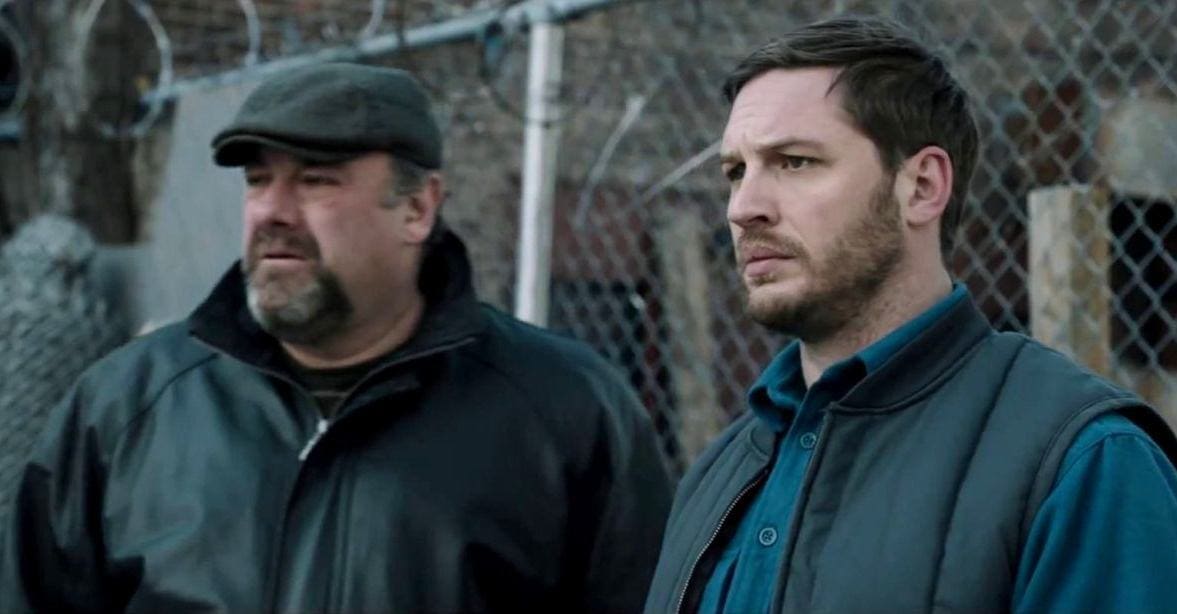 If you’ve read Dennis Lehane’s work, or seen the movies his books have been adapted into such as Mystic River, Gone Baby Gone, or Shutter Island, you know he likes to bring out a story from within his characters.  The deeply rooted issues they manage to live with day in and day out until someone or something causes them to deal with it head on.  Realizing interesting characters like that requires great actors and Lehane’s newest film brings us several.

In The Drop, directed by Michael R. Roskam, Tom Hardy plays Bob Saginowski, a quiet bartender in Brooklyn who keeps his patrons happy while also occasionally keeping money safe that’s delivered by organized gangsters in the neighborhood.  Many bars begrudgingly accept this task and are known as drop bars for this sole purpose.  Bob’s employer is his cousin Marv, played by James Gandolfini.  His managerial style is abrasive at times and Bob accepts it for what it is.  At some point early on, Bob discovers an injured puppy near a woman’s house.  The woman, Nadia (Noomi Rapace), encourages him to keep the dog and give it a good home.   Bob is reluctant at first, but you can’t deny the affections of a pooch that cute.  After a robbery at the bar, the mafia decides Bob and Marv are on the hook for the stolen money.  Which means they must identify and locate the thieves.  The situation gets dicey from then on.

The movie is a mellow thriller.  It doesn’t try to throw things at you, but rather introduces you to characters that have wandered down dark paths and are trying to make better decisions.  Although when you live so close to the devil’s playground, you find yourself back in there from time to time.  The name of the short story this movie is based on, Animal Rescue, is an appropriate title.  Tom Hardy’s performance really gives weight to the film with how he responds to each obstacle and challenge.  Much like his character Locke in the movie of the same name, Bob’s attitude is even almost throughout; and his words are always calculated.  There is a hidden, harder quality to him that he keeps close to the chest because he’s trying to be a better person.  Unfortunately other forces are working against him such as his dog’s previous owner Eric Deeds, played by Matthias Schoenaerts.  Eric doesn’t care about the dog and would rather see it dead than let Bob look after it.  He just adds onto Bob’s already full plate of problems.  Matthias plays this character really well.  He makes you think Eric is capable of something awful without ever having to lift a finger.

One can’t examine this movie without mentioning Jame’s Gandolfini’s performance.  It has been more than a year since his passing, but he leaves us with one final example of his talent.  His flawed, bitter character is presented to us with genuine remorse and desperation.  You can see the bad decisions playing out in Marv’s eyes.  The worry and paranoia that a bullet will find him at any moment.  James plays these characters effortlessly and it is a shame there won’t be anymore works from him after this.  Our only solace is the library of work he left behind.  He will be a continued inspiration for actors working today and in the future.

Overall the movie is a simple tale of one man’s struggle to make the right call in a dangerous situation.  There are no big explosions or outrageous shootouts.  Just good dialogue between actors who know how to engage an audience.  Sometimes the film didn’t seem to flow very well, but I think that had more to do with the editing.  There are several scenes involving a cop trying to piece the robbery together and solve an old murder, but they didn’t seem particularly interesting or necessary.  I never felt for a moment anybody was going to get arrested because it would have just stalled the plot’s momentum.  Everything you see tells you the only way this gets resolved is on the streets.  Noomi Rapace does a decent job as the friendly, not-quite-girlfriend to Bob, but Tom Hardy, James Gandolfini, and Matthias Schoenaerts make this film shine.  Characters that intrigue you with what they don’t reveal outright emotionally always make a story better.  The Drop certainly has its share of subtle personalities and those terrific nuances will leave you satisfied.

Synopsis: Bob Saginowski finds himself at the center of a robbery gone awry and entwined in an investigation that digs deep into the neighborhood’s past where friends, families, and foes all work together to make a living – no matter the cost.