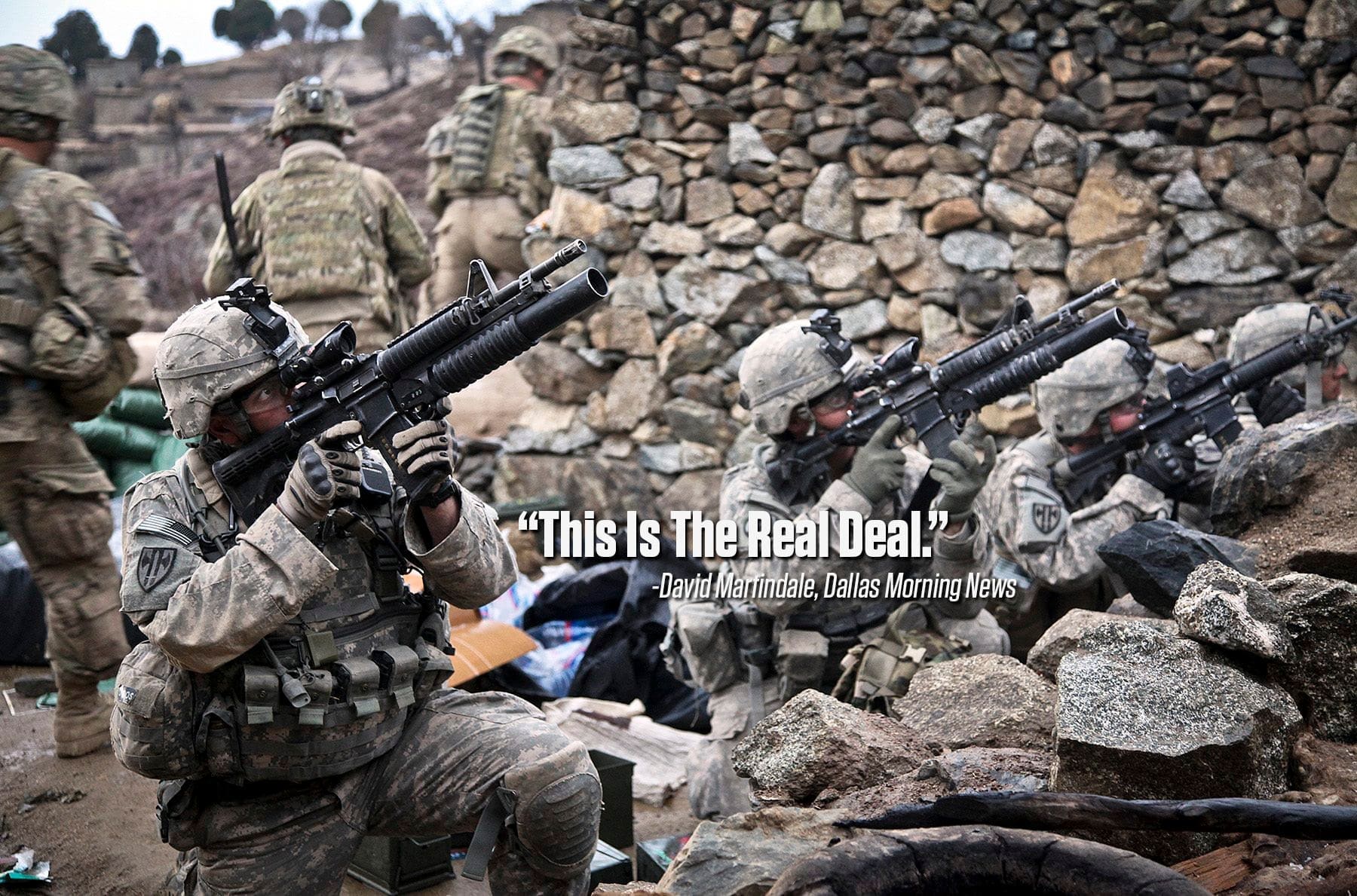 Jumping right into Kunar Province, we open on a group of soldiers traversing the mountains of Afghanistan. Mike Boettcher, a journalist with 34 years on his belt, goes to Afghanistan with his son, Carlos, to cover the war on terror. Documenting every daring step into terrifying territory. This is their bold experience.

Immediately, we find ourselves deep in the trenches of war with one particular squadron against who-knows how many ghost Taliban circling around our soldiers. Firing randomly at the dirt around our heroes. Chaos unfolding. Adrenaline rushing. Bullets zipping. Then suddenly, all the violence stops. Not because the war is over though. But because we flashback to a year earlier. And now we, as an audience, are compelled to watch from start to finish. The old hook-them-with-the-climax-early-on trick. Well, it works.

We meet Mike and his family. His life, his career, and how being a war correspondent deeply separated those things from each other. But his son, who just wants to know and understand his long absent father, decides to tag along with Mike as he heads to Afghanistan. And this is what becomes the underlying but driving sub-story. Father and son bonding alongside these brave heroes.

There’s a lot of interesting imagery in this film that will definitely impact on some level. Images stemming from a soldier fully loaded with weaponry hanging off his body as he bobs to the music on his iPod. It is a rather complex contrast of violence and peace all in one. Another image that definitely carries some emotional weight is that of a pair of boots, rifle standing upright and tall in between, and a picture of the fallen soldier who died for everything and everyone they love. That right there, is an image you won’t soon forget. And the bonds between soldiers grow so quickly and can easily be taken just as quickly. The love and respect these soldiers have for each other is honorable.

The film has no problems keeping you on edge, uneasy. Danger is always lurking around every corner. And everyone, soldiers and viewers know it, and all they can do is laugh it off. Say everything with a smile. Because in the end, they understand why they’re there. Putting their lives in danger for those whose lives are worth fighting for. Once they can pinpoint where the gunfire is coming from and take shelter quickly, they can eliminate enemies with retaliation gunfire, heavy artillery, and fighter planes. But soon after more random shots come from somewhere unseen and it becomes a never-ending circle of back and forth fighting.

What’s most gut wrenching about the film is how adjusted these soldiers are to the carnage around them because they have to be. If they want to survive, they have to maintain a level head. That is power and strength. Carlos, Mike’s son, talks about being in the middle of all the gunfire and chaos how it was terrifying at first but over time, he oddly became numb and mentally adjusted to it. It’s hard to comprehend such a feeling when it regards to war as a mere mental adjustment. It should be so much bigger than that and yet, it really doesn’t need to be. And I just don’t know how to feel about that.

One soldier in particular got shot in the head. He fell 400 feet off a ridgeline and endured several other major injuries but survived. And the first thing he wants when he gets out of the hospital 6 months later? He simply wants back in his platoon to be with the rest of his brothers. That my friends, is courage and integrity at its finest.

As an audience, we let movies tell us what the war is like. What we think it to be. And sometimes we allow media to tell us how to feel or how to think. But ‘The Hornet’s Nest’ is a real first hand experience on what is the longest war in history taking place in Afghanistan. We’re witnessing loss and fear up close and personal. These soldiers celebrate another day of life at the end of the day, each and every day.

Stay with it through the credits. We are treated with additional footage showing our soldiers bonding, laughing, and being reunited with their loved ones. I personally come from a military family and life. I felt like I knew and understood what our soldiers go through overseas. I know it is intense and dangerous and so many other things at once. But watching this documentary really opened my eyes. Witnessing these soldiers simply adjust to these extreme conditions and situations is emotionally conflicting. Watching them numb themselves so that they can just keep fighting and survive is heavy on the heart. It’s a good reminder to appreciate and respect our soldiers and allies, and their loving families and to appreciate the lives we are able to live because of them.

About [THE HORNET’S NEST]

Synopsis: Two journalists traverse the deadly deserts of Afghanistan alongside U.S. soldiers, showing us an in depth look at one of histories longest wars.

Don’t Worry, He Won’t Get Far on Foot | Movie Review