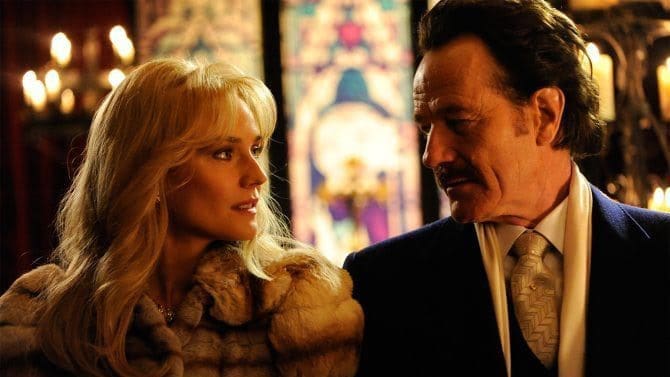 I’ll be the first to say that I’m a fairly harsh film critic. If I truly enjoy a film, you can rest assured it’s probably one of the best films made that year. It’s usually not difficult for me to find numerous flaws in almost every film I see. However, when I walked out of the theater following a screening of The Infiltrator, I had to think long and hard to find any kind of flaw in the film. I eventually found a few, but the flaws were minor to say the least.

The Infiltrator is a film based on the true story of undercover Miami cop, Robert Mazur (Bryan Cranston), and his attempt to topple the money laundering business of drug lord, Pablo Escobar. If you thought Bryan Cranston was convincing in Breaking Bad, or any of the films he’s done since the TV show came to an end, he topped all of them with his portrayal of Mazur. Never did I feel as though I was watching Bryan Cranston playing Mazur, it always felt as though I was simply watching the character and nothing more.

Cranston is joined by John Leguizamo, who plays Mazur’s undercover partner, Emir Abreu. Leguizamo’s career is a mixed bag with roles in all genre of film, but it’s when he’s featured in serious dramas that his acting prowess tends to shine, and that’s exactly the case with The Infiltrator. This is Leguizamo at his best, not just playing an undercover cop acting like a criminal, but struggling with his undercover job and earning the trust of his partner as well. It’s a fine line to make that kind of performance believable instead of feeling over the top, and Leguizamo walks it well.

Rounding out the main cast is Amy Ryan as Bonni Tischler, the officer in charge of the operation, Diane Kruger as Kathy Ertz, the undercover cop posing as Mazur’s fiancée, and Benjamin Bratt as one of the higher ups in the drug cartel, Roberto Alcaino. Ryan doesn’t have a lot to do in the film, but she’s good in the handful of scenes she’s in. Kruger plays off of Cranston very well as the two have to deal with their double life of being law enforcement and laundering money for a drug cartel at the same time. Bratt seems to always play the suave gentleman well, and that doesn’t change here.

What makes The Infiltrator so good (beyond the stellar acting) is the fact that it feels real. The audience feels the emotional rollercoaster happening on-screen. When an undercover agent is almost revealed, you feel the fear in the scene. There’s even a constant sense of tension throughout the film. You never know where the film is going or what’s going to happen next. Deaths come unexpectedly and there’s a constant state of uncertainty. As the audience, you’re in the dark just as much as the undercover agents, and it will keep you on the edge of your seat.

As with any deep undercover operation, there’s a concern of the agents getting too close with their friends and cohorts in the undercover world. You feel that in The Infiltrator. It’s one of the few films that makes you feel for the guys who are supposed to go to jail. You’ve connected with them throughout the movie, right alongside the undercover agents and you wouldn’t be upset if they end up getting away.

While the movie is fantastic, there are a few minor issues. There are some instances in which the film feels more dramatized than it needs to be. Some events play out a little too convenient for the camera and it may make you question if that’s actually how things went down in real life. Other than a few moments of odd plot convenience, it’s very difficult to find faults with The Infiltrator. It’s easily one of the best crime dramas of the last decade. Ghostbusters will likely be number one at the box office this weekend, but The Infiltrator is much more deserving of that honor.