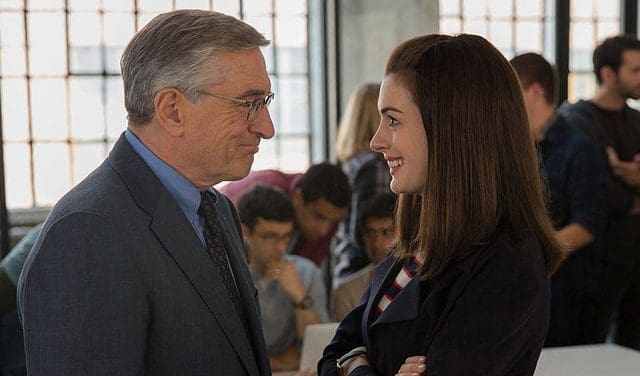 It’s not unreasonable to award Nancy Meyers the title of heir apparent to Nora Ephron.  While her films may not rival those of When Harry Met Sally, Sleepless in Seattle, or You’ve Got Mail, Meyers strikes a familiar chord that is felt in the subject matter she chooses to tackle.  There’s a feel-good atmosphere that surrounds her characters and puts you at ease no matter what the story’s obstacle happens to be.  Serious issues such as failed relationships, troubled families, and age discrimination are approached in a manner that is inviting and reassuring.  It’s no wonder that actors such as Alec Baldwin, Diane Keaton, Jack Nicholson, Kate Winslet, and many others are so eager to assist in bringing her works to life.

In The Intern, Robert De Niro plays Ben, a 70-year-old widower living in New York City who can’t quite come to terms with his sudden life of quiet solitude.  He stumbles across a program for senior internships at a local, online fashion company called About the Fit.  After providing a rather charming video about his desire to try something new and challenge himself in the new technological world, he finds himself in a workplace of twenty-somethings.  Each intern is assigned a person or team to work under and Ben is lucky enough to be assigned to the owner and boss Jules, played by Anne Hathaway.  Jules is incredibly ambitious, overly focused on her work, and reluctant to accept help from an inexperienced senior citizen.  Still she realizes this is a temporary situation and in time finds Ben knows more about running a business than she realized.  Ben also makes friends with several coworkers such as Jason (Adam Devine), Davis (Zack Pearlman), and Lewis (Jason Orley), who all contribute to the funny moments in this movie.  Another contributing element of fun is the company’s masseuse Fiona (Rene Russo).  Fiona could also be considered a senior citizen and finds an immediate affection towards Ben, leading to hilarious interactions.

The story centers around Jules trying to save her rapidly growing company and its mismanagement.  Her investors have lost confidence in her and she is forced to interview potential CEOs, even though it means relinquishing control of her business.  While all this is taking place, she has found difficulty maintaining a normal life with her daughter Paige and husband Matt.  Fortunately she has a very confident and reliable intern to see her through the biggest challenge of her life.

The movie moves along rather well and doesn’t rush the narrative.  We get to know Ben through his interactions and conversations with his coworkers.  He also has some terrific moments with Jules’ family.  As time goes on, we begin to see the benefits of having someone with decades of knowledge in management and organization mixing it up with college grads who are more experienced in computer programming and Facebook.  Ben provides tactical solutions to simple problems.

Even though the movie takes place in a work setting, the mood is almost always lighthearted.  Ben enjoys every new obstacle placed before him and loves being a useful person to someone again.  The only time the movie becomes serious is when Jules family is focused upon.  Between her work, her husband and her daughter, Jules can only do so much, but Ben doesn’t think she should compromise on anything and believes there is a happy medium to be found.  It’s Ben’s relaxed demeanor that keeps Jules from falling apart.

The Intern is a wonderful story of a man offering guidance to a brilliant, young woman trying to manage her success and have a healthy life.  It’s also a great story that showcases how capable the older generation can be and how they should be encouraged to improve their status in the workforce.  The chemistry between Anne Hathaway and Robert De Niro is without question and each scene makes their characters more engaging.  Robert De Niro doesn’t always bring his A game, but here it’s obvious he loves the part.  Adam Devine is fun as always, but I was even more entertained by Zack Pearlman’s antics on screen.

The young starlet who plays Hathaway’s daughter, JoJo Kushner, is too cute for words and a candidate to lead the toddler Mensa group.  Her dialogue in this movie is sweet and precocious and reminds me of a very small Macaulay Culkin.  I have to say that the ending left me a little unsatisfied and I found some of the situations in the movie weren’t realistic or believable.  Where the movie succeeds is its warm, inviting atmosphere and strong characters.  I never feel things are going to end up horribly wrong, but that is most definitely not the point of this movie or any of Meyers’ movies up until now.  You go into a Nancy Meyers movie to enjoy life and laugh at the absurdity within it.

Synopsis: 70-year-old widower Ben Whittaker has discovered that retirement isn’t all it’s cracked up to be. Seizing an opportunity to get back in the game, he becomes a senior intern at an online fashion site, founded and run by Jules Ostin.