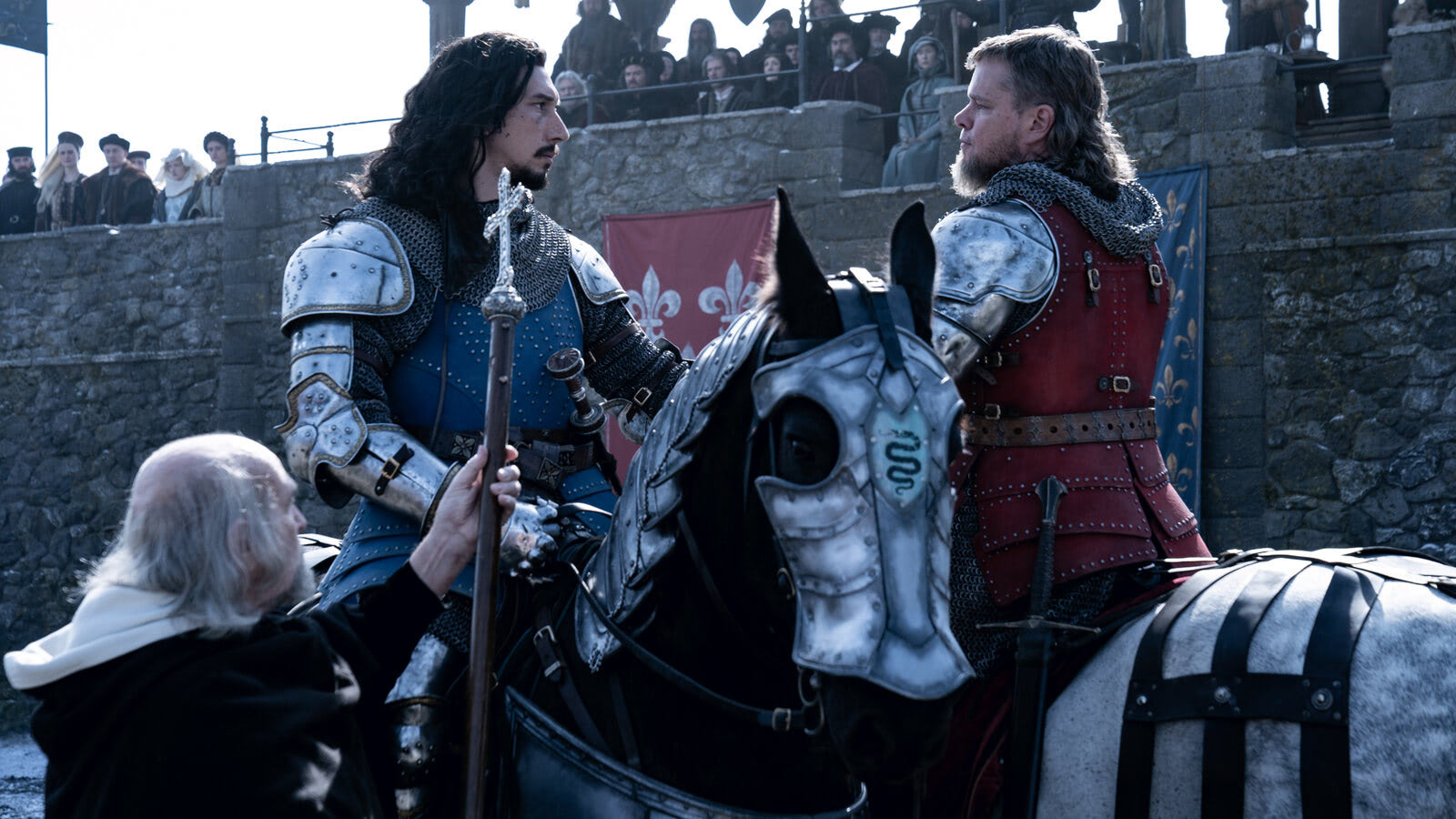 Ridley Scott was once one of the greatest directors in Hollywood. With hits such as Alien, Blade Runner, Thelma & Louise, and Gladiator, Scott was at the top of his directorial game. In recent years his track record hasn’t been as flawless, with the only real standout being The Martian back in 2015. His latest film is a timely tale, based on the real events of rape in medieval France, but can The Last Duel get Ridley Scott back on track? It’s a bit of a mixed bag.

The Last Duel focuses on the well-known events of the last judicial duel to take place in France. Sir Jean de Carrouges (Matt Damon) accused Jacques Le Gris (Adam Driver) of raping his wife, Marguerite de Carrouges (Jodi Comer). While no one knows the truth of the events that occurred, the legend has been debated across the world in the 600 years that have followed. Now Ridley Scott takes a stab at the fabled encounter.

Scott chose to tell the story of The Last Duel in three chapters, with each chapter representing one person’s point of view of the events leading up to the duel. The first chapter covers Sir Jean de Carrouges’ viewpoint, the second chapter is Le Gris, and the final chapter is from Marguerite de Carrouges’ perspective. On paper, this presentation works. However, in practice, it drags out the film to a bloated two-and-a-half-hour runtime.

The main issue with the three-chapter approach is that Le Gris and Marguerite tell a very similar story. The primary differences come in the additional details Marguerite adds, and the ferocity of the rape. This caused the last two chapters, each roughly 20-30 minutes in length, to feel almost identical. By the time chapter three concludes, you’ve seen the events three times, with relatively small differences between the three. It’s hard to imagine there wasn’t a better way to tell this story.

Despite the monotony of watching the same events unfold in triplicate, The Last Duel is exceptional in almost every other way. The set design and costumes feel genuine to the time period and help to immerse the audience in medieval France. Combat is visceral and barbaric, but the rapid camera cuts (which so many modern directors mistakenly favor) make it difficult to follow much of the action. This is odd given that Scott had a natural eye for filming the combat in Gladiator.

Matt Damon, Adam Driver, and Jodi Comer all prove why they’re considered established or rising stars. While each presents an outstanding performance for their respective characters, it’s Ben Affleck’s smug portrayal of nobleman Pierre d’Alençon that really takes the cake. You can tell Affleck is having fun with the role, and it shows, even in scenes of deadly seriousness.

Most western audiences will likely not be familiar with the legend of The Last Duel. However, those that are may have issues with Scott’s take on the material. While the truth is still unknown, what many consider to be the facts of the legend are changed or completely omitted in the film. In addition, Scott and the writing team chose to focus strictly on the three main characters (with a side of Pierre d’Alençon), instead of the fervor that engulfed the French royal family and nobles surrounding the events.

It’s clear to see why The Last Duel strictly follows the three main characters. Given the lengthy runtime, there wasn’t room to focus on anything else. With that in mind, if the three stories had been told in a different way instead of essentially repeating the same events three times over, there likely would’ve been plenty of time to delve into the other aspects of the legend. The end result of those potential changes will forever remain a mystery (much like the true events of the legend), but given the plodding pace of the current film, it likely would’ve been an improvement.

The Last Duel is a good movie. The problem is that you see that movie three times over the course of two and a half hours. Even exceptional performances from the main cast aren’t enough to prevent the tedious nature of viewing The Last Duel from bringing the film down as a whole. Perhaps someone on YouTube will create a superior cut of the film that doesn’t run for over two hours, but until then audiences will have to contend with what Ridley Scott has presented here.

About The Last Duel

Synopsis: King Charles VI declares that Knight Jean de Carrouges settle his dispute with his squire by challenging him to a duel.