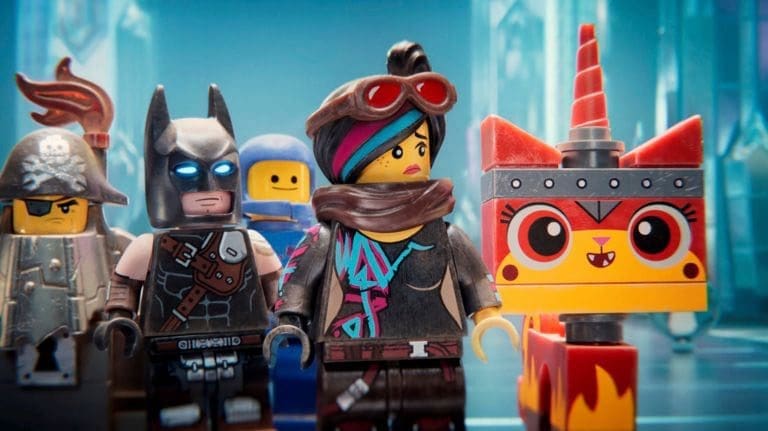 Legos have been around for decades, constantly fueling our imagination one piece at a time. Afternoons have been swallowed up by boys and girls creating fascinating structures, weapons, vehicles, robots, and worlds. Time well spent. I do make fun of the fact that most of our imagination is now predetermined by specifically designed Lego constructs. I think lately we’ve mostly entertained ourselves with visions of our favorite TV show or movie in Lego form, hence the popularity of the Lego Dimensions game.

I suppose you could associate it with the transition from kid to adult. We start out with chaotic expressions of thought that are deliberately random and somehow make sense when we play with them. As we age our perception of thought evolves. We strive to make sense of all the knowledge and chaos that reality has thrust upon us. Nostalgic displays of entertainment provide a euphoric release that is both satisfying to build and wonderful to look at. Imagination isn’t sidelined or diminished. It is now just more attuned to the user’s desires. In fact I believe when you mash all these worlds, that have been carefully composed with expert precision, together, you get the very methodical madness that Legos were meant for.

In The Lego Movie 2: The Second Part, directed by Mike Mitchell, five years have passed since Finn’s sister beamed her Lego creations into Bricksburg. All the worlds that Finn and his dad created have turned into a dystopian wasteland. Emmet (Chris Pratt) is completely oblivious to all the pain and suffering that has befallen everyone, while Lucy (Elizabeth Banks) keeps a watchful eye for danger, which could strike at any moment.

Batman (Will Arnett) and Unikitty (Alison Brie) also patrol the perimeter for invaders. When an attack from space occurs, an intergalactic warrior known as General Mayhem kidnaps all of Emmet’s friends, forcing him to travel through the cosmos to rescue them. He gets help from Rex Dangervest, a fearless seeker of adventure. Together they determine that Queen Watevra Wa’Nabi (Tiffany Haddish), a metamorphic shapeshifter who rules in the Sistar system, may have plans that could endanger the entire Lego universe. It’s up to Emmet, Lucy, and the rest of his friends to sort out this impending force of destruction before it’s too late.

I am going to presume that you did not and/or will not watch this film without having seen the first Lego Movie. We find out in the original that the entire story was actually being orchestrated by Finn, a young boy trying to connect with his father in the real world, played by Will Ferrell. There were some otherworldly forces at play from time to time, but otherwise it was mostly the projected visions of Finn’s imagination on a giant Lego display his father made. When you take that into account as you watch this sequel, you start to analyze it a little differently.

Originally it was the perceived idea that the Legos were being operated by children, but now you know it is actual children running the show. You briefly suspend that notion when the animation takes you for a ride. As the story progresses, you begin to ponder what might be happening in the real world and how do those events correlate to Emmet and company.

Sequels are no easy task in the best of circumstances, yet when the right story comes together a sequel can give a franchise life. Beyond money and a recognizable brand, it inspires an audience with possibilities, both in future sequels and relatable anecdotes. Obviously it still needs to be entertaining, but it is much more prone to repeat viewings when you discover ideas and subtle plot details that you hadn’t noticed before.

The Lego Movie 2 certainly qualifies as both an exciting follow-up and a clever story with nuance. It’s at least as good, if not better, than its predecessor and maybe I attribute that to the aging of the characters, or to be specific the human characters. None of us lives in a social bubble, hard as we try, and the concept of sibling conflict and shunning our youth is brilliantly executed across the Lego universe.

The editing and choreography of the film is well done. The pacing never lags and it keeps you hanging on from one scene to another using well-placed humor. The emotional beats in the film are never muted or compromised by the comedy. Instead it elegantly weaves the funny moments throughout and lets you become invested in Emmet’s journey as well as the siblings.

The music is perhaps one of the most memorable parts of the original film and they take that to heart in this one. It’s practically a musical now, but it’s only done for laughs. I guarantee something catchy will get stuck in your head.

I really enjoyed how this movie embraces a chaotic imagination. It is touched upon in the first movie, but there is so much child wonder on display here. You get to see a playful mind that is equal parts ambitious and optimistic. Our cynical, jaded minds are usually repulsed by sappy sentiment and naive positivity. We don’t often relate to it and that’s what makes this movie so special. It translates those feelings through the eyes of a child and presents it in a way that anyone can understand. It also doesn’t ignore the negative in your life and uses the song Everything Is Awesome in a brand new way and actually gives it meaning.

The worst thing I can say about the movie is that it doesn’t give enough characters their time to shine as the last movie did. It primarily focuses on Emmet and Lucy.

The Lego Movie 2: The Second Part is an outstanding sequel with lots of humor and heart. I admit getting teary eyed near the end. Chris Pratt and Elizabeth Banks are great. Tiffany Haddish as Queen Watevra Wa’Nabi is terrific as well and also interesting to watch when she changes form. The story is so layered and not convoluted. You can watch it multiple times and realize new things about it each time. There is humor that only adults will get, but it’s done in a way that will still make kids laugh too. The movie wasn’t directed by Phil Lord and Chris Miller, but, like Spider-man: Into the Spider-verse, it has their personality and sentimentality embedded into it. I recommend you watch this as soon as possible and stay through the credits. The Lonely Island boys offer up a hysterical new song.

About The Lego Movie 2: The Second Part

Synopsis:  It’s been five years since everything was awesome and the citizens are facing a huge new threat: Lego Duplo invaders from outer space, wrecking everything faster than they can rebuild.