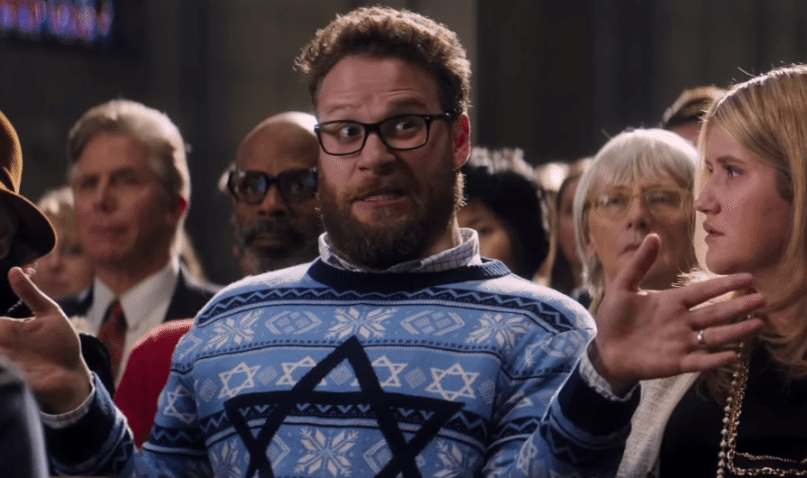 By now most audiences know what to expect from a Seth Rogen, R-rated comedy. He has collaborated with writer and producer Evan Goldberg a number of times. There are a few gems in the list, such as This is the End, Superbad, and even Knocked Up or Pineapple Express. However, there are also a few duds with The Interview topping that list. The Night Before is one of the better collaborations between Rogen and Goldberg, and although it’s not their best offering, a refreshing supporting cast and the holiday theme make it stand out from the pack.

In these movies, the story isn’t really as important as the antics that take the audience from start to finish. However, this story does make a bit of sense, so let’s get it out of the way. Joseph Gordon-Levitt plays Ethan, who lost his parents around Christmas back when he was in high school. His two best friends, Isaac (Rogen) and Chris (Anthony Mackie), create a Christmas tradition that helps bring holiday joy to such a sad time in Ethan’s life.

Fast-forward roughly 20 years and the tradition of frequenting the Rockefeller Center, eating Chinese food and singing karaoke must come to an end. Isaac is expecting his first child and Chris is a big time sports star, but Ethan isn’t really doing much with his life. At one point over the years the trio discovered a secret Christmas party that was essentially the Holy Grail of holiday events. There were never able to get into the event, but this year Ethan was finally able to score tickets to the super secret shindig. Of course, crazy holiday antics follow, and that’s the basic gist of The Night Before.

There’s a decent amount of heart in this one, but it’s more about the wild antics that occur while these three high school buddies are ending their annual tradition. As you might expect from a Seth Rogan comedy, drugs play a big part in the comedic value of The Night Before, so if you’re not down with drug-related humor, you can probably already take a pass. While this isn’t Pineapple Express with a Christmas theme, many of the jokes are related to the exaggerated side effects of taking various drugs.

The trio of main characters started their tradition back in the mid-90s, and there are a few throwbacks to that time. This makes the film appeal more to the 30-somethings out there than the current high school crowd. However, there’s still enough random drug-related humor that the high school and college kids will probably get a kick out of it, even if they’ve never touched a Nintendo 64.

While Rogen, Gordon-Levitt and Mackie all live up to expectations, it’s the supporting role of Mr. Green (Michael Shannon) who truly steals the show. You can probably tell by the character’s name that he plays a very specific role in the film (hint: drugs), but he takes on an almost father time-like role in this Christmas comedy. He doesn’t have a lot of screen time, but he is easily the best and most random aspect of the film. It’s a partial callback to Shannon’s role of Floyd Poteet in Bad Boys II and it’s definitely a nice change of pace for the generally dramatic actor.

The Night Before doesn’t really falter anywhere. It has good pacing, a decent amount of comedy that should appeal to a wide audience (although it is focused on drugs), a bit of nostalgia, and even a few surprises we won’t spoil here. It’s not Rogen’s best film but it ranks high among his numerous comedic adventures, and it’s a nice departure from the recent roles that Mackie and Gordon-Levitt have played. Mixing up the cast has definitely added some much needed inspiration to the typical Rogen/Goldberg R-rated comedy. This isn’t a heart-warming family comedy, but if you and the guys want a night out at the movies, this is a solid choice.

About The Night Before

Synopsis: On Christmas eve, three lifelong friends, two of whom are Jewish, spend the night in New York City looking for the Holy Grail of Christmas parties.

[…] suffered an identity crisis between heartwarming comedy and melodramatic tragedy.  We also got The Night Before, probably the best holiday film of that year and a contender for an annual viewing tradition. […]

[…] suffered an identity crisis between heartwarming comedy and melodramatic tragedy.  We also got The Night Before, probably the best holiday film of that year and a contender for an annual viewing tradition. […]