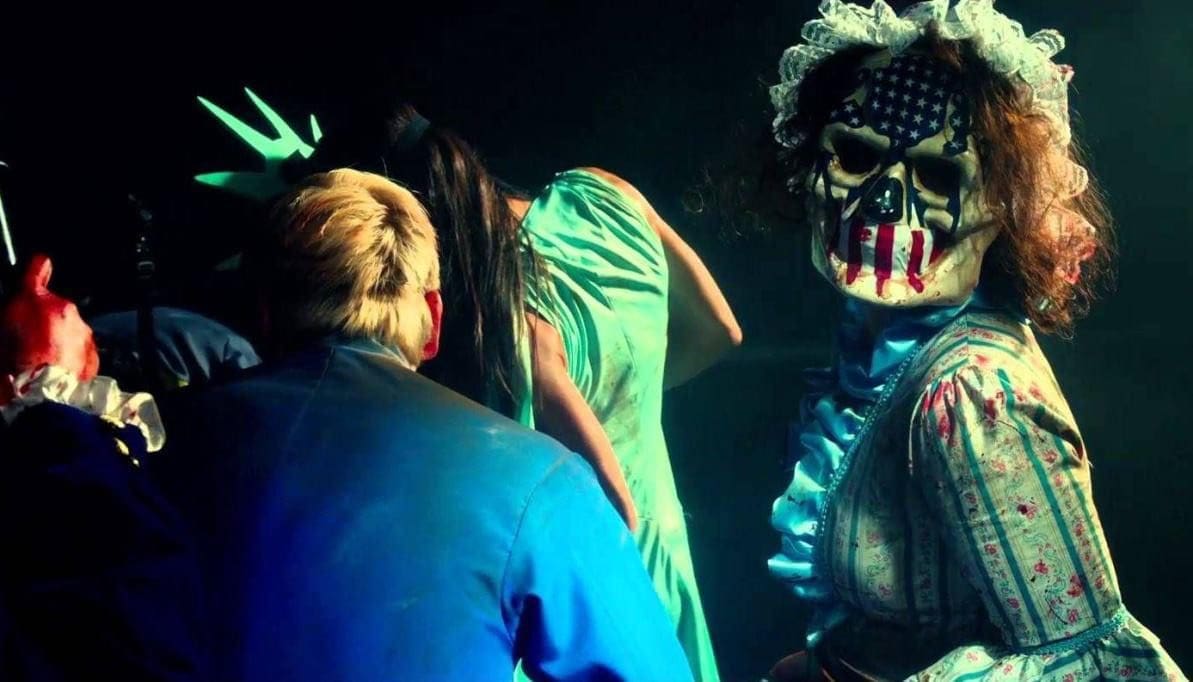 It’s fun to delve into alternate realities.  Realities that defy comprehension for everyone watching, but within that world they subscribe to new forms of advanced or retro technology, totalitarian or Utopian governments, and sometimes even strange, intelligent creatures that are just in the background and society has learned to co-exist with them.  It’s a unique way of telling familiar stories about civilization and its politics and prejudices, but with an abstract viewpoint.  At least it can be interesting if done right such as the original Star Trek series or Planet of the Apes.  The Purge is one such film that proposed a radical idea of sanctioned murder for one night every year and how it brought out the worst and the best in people.  The sequel showed that even with a strong belief in honor and morality, any tragic incident or desperate moment can drive people to do unspeakable acts without any regard for life or loss of their own humanity.  It’s heavy subject matters such as these that pepper this now trilogy of horror and action, all three of which have been written and directed by James DeMonaco.  The third and perhaps final installment does what most part 3 films have difficulty doing and that is successfully bring its story to an entertaining and satisfying conclusion.

In The Purge: Election Year, it has been two years since the events of The Purge: Anarchy and Leo Barnes (Frank Grillo), now living in Washington D.C., is under the employment of Senator Charlie Roan (Elizabeth Mitchell) as her head of security.  Senator Roan is running for President and her childhood experience with the Purge has given her one sole purpose.  With the upcoming election only months away and Senator Roan’s pledge to end the annual Purge for good, her life is now in the cross hairs of the New Founding Fathers of America.  Leo will do everything in his power to ensure the senator’s safety, but, with a government hell-bent on Roan’s death, he’ll have to contend with a slew of unknown enemies.  On top of that, the country is celebrating its 25th anniversary of purging, which means psychotic patriots and loyalists of the New Founding Fathers patiently waiting to get their blood lust started.  Fortunately Leo has the help of both an underground rebellion and a small group of new friends, led by a shop owner named Joe Dixon (Mykelti Williamson).  Joe’s friends Marcos(Joseph Julian Soria) and Laney (Betty Gabriel) have a history of their own that you learn about throughout the movie and it explains why they are committed to this cause.  Senator Roan may have a strong chance of winning the presidential election, but first she has to survive the night.

Frank Grillo’s character Leo has a much bigger and more noble mission on Purge night this time around.  As always he is prepared for all manner of contingency and counts on his experience to see himself through the terrors that await him and his group, but when the situation becomes next to impossible he now has the support of an armed militia with the resources to survive almost anything.  Leo Barnes is in many ways very similar to Grillo’s Rumlow character in Captain America: Winter Soldier, except this time he’s using his exceptional skills of fighting to protect the defenseless and Hydra in this movie is a bunch of white, rich elitists who only see disgusting poor minorities getting in the way of their endless prosperity and religious purity.

The action in this film, much like it’s predecessor, is intense and visceral, but of course the stakes have been raised.  You’ve never been more invested in the main characters’ survival and that has as much to do with the actors’ performances as it does with the story.  One of the biggest highlights of this film being Mykelti Williamson as Joe Dixon, who you may recognize as Bubba from Forrest Gump.  His cynical, sarcastic personality is so full of humor and energy that you are glued to his scenes and want to see where his journey takes him.  While the humor can sometimes seem out of place, it’s really necessary in order to cut through the hyper violent, unnerving atmosphere of despair that’s plagued all three of these films.  I thought the brief amount of humorous beats in The Purge: Anarchy reminded me of The Warriors, but in this movie that comparison is even more recognizable.   It’s a circus of mayhem and our heroes of misfortune have no choice but to travel through it.  Gangs of killers in strange masks and attire taking over their slice of the city and somehow our protagonists can still crack jokes.  After all it’s been 25 years since this all started and insanity has been allowed to flourish under the guise of patriotism and religious doctrine; so you can expect them to employ every self-defense mechanism in the book to avoid going crazy themselves.

One of the interesting aspects of this new entry is finally getting to see the New Founding Fathers of America.  I was always curious how this whole Purge concept got started and how it could have possibly become law.  You don’t get any of those answers, but what you do get to see are the people who orchestrated the whole thing.  They have practiced and honed their convincing arguments for maintaining the Purge’s existence, but whatever the reason may be cannot erase the fact that they have no minorities in their ranks.  They are all white and angry for being forced to shelter, feed, and care for those less fortunate than they are.  Legalizing murder for one day a year seems like a strange solution, but what can you expect from such heartless, religious bigots.

The violence in this movie is over-the-top on several occasions and the camera does not pull away from the gory moments, but those scenes are minimal and the action is mostly focused on a series of street battles that Leo, Senator Roan, Joe, Marcos, and Laney have to overcome.  There are background characters that show up from time to time to remind us of the nightmare world they are inhabiting and how they like to display their corpses.  I see this movie as leaning more towards action than horror, but when that action begins to wane you’ll find horror appear in the form of bloodthirsty lunatics and monologues by sociopaths.

Where the movie struggles is in its uneven pacing and not really driving up the tension as well as it should have.  There are several scenes where the energy begins to build, or tries to, but it is immediately extinguished by an abrupt resolution.  Some of the ancillary villains seem too one-dimensional and could have made better adversaries for our protagonists if given more time to develop their characters.  I also thought having the government after you would have entailed a massive military response and eventual cover-up, but instead we get a band of heavily armed, white supremacists who somehow struggle to find a few helpless souls in Washington D.C.  Maybe Leo Barnes saw the 8th season of 24.

The Purge: Election Year is an exciting and fun conclusion to this trilogy and I’ll even say the best one by far.  Frank Grillo’s introduction in the second film was a great choice and gave the franchise a new direction.  It also gave the audience someone to attach themselves to.  There’s more developed characters in this film, such as Joe and Senator Roan, and the dialogue and chemistry between almost everybody is improved as well.  Mykelti Williamson brings so much life to his performance, with his one-liners and matter-of-fact attitude, that it makes the overall film a much more entertaining adventure.  I would have preferred a flashback scene to the very first year the Purge began, but otherwise they do round out the other side of this topsy-turvy world and what their part is in all this.  It’s not a pure horror film, but it is full of maniacs and enough terror to qualify.  The action is orchestrated well for the most part, but again the timing is not always there.  I recommend this for fans of Frank Grillo, fans of alternate realities, and anyone who enjoys the dark humor of a good 80’s action movie.   I am eagerly anticipating James DeMonaco’s next project.

About The Purge: Election Year

Synopsis: Two years after choosing not to kill the man who killed his son, former police sergeant Barnes has become head of security for Senator Charlene Roan, the front runner in the next Presidential election due to her vow to eliminate the Purge.