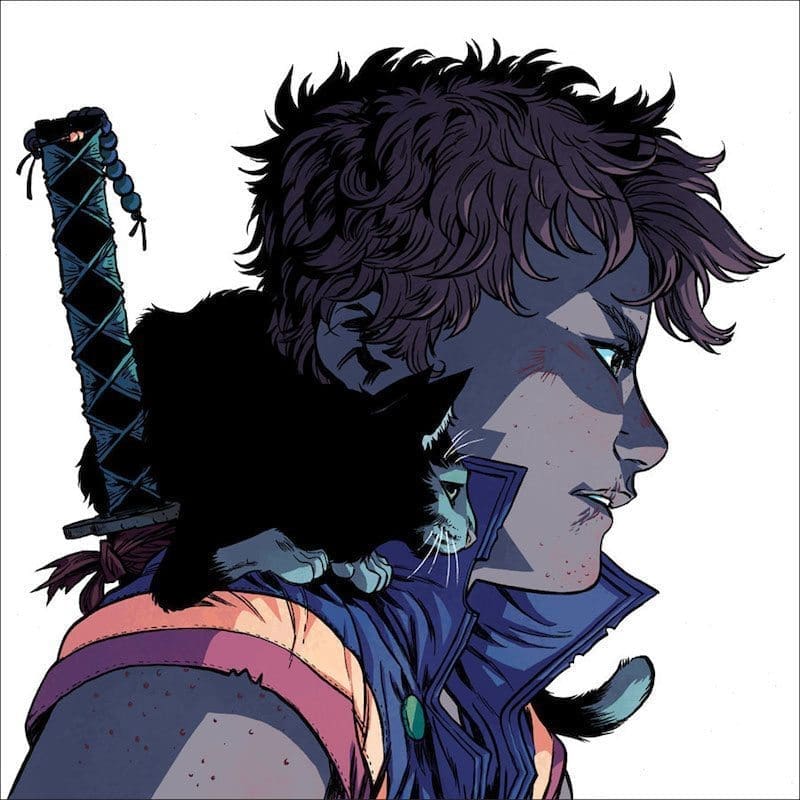 That The True Lives of the Fabulous Killjoys was conceived as a successor to the high-concept My Chemical Romance album of the same name is an ancillary fact given how well the actual product stands on its own. Even knowing all the ins and outs of the Killjoys album as I do did not prepare me for the breadth of influential ideas that co-writers Gerard Way (lead singer of the now defunct My Chemical Romance) and Shaun Simon compact into this six-issue miniseries. Liking or even knowing of the band is not a barrier to entry to Killjoys, though adoration for dystopian science fiction-influenced stories is. Way and Simon often cull from sources like Blade Runner, Mad Max, and the collective works of author Phillip K. Dick to provide a multifaceted narrative that might not be as near-perfect as the works it draws from but is just as wildly inspired.

Attempting to summarize the encompassing world that Killjoys operates in is about as simple as explaining the entire Star Wars universe to someone that has never seen a single one of those films. I would strongly recommend checking out music videos for the My Chemical Romance songs “Na Na Na” and “Sing” to get an idea of what transpired prior to this series, but the basic gist of it revolves around two warring factions:  the über-conglomerate of Better Living Industries and the masked rebels known as the Killjoys. As part of their final heroic act before being obliterated by BLI, the Killjoys rescued a young girl (simply called The Girl) and brought her to safety. Now, as the series opens, The Girl awakens to find that she must fulfill her destiny as the savior of Battery City from under the iron-grip and watchful eyes of BLI. Getting a nosebleed yet?

Good, because there’s so much more but it’s best just to go with it because that’s exactly what Way and Simon expect of their audience. There’s a lot to infer and decipher as Killjoys unravels its narrative arcs, of which there are multiple ones revolving around several likeable characters, and some not so likeable. As the protagonist, The Girl is easily the most relatable and accessible, providing that all-important outsiders look into an unknown world that stories of this ilk desperately require. Red and Blue, two porno droids looking for life beyond the walls of Battery City, pose a compelling Phillip K. Dick-inspired question about what it means to be human. Korse, an exterminator for the BLI, offers a look into the controlling world of the villains of this tale, and his journey allows the writers to blur those lines between villainy and heroism. It’s only the Ultra V’s—a troop of Killjoy wannabes– that prove to be underwhelming in the supporting cast as their crass actions and flippant attitude hold little value in a tale about characters battling with real moral dilemmas.

Way’s natural lyricist compulsion takes form throughout the series, providing dialogue that is alien at first but familiar the more it is used, so much so that a phrase like, “Talk dirty to those guns and make yourselves useful” might be something I actually use, if I ever find myself poised for a gunfight in a Mad Max-esque dystopian landscape that is. Using characters like DJ’s Cherri Cola and Dr. Death Defying not only ease the reader into the kind of vernacular that Way frequents but pads out the world at large, to an extent. There are still dozens of aspects of Killjoys that go unexplained, the most detrimental of which is the shadowy organization of BLI. Despite a prevailing threat throughout Killjoys, BLI is never defined beyond their goons, which includes horror mask-wearing Draculoids, the aforementioned Korse, and a nameless female leader, whose most defining trait is that she often dons a leather dominatrix outfit and literally whips her employees into shape. In a world of rich, imaginative complexity, to abbreviate the organization simply as BL/Ind. is telling as to how much thought really went into the supposed “big threat” of Killjoys.

When it comes to the art of Killjoys, Becky Cloonan absolutely envelops the reader in this post-apocalyptic world. Her depictions of Battery City as a futuristic slum has more than its share of nods to the world of Blade Runner–complete with an intact homage in the clear plastic raincoat that Blue wears on the streets—while the headquarters of BLI is rendered in straight lines and a lot of perfect right angles. This also provides a stark contrast to the world in which The Girl and her band of misfits inhabit, which Cloonan draws with a lot of wide-open space befitting of a forgotten wasteland. It’s the perfect accompaniment to the Killjoys imaginative and expansive science fiction-inspired universe.