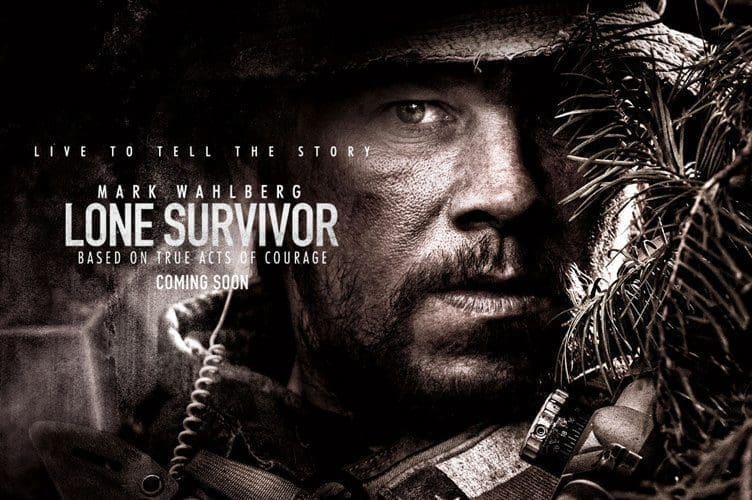 Director Peter Berg has had a career full of several highs and lows. Although he started out directing an episode of Chicago Hope, the project that put him on the map was 2004’s Friday Night Lights. He followed it up with the somewhat praised film entitled The Kingdom and then the critically panned Hancock. Berg took a couple of years off from film and then came back last year with the giant financial stain that was the film Battleship. Getting away from that giant CGI mess, Berg decided to direct the new film Lone Survivor which is based on the failed SEAL Team 10 mission entitled “Operation Red Wings”.

Marcus Luttrell (Mark Wahlberg), Michael Murphy (Taylor Kitsch), Danny Dietz (Emile Hirsch), and Matt Axelson (Ben Foster) are four Navy SEAL team members who get sent on a mission to either capture or kill a high ranking Taliban leader. While on their mission several problems arise: they lose communication with their commanding officer, they encounter some goat farmers which they initially detain and then decide to let go, and they find out that an entire Taliban army surrounds their target. When all of these unfortunate events combine, the four men find themselves searching for safety while trying to fight off the army that has them both outnumbered and outgunned.

The film perfectly encapsulates what lengths soldiers must go through in order to try and stay alive when the odds are completely stacked against them. The entire cast gives a first-rate performance portraying the emotions of both fear and strength when the firefight erupts between them and the Taliban. As a viewer, the film makes you feel completely helpless as you watch these four men get riddled with bullets and other unfortunate bumps and bruises. The near constant battle is shot and cut at a very quick pace which helps to intensify the kneejerk, heart pounding action that you are witnessing. There are also sporadic times of calm and quiet peppered throughout that allow you to catch your breath while also seeing the true friendship that all four men share. While the film does a great job of making you feel like you are a part of the action, it unfortunately feels a bit heavy handed at the beginning and end in direct comparisons to a Navy recruitment commercial. The film starts out with a somewhat long series of shots involving video of real Navy SEAL training. The end is an incredibly lengthy mixture of both photos and video of all the men who died during this particular mission. Both of these are completely justified in being in the film but due to their significant lengths, they make you feel that Berg and his editor are trying to rub the men’s deaths in your face in a very uncomfortable way. Another qualm I had with the film is the use of CGI in one particular scene. I assume they had to do it because they didn’t get the shot that they wanted while on set, but what they end up with is a scene that completely loses its entire dramatic push due to the use of shoddy CGI.

As a whole, the film serves as a testament to the great hardships soldiers must endure while serving their country. However when those hardships are shown to you in a very patronizing way, it definitely lessens their overall impact. Nevertheless, even with the criticisms, Lone Survivor is an excellently crafted war film that will keep you on the edge of your seat with every bullet-whizzing-by moment.

Synopsis: The true story of four Navy SEALS who are sent on a mission to either capture or kill a high ranking Taliban leader.