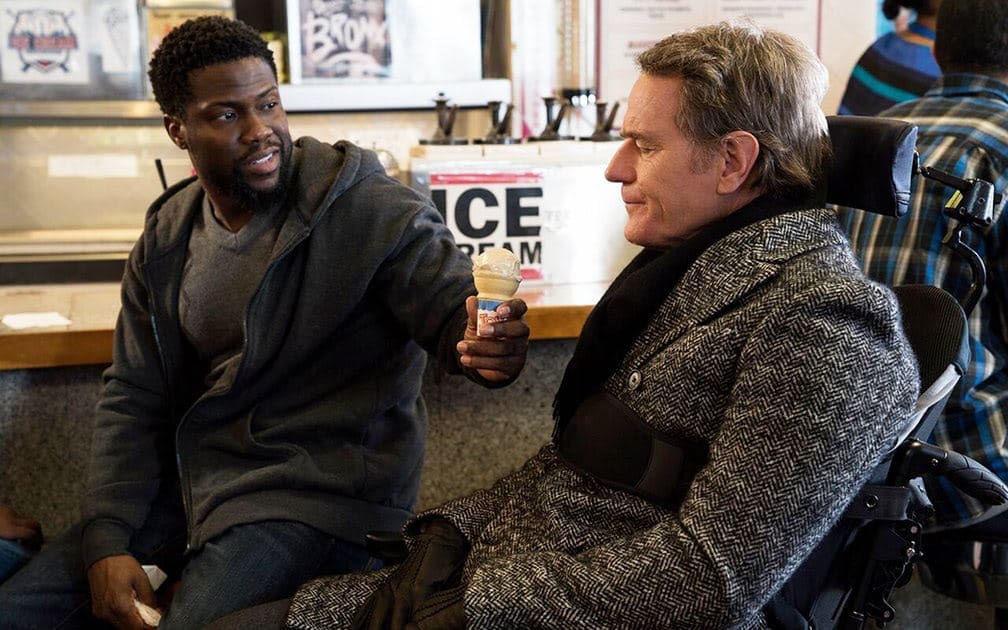 Kevin Hart isn’t known for his acting skills in dramas. He’s a comedian through and through, and while many people enjoy his personal brand of comedy, there are plenty of people who steer clear of any film starring Hart. The Upside, the latest film release starring Kevin Hart, is not what you would expect from a traditional Kevin Hart film. While Hart’s humor is on display, it’s not the focal point of this drama, and his co-star, Bryan Cranston, balancing Hart’s comedy, with his own solid acting to make this a worthwhile feature. Let’s take a closer look in our movie review of The Upside.

The Upside is a remake of the 2012 French drama, The Intouchables (Les Intouchables). Both films are based on a true story, but the French version focuses more on Philippe (François Cluzet) instead of Driss (Omar Sy). In the story, a very wealthy man becomes a quadriplegic and requires someone to care for him 24 hours a day. Philippe in the French version is replaced by Philip Lacasse (Bryan Cranston), while his caregiver becomes Dell Scott (Kevin Hart).

Both films features a fair amount of comedy, but The Upside makes use of Hart’s star power to presumably make the film more marketable to US audiences. While you’d be hard-pressed to find people who believe The Upside is superior to The Intouchables, director Neil Burger and his creative team do a very good job Americanizing the film. This is a Kevin Hart comedy, but it’s not as heavy-handed and Hart fan and general audiences are accustomed to. This is Kevin Hart light, and it works.

Dell Scott is an ex-convict who needs to find work, but believes most of the jobs offered to him are menial and below him. When he stumbles into the upscale home of Philip Lacasse, the ailing aristocrat sees it as an opportunity to find someone who will won’t care for him properly and will just let him die. Lacasse’s business associate, Yvonne Pendleton (Nicole Kidman), cares deeply for him, and tries to cease Scott’s employment on multiple occasions. It’s a triangle of love and caring that will resonate with US audiences.

If you’re not a fan of Kevin Hart, don’t worry as this is more of a Bryan Cranston and Nicole Kidman film than it is a Hart film. Hart is still prominent in the film, as it focuses more on his Dell Scott character than the French version, but this is primarily a drama. If you were a fan of The Intouchables, there’s a good chance you won’t care for the subtle changes. However, if you go into The Upside without prior knowledge of the French film that came before it, this is an enjoyable and heartfelt film that offers far more than you might expect on the surface.

Cranston plays Lacasse as someone who you won’t like at first, but as the character grows, you learn to love the ailing man. Kidman’s portrayal of Pendleton is stiff and earnest. She opens up a bit as the film progresses, but she is the stern compass that Lacasse and Scott must abide by. Hart adds the necessary brevity that is virtually required with a drama like this. Put all of the pieces together, and while this isn’t the perfect film, there’s a lot to like here.

The Upside doesn’t explain some of Lacasse’s behavior as well as The Intouchables, but it does everything else right. It’s a fun drama that has a lot of heart and can be enjoyed by the whole family. It’s not a traditional Kevin Hart comedy, and it isn’t a hard-nosed drama. It’s a wonderful mix of the two that creates a very American, but very well done tribute to the original film and the true story it’s based on.

Synopsis:  A comedic look at the relationship between a wealthy man with quadriplegia and an unemployed man with a criminal record who’s hired to help him.