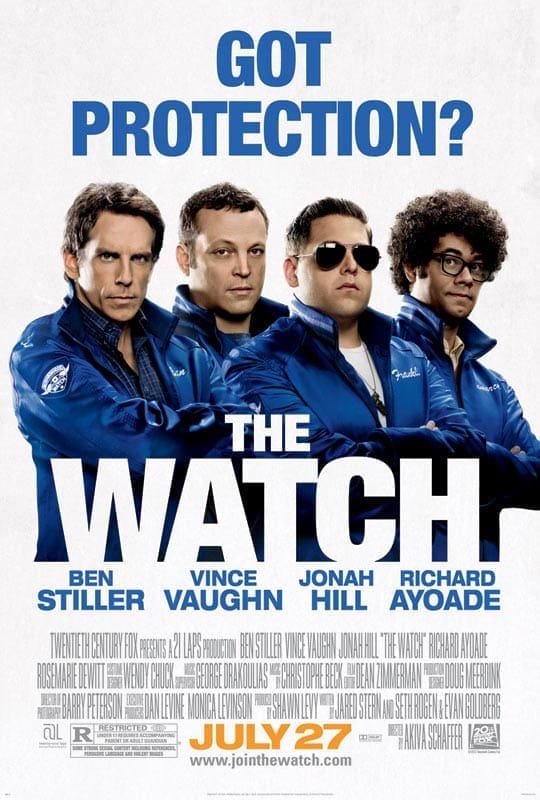 So how does one review a comedy? Unless you’re reviewing a James L. Brooks movie there’s only one question to ask, is it funny? But that doesn’t make for a really good review and since no theatres around here are playing Killer Joe, I’ll try my best to give you what you want.

The premise of this movie, as you probably know, is some aliens decide to invade Earth starting with a sleepy Iowa or Idaho or some other Midwestern town. Why? Who cares, I came to laugh. The Watch comes from the same guys who brought us Superbad, Pineapple Express, 50/50, and The Green Hornet, which is a pretty good track record, so I thought this would be a home run. Unfortunately, it was more like a bunt. A bunt with a double play. This movie would have worked better as an actual alien invasion movie with some comedy sprinkled in, instead of a comedy with an alien invasion plot crammed into it.  To give you a frame of reference Signs was funnier.

I think we should all just agree to not give any more roles to Vince Vaughn. He was more annoying in this than funny, almost to the point of being distracting. Ben Stiller was Ben Stiller, and Jonah Hill was trying to channel some weird Travis Bickle type persona or something, I don’t know. The one shining light was newcomer Richard Ayoade. While the other players were jumping around trying to get your attention by doing “funny” things, he was more subtle and subdued. This looks like his first American movie, but he’s done other stuff in the UK, so I’m going check out his other work. Billy Crudup also makes a strange refreshing cameo. Other than those two guys the rest of The Watch falls asleep on the job. I know, I’m sorry. I tried to do my best, but I couldn’t resist.

Unless you’re really bored I would recommend skipping this one. If you absolutely must see this one, wait until it’s available at Redbox and even then see if a friend has already rented it. So to answer the question posed above, was it funny? I can safely say No.

Here is the trailer:

“Much Ado About Nothing” Movie Review