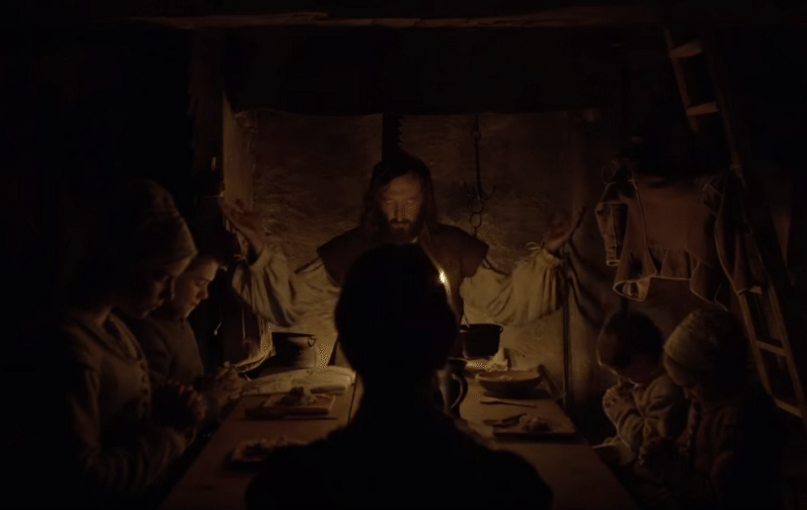 The film industry has capitalized off urban legends, myths, and ghost stories for decades, particularly those that are set in America.  If there is even the slightest hint of plausibility, it adds to the suspense and thrill for the audience.  The Blair Witch Project took that premise to a whole new level when it convinced the country three student filmmakers went missing in Burkittsville, Maryland.  Even Orson Welles knew how to spin a yarn so compelling that it sent radio listeners into a panic.  Testimonials provide us with evidence of eyewitness accounts.  They can be complicated by prejudice, fear, religion, or simply misunderstandings.  We are always taught to have faith in the divine, but in some cases we are urged to believe in darker forces.  So how did 17th century New England perceive these same situations?

In The Witch, directed by Robert Eggers, a devout family voluntarily leaves a village after refusing to abide by their laws or engage the community in a tolerable manner, due primarily to their strict, religious practices.  William (Ralph Ineson), the father, believes they can lead a private, more faithful life in the wilderness.  The eldest daughter Thomasin (Anya Taylor-Joy) tends to the chores along with her mother Katherine (Kate Dickie).  Thomasin also looks after the younger twins, Mercy and Jonas.  Caleb, the older brother, also helps his father and learns from him.  After some time passes, their new home near the woods falls prey to several events of bad luck.  Bad luck with their livestock, their children, and perhaps their souls.

It’s important to emphasize the subtlety in how the story unfolds with this movie.  There is no great action or outrageous characters to entice your interest.  It’s a family wrought by unwarranted despair.  Despair that could possibly be attributed to a witch, but that’s only half the story here.  There’s also a family that fills its life with so much guilt, the guilt of being sinners, that they must live a humble, faithful life of solitude.  Isolation can be a form of meditation, but if you close your mind off from the world you risk inviting bigger problems than the ones you ran away from.  The oldest daughter Thomasin understands this more than the rest of her family and struggles to communicate her frustrations with her parents.  She needs answers and, much like any teenager, will look for them anywhere if she can’t find them at home.

The story of The Witch is based on real-life accounts transcribed from actual settlers in the 17 century.  Witches or witchcraft, with regard to storytelling, dates back as far as the Bible.  The superstitions and fears associated with this supposed dark art are derived from the cultures who give it life.  If it cannot be explained in some way that pleases that society, it will be labeled and destroyed to protect the populace.  Any strange person in those times could be accused of practicing witchcraft without any logical explanation.  The dialogue and speech used in this film are also derived from these published accounts and can be difficult to follow at first.  Old English speech has an almost Shakespearean element to it.  You really need to focus on what is being said to not only understand the characters statements, but also their state of mind.

The Witch is an independent film that won an award for best director at the Sundance Film Festival in 2014.  The direction of the scenes is what really drives the mood throughout the movie.  I really enjoyed the way lighting and music are combined to create this eerie, unsettling ambience.  The music is in fact the most unsettling part of the film, until the story begins to rip the family apart.  Then the music sort of fades away and allows the imagery to feed your imagination, unfettered by any cinematic distraction.  Of course the characters themselves are also engaging.  The father in particular has a voice that would rival any bass instrument.  When he speaks you are forced to listen.

I enjoyed The Witch and its brilliantly crafted atmosphere.  The depiction of a 17th Century family in the New England wilderness is convincing to the point that I believe these characters and their eccentricities.  The younger twins are the most disturbing kids I’ve seen on film in a while.  The story is shorter and less robust than I would have hoped.  At 90 minutes it does give you a nice, small tale of American pre-colonial life.  I wished the witchcraft element of the story was explored more, but that’s buried in the subtlety.  You aren’t supposed to think a witch could cause all this trouble, even though several scenes say otherwise, but at the same time you can still make witchcraft a scapegoat for anyone’s behavior without ever proving it.  Whether a witch exists, it’s important to have faith in your family and not succumb to superstitions.  Unless your loved one happens to actually be a witch.  In which case I would just stay on their good side.

Synopsis: A family in 1630s New England is torn apart by the forces of witchcraft, black magic and possession.