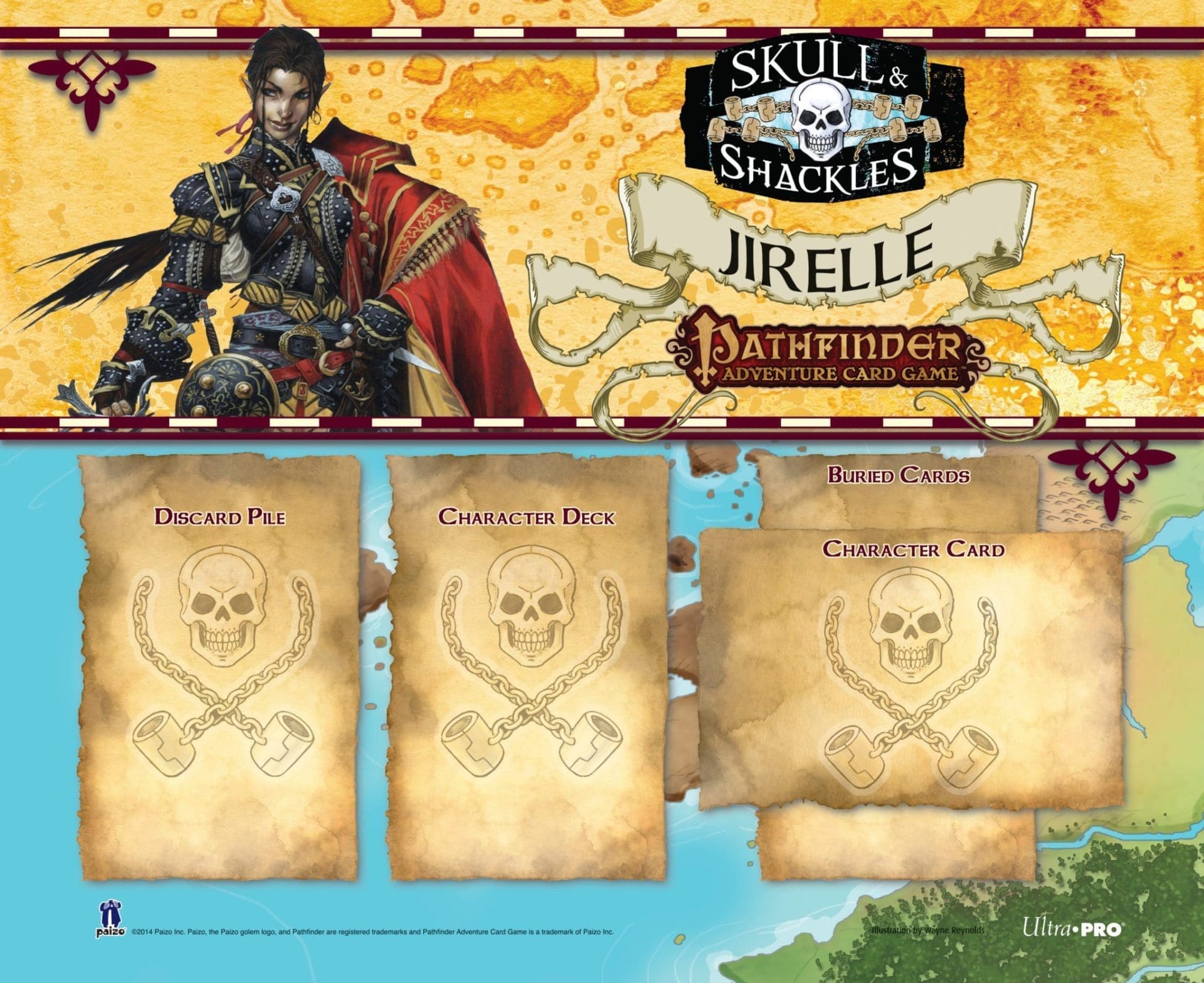 Topping Many 2013 Game of the Year Lists, the Wildly Popular Pathfinder Adventure Card Game to Get Custom Accessories Line

After the success of the character mats released at last summer’s Gen Con Indy game convention, players can look forward to a full Ultra PRO product line to enhance player experience, and to organize and protect the PACG cards.

“A great cake is enhanced by great icing, and that’s what our products do. The art and the layout of our accessories are designed to help immerse players in the Pathfinder Adventure Card Game storyline. The playmats serve to minimize unruly card piles and provide rich visual cues of the playable heroes and their adventure paths, while Deck Protector sleeves and other storage products help extend the life of the game for long-lasting gameplay.  All these items come together to help players to better enjoy the rich content created by Paizo in this exciting new game”, explains Frank Whittaker, Ultra PRO Director of Marketing.

–       Adventure Case: A sturdy storage case capable of holding over 1,200 sleeved cards, including an entire PACG Base Set plus all expansion decks for that set plus dividers (MSRP tbd)

The Pathfinder Adventure Card Game (PACG) translates the world’s best-selling Pathfinder Roleplaying Game (RPG) into an entirely new breed of card game, where players adventure, battle monsters and villains, and acquire new feats, items, weapons, and allies – all without a Game Master. The first game, PACG: Rise of the Runelords, made its debut at Gen Con Indy 2013, where it sold out in the first four hours. The follow up, Pathfinder Adventure Card Game: Skull & Shackles, based on the pirate-themed Pathfinder RPG Adventure Path, is scheduled for release at Gen Con Indy 2014.

The Pathfinder Roleplaying Game is the world’s best-selling tabletop RPG, in which players take on the role of brave adventurers fighting to survive in a world beset by magic and evil. The Pathfinder RPG is currently translated into multiple languages, and the vibrant Pathfinder universe has been licensed for comic book series, graphic novels, miniatures, plush toys, apparel, and is being developed into a massively multiplayer online roleplaying game.

Paizo Inc. is publisher of the world’s best-selling Pathfinder Roleplaying Game, the wildly popular Pathfinder Adventure Card Game, as well as Pathfinder Tales novels, board games, and gaming accessories. Paizo.comis the leading online hobby retail store, offering tens of thousands of products from a variety of publishers to customers all over the world. In the eleven years since its founding, Paizo Publishing has received more than 50 major awards and has grown to become one of the most influential companies in the hobby games industry.

Ultra PRO International LLC (“Ultra PRO”) is a California-based leading manufacturer and supplier of trading card gaming and tabletop gaming accessories, photo and scrapbooking albums and storage pages and Ultra Sleeves™, a line of disposable, protective sleeves for computer tablets.  Ultra PRO has been designing and manufacturing top quality products since 1952, and its brand is recognized worldwide for its high quality standards and design innovations.

Next Xbox Being Unveiled in May