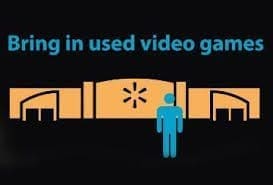 BENTONVILLE, Ark. – March 18, 2014 – Walmart is giving the more than 110 million gamers across the U.S. a new way to unlock value in their current purchases and save even more when it comes to one of the fastest-growing forms of entertainment.

Starting Wednesday, March 26, customers will be able to trade in their video games and apply the value immediately towards the purchase of anything sold at Walmart and Sam’s Club, both in stores and online. The traded-in games will then be sent to be refurbished and made available for purchase in like-new condition at a great low price.

“Gaming continues to be an important business for us and we’re actively taking aim at the $2 billion pre-owned video game opportunity,” said Duncan Mac Naughton, chief merchandising and marketing officer for Walmart U.S. “When we disrupt markets and compete, our customer wins. They’ll save money on video games and have the flexibility to spend it however they want.”

Available at more than 3,100 Walmart stores nationwide, the new trade-in service will accept thousands of games for popular consoles like the Sony PlayStation3 and Microsoft Xbox 360. Trade-in value will vary.

Later this year, Walmart customers will also be able to purchase pre-owned video games in stores and on Walmart.com. The video games will be labeled “Certified Pre-Owned” which means the product is fully refurbished and in like-new condition.

“While new releases will remain the focus of our gaming business, we’re glad to give our customers the option to buy pre-owned games,” added Mac Naughton.

Walmart’s in-store video game trade-in program builds on its existing trade-in offerings. In-store, customers can trade in tablets and smartphones and apply the trade-in value towards the purchase of a new device. Online at www.walmart.com/gadgetstogiftcards, customers can receive credit for a larger range of products such as MP3 players, cameras and laptops, in addition to smartphones, tablets and video games.