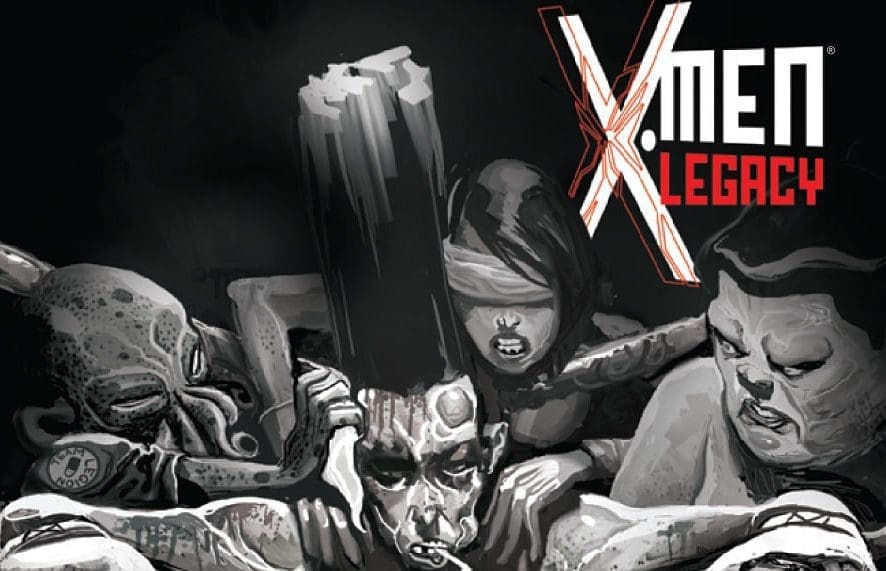 X-Men Legacy #17 promises a one-on-one, no superpowers fight between David Haller and Scott Summers and delivers at least as long as it can. Listen, in theory a fair fight between two overpowered mutants is fine for a few pages, half the issue at the most if there’s a story worth telling like there is here. Writer Simon Spurrier shows great restraint to hold back as long as he does when the two should just be blasting the heck out of one another from the start. He delivers the tête-à-tête as promised, but it’s when David and Scott are allowed to be Legion and Cyclops that the plot becomes the kind of off-kiltered madness I appreciate the series for.

There is a lot of narration from Legion in this issue, and although I can appreciate his cheeky language as much as the next reader, it does serve as a minor hinderence on the fight at hand. During a fight that moves in almost Hollywood-esque slow motion, the sheer amount of words coming from Legion’s head is staggering and overshadows the action at times. His words are far from inconsequential, however, and the fight takes on an entirely different context when Legion compares himself to the true heir of a kingdom and Cyclops to a protégé treated like kin. Legion’s narration also provides a line as bonkers as, “He’s accustomed to superdupers; to posturing pillocks lettin’ rip from their cosmic armpits.” You almost have to read the issue twice, once to read the narration and another to just look at the actual fight.

Artist Khoi Pham provides bulkier characters than we’ve seen in the past with regular series artist Tan Eng Haut and for an issue primarily featuring two shirtless dudes throwing punches in the rain it absolutely works. Beyond the basic fisticuffs, Pham does a nifty sketch of Legion and Cyclops as armor-clad warriors in the night sky while his solution to what was surely written on the script as, “the worm who swallowed mutantkind” looks like something out of A Nightmare on Elm Street. There is a disappointing lack of scenery change, but color artist Rachelle Rosenberg does a great service to the fighting sequences with colors to match the falling rain and the lights of the cameras watching it all unfold. Considering the surprise entrant at the end of the issue, bring on round two.