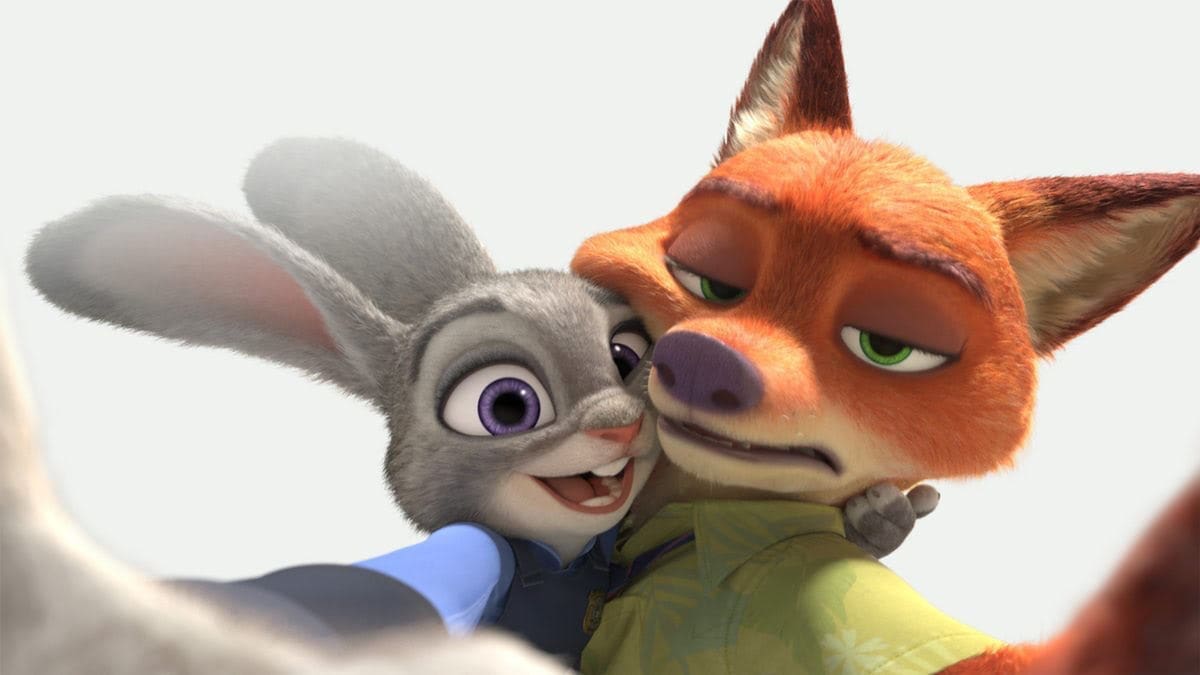 Disney has been riding high on it’s current slate of known properties such as The Avengers, Cinderella, Star Wars, and the upcoming Jungle Book to name a few.  Their Pixar branch continues to churn out a healthy dose of original content as well, but has padded their schedule with a few sequels to their beloved classics.  With all this very recognizable content being given to us, it allows the sometimes forgotten Disney Animation branch to experiment more and come at us with fresh ideas and unique stories, under the guidance of John Lasseter.  The stories still retain some familiar references, but its a clever device that allows us be drawn into the adventure and want to stay there.  Wreck-It Ralph had great success in this regard, building a world based entirely within video games.  Does that same formula work in a world composed of evolved, intelligent animals where no human ever existed?

In Zootopia, directed by Byron Howard, Rich Moore, and Jared Bush, Judy Hopps (Ginnifer Goodwin) is a young bunny living on a farm and has huge aspirations of becoming the first bunny on the police force.  When she makes her way through the academy, she arrives in the big city Zootopia and has to contend with an apathetic boss and animals much larger than her.  Her one break comes in the form of a fox named Nick Wilde (Jason Bateman), who is cunning and deceptive, but knows the city better than anyone and can get around a few protocols.  Judy and Nick, while not the most compatible duo, must solve a dangerous case that threatens to permanently erode the delicate harmony of prey and predator.

What really works with this movie is how effectively it builds this world and easily brings you in it.  Within the first few minutes, you are given an explanation for how animals started to get along and work to build Zootopia.  You also see that while these animals retain certain traits and habits you associate with them, they also walk and speak with civility and a human tone.  Still any civilization has its problems and those that are just out for themselves.  It’s a very real, familiar city, but it just happens to have architecture made for all kinds of animals and a fair amount of crime.

The police force is tasked with patrolling all the burrows of this huge city, which range from desert, to rainforest, to tundra.  The landscape itself is brilliantly detailed and I’m glad we don’t spend too much time in any one area.  We explore the breadth and scope of this city and all it has to offer, yet, like all cities, there’s plenty left to discover.

I thought the chemistry between our main characters worked well.  Ginnifer Goodwin’s character Judy has this chipper, optimistic attitude towards her problems and that contrasts with Jason Bateman’s character Nick and his sarcastic, cynical view on life in general.  They have great, playful dialogue that allows both of them to develop as the story progresses.  I have a feeling Nick was written with Jason Bateman in mind because he is definitely channeling his character from Bad Words, but with less swearing.  Other characters that are memorable are the police chief (Idris Elba), the mayor (J.K. Simmons), the vice mayor (Jenny Slate), a very zen Yax (Tommy Chong), a sly weasel (Alan Tudyk), and Judy’s parents (Bonnie Hunt and Don Lake).

As I mentioned before, there is a sense of the familiar with the story and that isn’t necessarily a bad thing.  It’s Disney’s version of a buddy cop comedy in the vain of 48 Hours or Police Academy, with nods to 70’s mob movies and current TV shows.  I feel this could be their version of a Police Academy franchise, but with better sequels.  It has humor intended specifically for adults and plenty more for kids to enjoy.  It’s an elevated, family film that doesn’t dull your senses with an overabundance of low-brow jokes.  In fact you’ll have plenty of things to discuss after the movie is over besides all the funny scenes.

The biggest thing I took away from this movie is how it tackles the concept of prejudice and stereotypes.  It isn’t some overt message being spelled out for you.  It’s more a general statement of how insecurities we harbor are acted out upon strangers we perceive to be a possible threat without any definite knowledge.  How animals react around each other the way we sometimes act around someone of a different race, gender, or sexual orientation.  We might be fearful of a lion, but a lion in this world may have spent years as a kind and generous member of society.  Should that lion be treated unfairly and disrespected because we’ve heard stories of vicious, bloodthirsty lions?  It’s a delicate subject and one that is woven into this movie with a fine touch.

Zootopia breathes new life into the buddy cop genre and gives Jason Bateman yet another environment to show off his brand of humor.  Both Ginnifer Goodwin and Bateman shine in this film and excite me for what case they get next.  All the voice actors bring their A-game and compliment our main characters.  It has lots of humor, but most of all it has heart and you can’t appreciate the former nearly as much without the latter.  The overall story is fun and refreshing, but it does veer occasionally towards the predictable.  I recommend seeing this in the theaters.  Whether you have kids or not, it is a terrific experience and one that should be shared with an audience.

Synopsis: In a city of anthropomorphic animals, a fugitive con artist fox and a rookie bunny cop must work together to uncover a conspiracy.