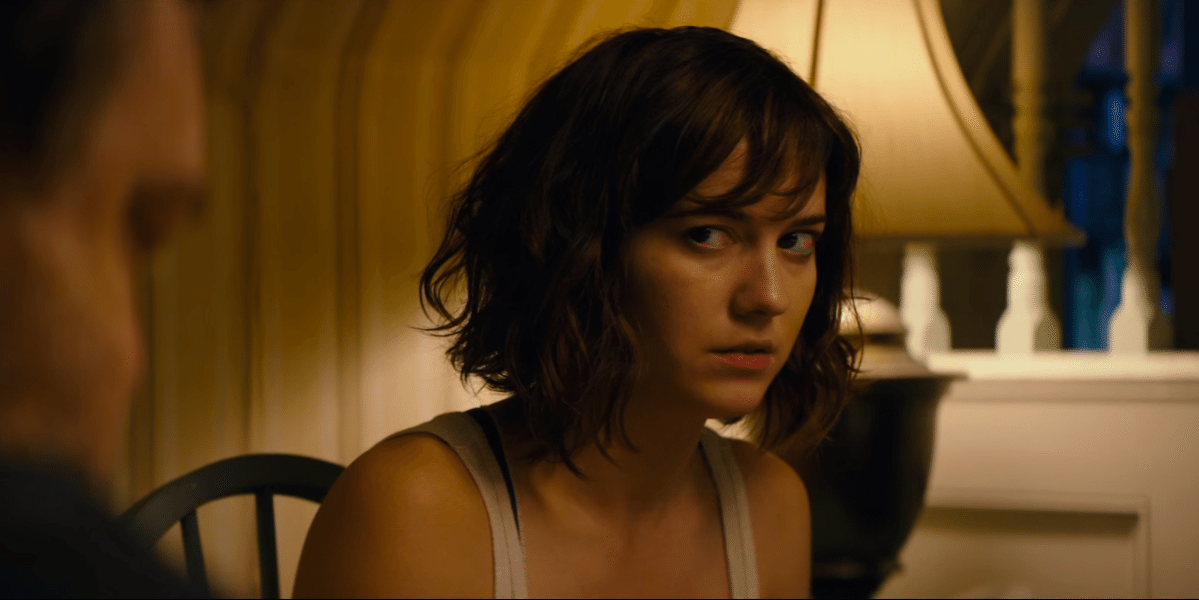 There is something exciting and refreshing about a movie being given to you with very little marketing and just the hint of a story.  You are given some information, but it’s just enough to pull you in and make you want to find out what is actually happening.  JJ Abrams handled that well with projects like Lost and Super 8.  Cloverfield was an interesting campaign because it utilized the fever pitch of found footage films by trying to convince us, in a tongue-in-cheek way, that something devastating happens in Manhattan, but doesn’t give away what is causing the devastation.  Whereas the genre had mostly resided in low-budget independent films,  this movie went in a different direction by incorporating advanced forms of CGI and improved production design.  It was a risky effort that paid off.  The camera work does leave some people queasy, but fortunately, for those of you who get sick from quick, jerky camera movements and out-of-focus action scenes, you can breathe a sigh of relief  as  this next chapter in the Cloverfield series abandons the, somewhat, gimmicky found footage format for a more traditional style.  It does still have a lot of mystery and plenty of tension to entertain us with.

In 10 Cloverfield Lane, directed by Dan Trachtenberg,  Michelle (Mary Elizabeth Winstead) is in a car accident and awakes to find herself inside an underground bomb shelter with two other men.  Her supposed captor Howard (John Goodman) convinces her of impending doom outside should she attempt to leave.  Howard is very paranoid and high strung and doesn’t give you a lot of room to trust him.  Michelle’s fellow shelter mate is Emmett (John Gallagh Jr.) and the both of them are forced to spend an unknown amount of time, with Howard, waiting out whatever it is outside to go way.  Michelle doesn’t know if any of what Howard is telling her is real or not and must figure out if escaping is the better plan than staying put.  The only known fact is a serious threat looms at their location, but is it outside, inside, or both.

I wasn’t quite sure what to expect from this movie after having experienced the spectacle of the original Cloverfield.  In some ways this film is more subdued and intimate than its predecessor, not just in scope but in location.  Two people voluntarily imprisoned with a third in a bomb shelter, constructed by a creepy shut-in who could snap at any moment.  The psychological element of the film is one that really builds tension.  While the first film dealt with immediate action and resolution, this one covers the after effects of a possible global catastrophe by including a confined space, a mentally unstable survivalist, and no escape route.

Without giving away the plot, this isn’t a sequel to the first Cloverfield.  It’s more of a distant cousin and that’s a fun way to approach these kinds of stories.  Rather than wrap up these stories with a nice bow, the screenwriters leave room for our imaginations to fill in the blanks as we constantly figure out how things might turn out.  It doesn’t necessarily give you a cliffhanger, but it provides possibilities that you are excited to explore on your own time once the screen fades to black.

The bomb shelter in this film is a character unto itself.  It’s not big at all, but somehow the camera work gives it space and the few rooms that exist hold many mysteries.  When was the shelter built and why does it have such a lived in look if it is only meant for emergency situations?  As the story unfolds, your curiosity is rewarded with many revelations.

Mary Elizabeth Winstead plays her character brilliantly, but John Goodman’s Howard really keeps your attention.  You’re almost too scared to take your eyes off him, even when the camera isn’t pointed at him.  One minute he’s playful and friendly and the next he’s a prison guard telling you what rule you broke.  The talent it took not to make that character come off ridiculous is phenomenal.  You do laugh at some of Howard’s behavior, but then you wonder if you should because it may turn into a very dark scene.  John Gallagher Jr.  also does a great job lightening up the tension when it needs it.

10 Cloverfield Lane is a terrific, action thriller, but that’s just a few of the genres you could stick this movie in.  It has science fiction, drama, horror, and comedic elements too.  The music is the first thing that brings you into the film and the characters and visuals keep you in.  I have to say the film, while edited well, does feel earnest at times and rushes the plot points more than I’d like.  You want more development with the characters, but the movie never takes its time in that regard.  What little time you do have with them is well worth it though because of the actors involved. I also like that JJ Abrams works with new directors such as Matt Reeves and now Dan Trachtenberg, allowing the story to move in new directions with a fresh vision.  Drew Goddard also has a producing credit and he’s had a lot of successes this past year.  I recommend you see this in the theaters because it’s a real surprise film this year and one that is thoroughly entertaining.

Synopsis: After getting in a car accident, a woman is held in a shelter by two men, who claim the outside world is affected by a widespread chemical attack.

Fantastic Beasts and Where to Find Them | Movie Review