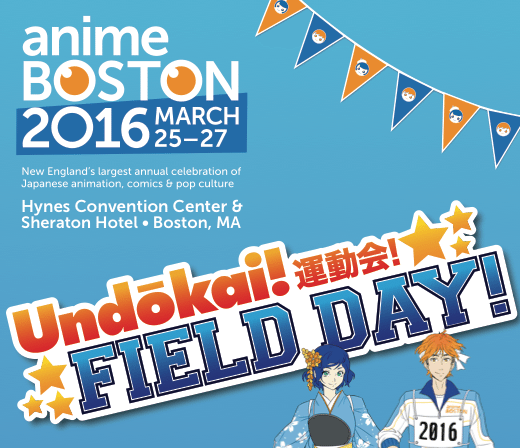 For those who don’t know much about Anime Boston, it is a 3-day convention that takes place in the Hynes Convention Center at the Prudential Center in Boston, Massachusetts. It is the largest anime convention in the north east and the second largest on the east coast (Second to Otakon). Taking place from March 25th to March 27th, Anime Boston has the theme of Undokai! Or field day! So pack up your Free! And Haikyuu! Cosplays! Anime Boston was one of my first conventions I’ve been to and have been hooked ever since. They have great guests, the location is awesome, and all around, it is fun and has a great atmosphere. If it is a convention you’re interested in, going to for the first time, or a long-time veteran, here are some things to know about the upcoming convention.

Location and What’s in the Area

Right in the heart of Boston, the Prudential Center is a fairly large one-story mall that houses the convention center. So whether you want to walk around in cosplay and go shopping in the con, or go out and about to get some new clothes, it is all easily accessible and don’t even have to leave the same building! In addition, three hotels are in the almost immediate vicinity. The nearby Marriott has a sky bridge connecting to the mall, a Hilton is right across the street from the Sheraton, one of the sponsored con hotels. Speaking of which, the Sheraton is also connected to the mall, essentially connected to it. There are many hotels around that are within walking distance of “the Pru” and even with Boston’s great transit, there are many hotels easily accessible as the Green Line subway heads right to the Prudential Center (Just be sure to get on the correct E line!)! With the Prudential right on Boylston Ave, it is a fantastic place to get food, let alone all the restaurants within the mall itself! However, as the food court had recently closed, thus, be ready to spend a little more money on restaurants than typical fast-food, albeit, with great restaurants like Wagamama, PF Changs, and the Cheesecake Factory, as well as many other more local restaurants, you’ll be more concerned with what you want to eat from all the variety! The Hynes Convention Center is massive. Boasting 176,500 square feet of space over 3 floors, it is one of the better laid out convention centers I have been to, as well as one of the largest. Generally, the first floor has a large open space room in the center that has a small divider with some passageways that serve as the main dealer’s room. Plenty of space leaves room for brief, in-passing, photo opportunities of cosplayers and famous figures, and still a decent flow of traffic that doesn’t get too clumped up. The halls themselves are also quite wide. You’ll find many people sitting and taking a break, chatting with friends, and also taking pictures. As with most con etiquette, be sure to ask for a picture first!

Registration and other Organization

This con is very, very, well run. If you pre-register, you get a code that you need to print or have on your smart phone. Simply scan it at the registration table, show your ID and BAM! you get your pass. There is rarely ever a line at preregistration or day of registration. Getting into the con is the only thing that can be hit or miss. If you get there early, you can get through bag check (also extremely efficient), and into the con easily. However, mainly on Saturday, getting to the con mid-morning can get really long and you can end up in Line-Con for a good chunk of time. Some of the hallways where the line comes out of can be rather narrow for the amount of people and is probably one of my only complaints about Anime Boston, however, like stated earlier, this is generally only at peak hours. Lines for major events are kept to a minimum and the staff helps with finding the end of a line, as well as keeping everything in order and from getting too crowded.

The guest list is very good this year, so far, as some of the guest list has yet to be announced. Usually, Anime Boston hosts a few Japanese guests. Last year, pop-idol LiSA, who sang multiple themes including Sword Art Online and the Fate series, was the guest of honor. This year, a running theme seems to be Your Lie in April, as the Japanese guests, Kyohei Ishiguro, who directed Your Lie in April among other titles such as PSYCHO-PASS and some of Fairy Tail, is one of the guests with Yukiko Aikei accompanying him. Yukiko Aikei, who was the animation director of Your Lie in April, was also a character designer for the popular Accel World, and the main design producer of the recent LOVE LIVE! series.

The musical guests this year consist of nano.RIPE, a rock group that helped with music with anime such as The Devil is a Part-Timer, Bakuman, and Non Non Biyori. ALI PROJECT, is another musical guest performing at Anime Boston. They worked on music for big hit anime like Code Geass, Rozen Maiden, some .hack series, and The Girl Who Leapt Through Space.

Aniplex takes the cake this year for American voice actors at Anime Boston. A large part of the cast from the english dub of Your Lie in April, Carrie Keranen (Hiroko Seto), Erica Lindbeck (Kaori Miyazono), and Max Mittleman (Arima Kousei), all making an appearance The big man himself, Patrick Seitz makes another appearance at Anime Boston. Seitz is one of the most popular voice actors in English dubs, boasting a large resume of anime and video games with works like Laxus from Fairy Tail,  Gamagoori from Kill la Kill, as well as parts in StarCraft II, League of Legends, and World of Warcraft, being some of the most notable. His work in script-adaptations and English dubs in anime and games, is also well-noted, keeping on the theme of working in Your Lie in April, as well as Space Dandy, Fire Emblem: Awakening, and Steins;Gate.

The guests of honor this year are Tony Oliver and Eric Vale. Oliver has played in many movies such as Hoodwinked Too and the Muppet’s Wizard of Oz, as well as anime and games with parts in Cho-Bits, Naruto, Everquest, World of Warcraft, and Dynasty Warriors.

Vale also has an impressive list of works as Kimblee in Fullmetal Alchemist, Trunks in Dragonball Z, and Nishiki in Tokyo Ghoul. Including voice acting, Vale is an establish script writer, producing and writing the film Chariot, and writing for over 50 anime programs.

This is only a small look into the guest list and that even more great talent is being announced! As with any convention, cosplay is a major part of the event. With Anime Boston being one of the premier anime conventions on the east coast, many people pull out all the stops, however, the friendly environment is comfortable to all, games, anime, and pop culture alike. In addition, all ranges of cosplay will be there from closet to full blown armors, no one will ever feel out of place here. Including just cosplay itself, there is a pleathora of activities ranging from pre-applied events like Cosplay Dating Game, Cosplay Chess, and Deathmatch, to more improvisational events like Cosplay Shenanigans, cosplaying here is always loads of fun! The panels all come in a wide variety, depending on who signs up at the correct time. Cosplay tutorials, anime discussions, cosplay games, and other ahem topics (wink, wink, nudge, nudge), all will make their appearances and never leave a dull moment at this convention.

Unfortunately, the schedule has not been released and does not get released until, roughly, a week or two before the con. For people like me, who love to plan and see what is going on, this is a terror. However, the Anime Boston staff is merely making sure everything can run smoothly and taking care of any last minute additions or drop outs to panels.

Should you go to Anime Boston? Yes. This con is one of the best on the east coast. The city of Boston is incredible, with a lot to do and eat. The con venue is great, good spacing and scheduling, and the atmosphere is exhilarating and fun. One of my favorite cons of all time and on that I will continue going to as long as I can. Hopefully I will see you there!

In the meantime, catchya later!