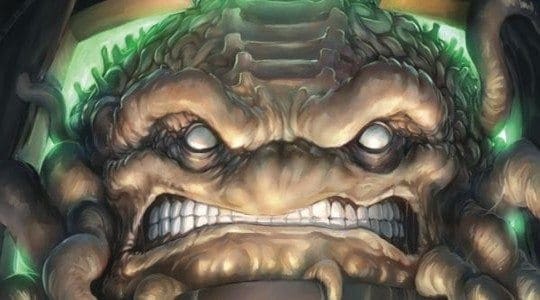 This week, John Layman writes about seamen in “Chew” #33, Corey Taylor‘s (singer from Slipknot) new comic book from Dark Horse Comics titled “House of Gold & Bones” #1 (related to Stone Sour’s newest album) hits shelves this week, Both “Justice League” and “Wonder Woman” #19 are most certainly WTF certified, Both “Daredevil” titles are well worth it this week, and a new “Star Wars” book? SIGN ME UP. Trapped in an alternate reality, the Human must make his way to the House of Gold & Bones as he is chased by a crazed mob, and taunted by mysterious ally, Allen. What the Human discovers on his journey will either be his salvation . . . or his destruction.

* Inspired by the Stone Sour album House of Gold & Bones. What is the one way Wonder Woman can stop Orion? Tony takes on a load of seamen. Who is the one person dangerous enough to use Kryptonite against Superman? … BATMAN?! The mystery of Daredevil’s final days leads Ben Urich through a gauntlet of the Man Without Fear’s enemies!

The trail brings Ben to The Church of The Hand. . . and a confrontation with Daredevil?!

The penultimate chapter of Daredevil’s final tale is here – and some of his greatest creators are here to tell it! 5. He-Man And The Masters Of The Universe #1

First exciting issue of the new, ongoing adventures of He-Man and the Masters of the Universe!

While the Masters of the Universe mourn the loss of a fallen friend, Hordak infiltrates Eternia!

Featuring the return of She-Ra! Now known as Despara, the most lethal weapon in Hordak’s army, she returns to Eternia as He-Man’s newest enemy! The hidden foe behind DD’s troubles plays his trump card!

Foggy’s life is on the line!

Plus: Who is Nelson & Murdock’s mysterious benefactor–and what does he want? Eight assassins hired to murder Darth Vader-eight assassins dead. Now the man who enlisted them seeks a ninth assassin. The price? A cost higher than all the credits in his bottomless coffers. But when it comes to avenging his son, no sacrifice is too great to acquire the one man who can kill the Dark Lord of the Sith . . .

The Hunt for Darth Vader is on!

* Tim Siedell (@badbanana) has one of Time’s 140 Best Twitter Feeds! Devil on one shoulder – angel on the other.

Bad news for a recovering alcoholic if the “good” one is MIA.

Between a liquor-gulping demon and a mummified cat hell-bent on mucking up his fragile stability with esoteric trappings of Egyptian Gods, it’s all about to make our hero’s day hit the proverbial fan. Krang was not always the feared warlord he is today. Once he was the spoiled prince of a falling dynasty. One disastrous mission to a penal colony planet changed all of that! Stranded by himself and surrounded by enemies, Krang faces the ultimate test for survival! See how this seemingly helpless alien grew to become a legend. . . and a leader!