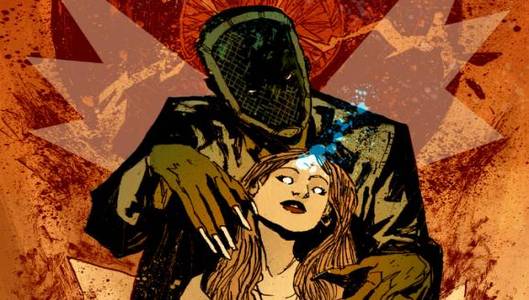 This week, both “Superboy” #20 and “Suicide Squad” #20 gets a new creative team, Marco Checchetto is drawing “Avenging Spider-Man” #20, which excites the crap out of me, Scott Snyder and Greg Capullo‘s “Batman” will continue to kick-ass with issue #20, and looks like Carrie Kelley might be getting more screen time in “Batman And Red Robin” #20. New robin, maybe? Thor in chains. Gorr transcendent. All hope for divinity lost. As the clock ticks down on one very large bomb, as enslaved gods look to the skies for a savior, enter. . . the Girls of Thunder?

‘BLOOD AND STEEL’ begins as The Teen of Steel decides it’s time to become more proactive in his battle against evil. But how far will he go before he crossed the line?

Then he teams-up with your SUPERIOR Neighborhood SPIDER-MAN!

I PROMISE HE KILLS ONE OF THOSE TWO THE CHAMELEON SANCTION PART 1 of 2

Can Spider-Man keep his secrets while facing off with the Secret Avengers?

SHIELD has the Chameleon. The Superior Spider-Man wants him. Time to break into the SHIELD Helicarrier!

After the shocking events of issue #19, the team returns to Belle Reve to lick their wounds and bury their dead-but when they find out what’s waiting for them at the prison, they’ll wish they were back out in the field!

Plus: Who are the two killers Amanda Waller has recruited to shake things up, and what are their true motives for joining the team? The massive fallout from the recent events in BATMAN, INCORPORATED take Batman to the very limits of his sanity. . . will The Red Hood pull him back-or push him over the edge?

A strange visitor comes to Gotham City when tragedy delivers the team-up you’ve been asking for since the start of The New 52! Shaw is a man on the run and lost in time. Fleeing ancient enemies, Shaw finds himself in prohibition-era Chicago surrounded by gangers and demons alike and caught between law enforcement and the local supernatural underground.

CHIN MUSIC is a tale of mysticism and violence like nothing you’ve experienced before. This horror-crime hybrid is the latest comic book from the legendary Wu-Tang Clan’s RZA and Ghostface Killah.

A brutal tale of gangsters, betrayal, and one vengeful soul hunting the 12 most powerful crimelords in the world.

*12 Reasons To Die is a multi-platform, transmedia concept project with a storyline that spans from the comic book to the new Ghostface Killah album released simultaneously by RZA’s Soul Temple Records.*

Chuckie is blogger for fine sites such as Geek News Network and Comic Book Therapy. Burrito enthusiast would be the best way to describe him. Follow Chuckie on twitter @dweebofthedead to read just how much he loves Batman, kind of like a man-crush, but not really. Ok — really.

A MISSING BOY RETURNS TO CLAIM HIS BIRTHRIGHT