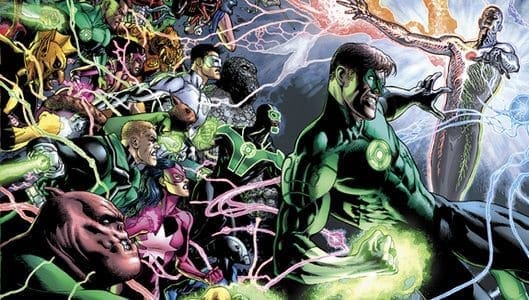 This is the way the list works: I tend to add more books that ARE new reader friendly than those that are NOT. But usually, it’s just a list of books I’m excited for, and you should be too.

This week(end), Phoenix Comicon hits the valley (be there or be square!), James Stokoe’s “Godzilla: Half-Century War” trade paperback hits shelves (pick it up, it’s really good!), artist Chris Burnham takes over writing duties for “Batman, Incorporated” #11, comic book legend, John Ostrander, writes this weeks “Aquaman,” and lastly, Geoff Johns ends his nine year run on GL with “Green Lantern” #20. Also, I wanted to highlight some of DC Comics’ digital first series such as “Adventures of Superman,” “Injustice: Gods Among Us,” “Arrow,” “Legends of The Dark Knight,” and “Batman ’66,” which is set to come out soon! All those titles are spectacular and worth giving them a shot, especially with a 99 cent price tag. Lastly, anyone else excited for this?

Introducing a new and exciting look at Godzilla’s reign of destruction, courtesy of Orc Stain creator James Stokoe! The year is 1954 and Lieutenant Ota Murakami is on hand when Godzilla makes first landfall in Japan. Along with his pal Kentaro, Ota makes a desperate gamble to save lives… and in the process begins an obsession with the King of the Monsters that lasts fifty years!

Deadly technology glitches continue to plague Mega-City One, and Judge Dredd has been targeted for assassination by one of his own! But Dredd continues to investigate and realizes that the machines aren’t just trying to ruin humanity’s day. They’re part of a much larger plot to hijack our very souls.

‘CHILDREN OF THE SUN’

A day in the life of the Avengers. . . in the Savage Land.

The boys go hunting for dinosaurs and end up catching something else entirely.

A slight break in the action, as we check back in with the Batman of Japan once again!

The PROLOGUE TO TRINITY WAR continues as a revelation about Pandora’s Box could destroy Wonder Woman and Superman’s relationship! As the Scavenger compiles more Atlantean weaponry and artifacts, Aquaman enlists the aid of The Others to help find one missing relic in the Southwestern United States before his enemies can get to it.

A DOUBLE-SIZED EXTRA-vanagnza celebrating the third-year of the acclaimed series!
Face to face with his opposite number–a foe Daredevil cannot beat!

What is his connection to the accident that created Daredevil?

PLUS: As Foggy deals with his cancer, Matt turns to one of the brightest guys in the galaxy for help.

INVENTORS! EXPLORERS! ADVENTURERS! Do you need money to finance an important project? Then you should set up a meeting with THE GREEN TEAM!

• Does your project have the potential to:

Piss off The Justice League? __

If any of the above are checked, please fill out liability release form GT2013-05. Send any 82 drawings, plans, models, or photos with request.

Chris Yost, Kaine and the Scarlet Spider family welcome superstar artist CARLO BARBERI to the book — and it’s just in time for SCARLET SPIDER vs. WOLVERINE!

Kaine owes a favor to the Assassins Guild… one murder. And guess who they want dead? Hint: SNIKT!

Guest starring the faculty and students of the Jean Grey School, aka the X-MEN. Step into the darkness with the brand-new Dark Horse superhero Blackout, written by Frank Barbiere with art by Micah Kaneshiro! Get ready for sci-fi action with the return of Ron Randall’s Trekker! Take the case and save the world with Donny Cates and Eliot Rahal’s Hunter Quaid! Plus, new installments of Alabaster: Boxcar Tales, Nexus, Crime Does Not Pay, Brain Boy, King’s Road, Bloodhound, and Villain House!

“Dark Horse’s prestigious anthology series . . . showcases emerging talent alongside some of the greatest writers, artists and cartoonists comics has to offer, as well as promising new and underground talents.”-ComicsAlliance It’s the final battle against the First Lantern and the Guardians in this, the extra-sized finale of Geoff Johns’ historic run on the title! Plus, don’t miss a special retrospective on Geoff’s run on GL!