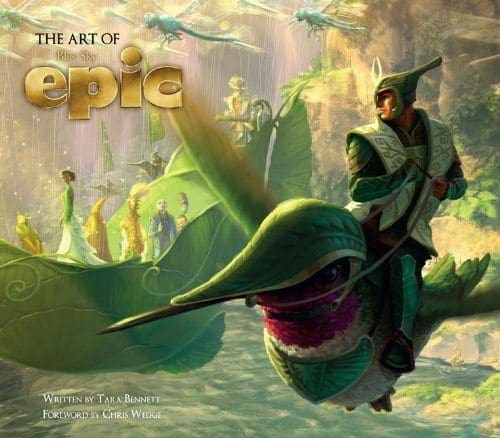 That was my reaction when I received “The Art of Epic” in the mail.  I did the same thing after taking off the dust cover; the hard cover beneath is a vivid leaf design: full of little veins and green.  That attention to detail is stunning in a book, which suggests good things about the movie. Art books have the ability to discuss story-line and characters without giving away major spoilers, but I will say that my fears that Epic could turn into a gender-swapped, CGI version of Fern Gully have been mostly mollified. The artwork in Epic lives up to its name–and I’m fairly confident that the plot will, too.  In any case, I have no doubt the movie will be gorgeous.

The word “epic” makes you think on a giant, grand scale, so it’s a bit ironic that this universe takes place on a microscopic level. The team at Blue Sky (creators of Ice Age and Robots) have done this intentionally.  They have been developing and refining this miniature universe for years, and this project represents an ambitious leap from their other endeavors. The goal of Epic, is, of course, to BE epic.

“The Art of Epic” includes sections on all the major characters and locations and describes their creative development. For example, all versions of the story featured an absentminded scientist character, but Professor Bomba didn’t become Mary Katherine’s father until the fourth version of the story was developed.  From the ethereal Moonhaven to the decrepit Wraithwood, the scenery is stunning.  I loved reading and seeing how the artists researched what it would be like to live in the forest at two inches tall, which at one point included handcrafting swords from toothpicks and twigs and venturing out into the woods with miniature cameras to capture the perspective from the forest floor.  The book also describes Blue Sky’s creative process when approaching ambitious scenes, such as the Boggan attack in the lily pond, which director Chris Wedge describes as “one of the visual standout moments in the film.”

My one desire for this book is that it could have contained more inspiration art.  I understand that there were probably copyright issues with using images from executive producer and production designer William Joyce’s children’s book “The Leaf Men And The Brave Good Bugs.”  There were other inspirations mentioned that I would have loved to see, such as the Victorian fantasy paintings described on page nine, or the “alarming-looking humanoid structures [made] out of glued-together seashells” that recalled the Boggans. I’m certainly not complaining about all the gorgeous original artwork, but I would have liked to see some of the things that were only mentioned.

If I take one thing away from reading “The Art of Epic”, it’s that the team at Blue Sky has worked very hard on making this movie a worthwhile project.  Their goal all along has been to bring to life a universe that you could really imagine existing beneath your feet and in the corner of your eyes.  That it will be beautiful is a given–but both in terms of production value and storytelling, they want this to be a film that sticks with you. I look forward to seeing the detailed woodland cities, samurai inspired Leaf Men, innovative miniature weaponry, and recurring hummingbird and fractal motifs that I have read about in this art book.

Epic will be in theaters on May 24th, but don’t let that stop you from checking out “The Art of Epic” today.