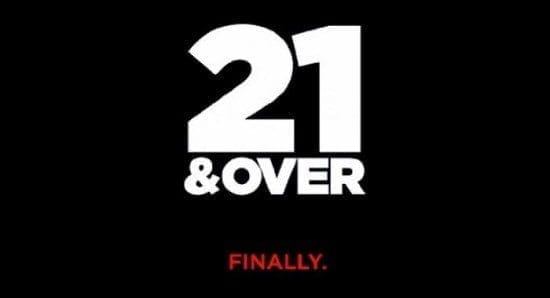 I’m going to start things off with a bang, this movie sucked. I wasn’t expecting an Oscar caliber movie, but this thing was just…no words can describe it. Oh wait, yes they can, terrible, unfunny, painful, and pretentious, I could go, I will go on, but hopefully in a more articulated manner.

21 and Over is nothing original, three twenty-somethings go out for a night of partying and when one of them gets too drunk and passes out it is up to the other two to get him back home in time for an early morning interview. Hijinks ensue. Not being original is not the problem, as long as you can bring something new to the table. 21 and Over tries to use over the top antics to overcome this, unfortunately it falls flat on its face. I sat with my arms crossed the entire time, like a jerk, and rolled my eyes once or twice.

Miller (Miles Teller) is the titular trouble maker and loud mouth of the group. He seemed to channeling some sort of Vince Vaughn/Sean William Scott combination in an attempt to funny, but only comes off as annoying.  Jeff Chang (Justin Chon) is the one with the early morning interview and passes out pretty early in the game, kind of embarrassing if you ask me. He spends most of the movie in a comatose state and is carted around town in a Weekend at Bernie’s fashion. As you might have suspected at one point in the movie he disappears, which causes trouble for the other two. The one character who was a breath of fresh air when they were on-screen was Casey (Skylar Astin). You may remember Skylar as Jesse from last year’s Pitch Perfect. He is the stoic one of the group who follows the rules and never gets into trouble. This kid has some real talent, and as long as he stays away from dreck like 21 and Over he should go far in the business. Did I mention he’s dreamy? Wait, what?

This movie was pretty terrible, but that doesn’t mean it wasn’t without its good parts. One of the “bad guys” is the boyfriend of Casey’s crush, he also happens to be a cheerleader, or yell leader as he prefers to be called. This “yell leader” has two, what I’m going to call, yell minions. These two guys egg on their leader, not with the usual banter, but with the most obvious statements. Towards the end of the movie yell leader smashes Jeff Chang’s lamp and one of them yells “yeah, that lamp will never work again!” They were like a pair of Brick Tamland’s best parts.

21 and Over tries to win over the younger crowd with being as politically incorrect and raunchy as it can possibly be. The problem here is that saying the F-bomb as many times as possible does not equal funny. I’m not against the R rated comedy, in fact I don’t think there are enough of them, I simply want one with brains.

Synopsis: The night before his big medical school exam, a promising student celebrates his 21st birthday with his two best friends.