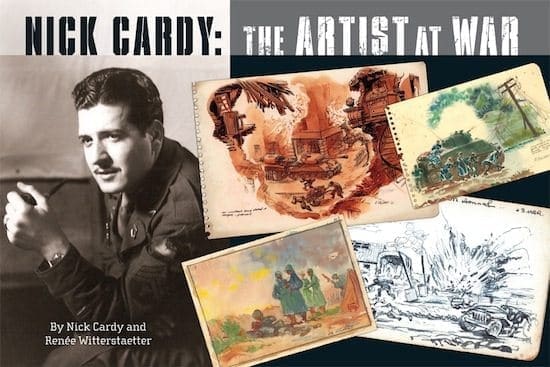 Nick Cardy is one of the most prolific comic book artists to ever grace the medium. He has drawn for many publications but most notably for DC on titles which included Aquaman, Teen Titans, Superman, and, of course, Batman. Nick started the artist life early on drawing covers for low wages until being drafted into World War II. He also designed and drew many movie posters from his era. In 2005 he was inducted into the Will Eisner Comic Book Hall of Fame.

Nick Cardy: The Artist at War is a collection of drawing he did during his time serving in the military. When he was overseas he carried around small notebooks that he used to draw scenes from everyday life. Things as mundane as soldiers drafting maps and eating at the mess hall to more dramatic scenes like the shelling of a film factory in Wulfen and ships being blasted with torpedoes. There is an interesting introduction from the books author Renee Witterstaetter and Nick Cardy himself which gives a little background on the book and Cardy. Cardy also gives each picture a little caption or story behind it.

I was interested in this book not for the Nick himself, but because I’m fascinated with World War II and I found it intriguing to find out what this guy had interpreted over there. I don’t necessarily see a direct comic book influence on his drawings as these are exactly what he saw over there, but they are extremely life like drawings. This book encompasses everything from rough sketches to watercolor paintings that he did using a makeshift palette. This book will appeal to comic book fans, art enthusiasts, and World War II aficionados alike.

Check out some of Nick’s drawings below.

From Nick Cardy: The Artist at War