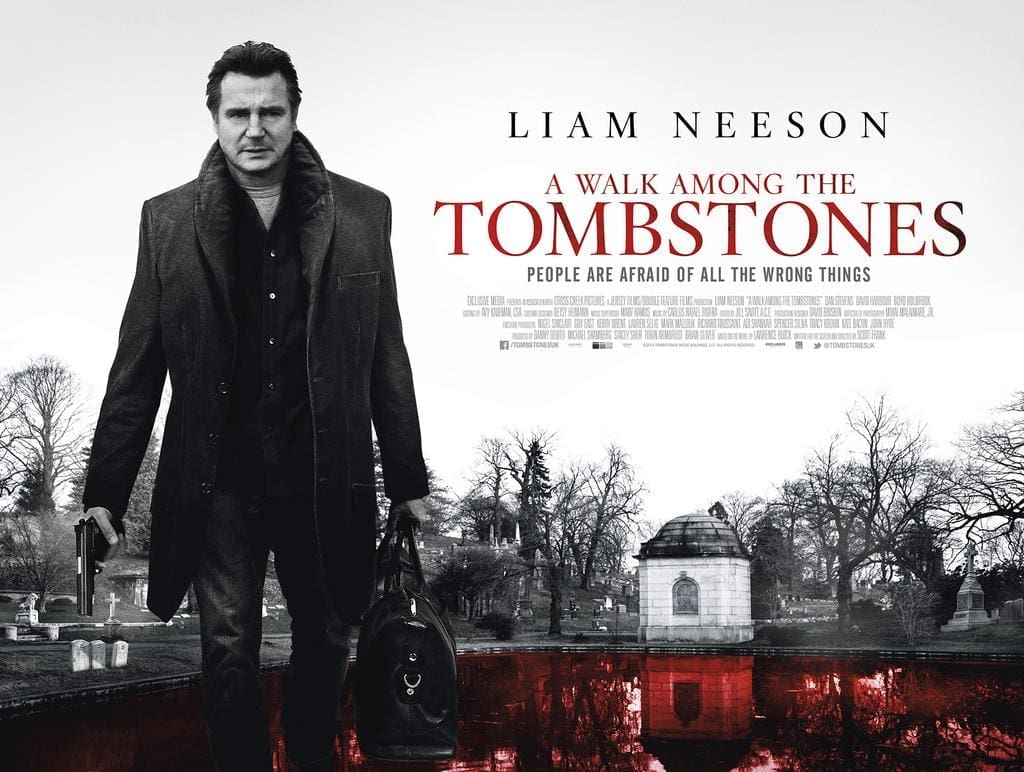 Liam Neeson has settled nicely into the role of experienced badass who tackles any obstacle in his way.  Whether he’s rescuing his daughter, or his wife, or just laying out justice one bullet a time, rest assured you’ve put your faith in the right man.  With his latest film, he shows us how he handles being a ruthless private investigator on the look out for serial killers.  Nothing fresh or new, but it’s Liam Neeson and that’s all that matters.

In A Walk Among The Tombstones, directed and written by Scott Frank, Matt Scudder (Neeson) is sought out by a drug trafficker to help find his wife’s killers.  Despite his reluctance, he agrees to investigate since future kidnappings and deaths are likely.  The killers themselves are very clever, repainting their getaway van after every abduction and changing their appearance to confuse witnesses.  They also have a taste for torture and dismemberment; so the urgency of this case motivates Scudder even more.  The time period of this movie is 1999 so cell phones are a luxury and computers don’t mean much to this old-school detective.  Luckily, he comes across a homeless boy named TJ (Astro) who is very knowledgeable of computers, courtesy of the public library.  TJ shows a rather curious excitement for solving crimes, which Scudder is hesitant to encourage, yet it gives the boy something to do outside of roaming the city.  With the killers searching for another prey, Scudder follows the clues laid out by their previous victims.

The idea of a detective seeking out a serial killer has been done all too often and in better form, especially on television.  When you can’t show anything new you do the next best thing and present some interesting killers.  The personalities of our psychopaths are despicable by every stretch of the imagination and luckily they leave a good portion of the disturbing imagery off-camera.  We as an audience aren’t nearly as invested in finding them to stop their endless murder as we are in getting them into Liam Neeson’s hands to see them dealt with properly.

The other piece of back story to Neeson’s character is his ongoing battle with sobriety which he’s held onto for several years following a nasty shootout at a bar.  We see him attend AA meetings and tell the same story over and over again of why he quit.  It’s something we don’t know fully until the end, but it’s bad enough to keep him away from the bottle and also make different decisions that he feels will atone for his misdeeds as a crooked cop.

Aside from the kidnapping lunatics, the interactions between Matt and TJ are also enjoyable.  It’s a modern day Dick Tracy and the kid pairing.  Matt is the seasoned veteran who prefers the straightforward approach to questioning and gets results effectively.  TJ watches his back and learns some things from his mentor.  It’s not the most realistic idea to team up with a kid if only just to keep him out of trouble when you’re looking for two deranged maniacs, but this is the 90’s so that premise actually makes sense. It might work more so as a comedy, but it works well enough.  Still if there are more cases down the road, I wouldn’t mind seeing these two team up again.

A Walk Among The Tombstones is based on a novel by Lawrence Block, who has several more involving the character Matthew Scuddard.  While I’ve not read it myself, I’ve heard it is a terrific book and is worth this film adaptation.  I would love to see one of the earlier books turned into a movie as well.  Showing the heavily flawed, crooked cop with substance abuse issues managing to still take down criminals is, again not an original story, but the trick is in the execution;  A new take on Dirty Harry even.  It’s difficult to translate the same intensity and suspense you get from reading a good book into the movie version, but what Tombstones lacks in that regard is compensated with a decent crime-solving premise led by an actor who knows how to make an impression with just his appearance.  Sometimes it’s played for laughs, but it keeps you interested nonetheless. When the stakes are beyond dire and you’ve exhausted your options, you get Liam Neeson, or whatever he’s calling himself, to finish the job.

A Walk Among The Tombstones:[usr 3]

About A Walk Among The Tombstones

Synopsis: Private investigator Matthew Scudder is hired by a drug kingpin to find out who kidnapped and murdered his wife.