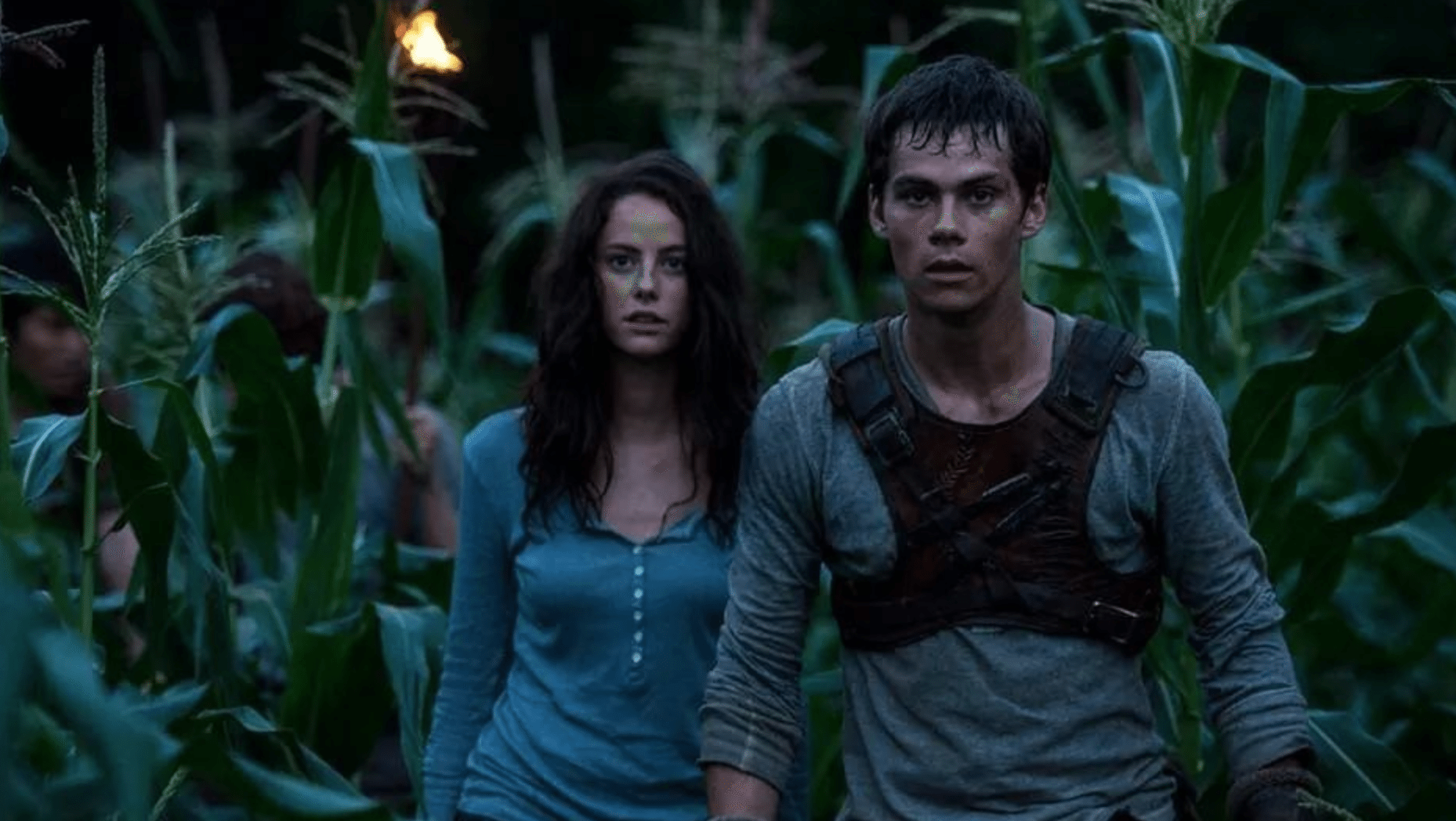 The young adult book genre has had a stellar year in Hollywood. Ever since the universal popularity of The Hunger Games, the studios’ need to find the next great franchise has been unrelenting.  Earlier this year we were given Divergent, then more recently The Giver, and now for our next sample of strange, dystopian societies we have one that tries to set itself apart from the bunch.  It offers familiar, angst-ridden characters along with the mysterious government that may or may not have honorable intentions.  It makes you ask questions you hope are answered in the movie you’re watching, but seldom is that the case.  As we have come to realize, the main objective of a film franchise is to get you excited for the one to follow.

In The Maze Runner, directed by Wes Ball, a boy with temporary amnesia, played by Dylan O’Brien (Teen Wolf) arrives unexpectedly in a walled enclosure nicknamed by its inhabitants as the Glade.  Upon awakening he meets Alby (Aml Ameen), the leader of the group and most respected.  Alby shows him around and provides the rules for living there.  He also brings up the maze – a very high and incredibly difficult series of corridors and traps that surrounds the Glade.  It is forbidden to enter the maze without permission from the group and the select few who have it are known as Runners, a role we later discover he is very good at.  Guided carefully by Minho (Ki Hong Lee), the Runner leader, they enter by day, mapping every area they pass through, and return before nightfall when the maze closes down automatically.  At night the maze becomes even more dangerous as creatures roam about, preying on those foolish enough to get left behind.

The main objective, it seems, is to find a way out of this elaborately constructed prison. But, why give these boys a chance to escape in the first place?  Again, the movie sets up questions you hope pays off later.  There doesn’t, at first glance, appear to be a rational explanation for their imprisonment or the amount of resources spent constructing such a massive structure.  So you go along with it because the maze is pretty much a spectacular puzzle you desperately wish to see solved.

None of the characters stand out with the small exception of a few who provide some relief from the monotony of life in the Glade.  There is the younger of the group Chuck (Blake Cooper) who gives us some funny moments and lines.  The group is good at following their self-imposed laws including Gally, played by Will Poulter (Meet The Millers).  His steadfast adherence to the rules bumps up against the newcomer’s escape-at-all-cost approach to their situation, so the inevitable explosive conflict arises.  We also meet the friendly and open-minded Newt, played by Thomas Brodie-Sangster (Game of Thrones).  He gives us some exposition as the story moves along so we aren’t totally lost.

I’m so used to Lord of the Flies scenarios that I half-expected this group of boys to turn into savages later on.  While Gally does have a temperament, it’s a pretty civil society with little interference from the outside world.  However, at times, a little savage conflict could have moved the scenes along when we weren’t in the maze.  It may have been meant to build suspense, but it came off as a meandering pace.

As for the maze itself, it’s very fun.  You have elements of Harry Potter and the Goblet of Fire mixed with a bit of Indiana Jones and the Temple of Doom.  The action is where the movie hits its stride, but it takes some time getting there. You hope it doesn’t stop, but there is still more story to cover, so you are left wondering what else is in store.

Overall I found The Maze Runner to be an interesting premise with a confusing ending that leaves too much unanswered and most likely requires a second viewing.  The book it’s based on may have done a better job explaining it so I won’t worry unless the second movie doesn’t clear things up.  There is a grander story waiting to be presented to us and if it had been shown before this one finished, we could have been more motivated and excited for the second movie.  The benefit of a franchise is it allows us to get as much of a story without leaving anything out, but each movie must stand on its own first and this one doesn’t.  In spite of all that, you will find several things to enjoy here.  The only other thing I would have wanted is some dry British humor and then I could have made a Labyrinth reference.  Now there’s a maze I could get lost in.

About The Maze Runner

Synopsis: Thomas is deposited in a community of boys after his memory is erased, soon learning they’re all trapped in a maze that will require him to join forces with fellow “runners” for a shot at escape.

Jessica, I want to go see this.