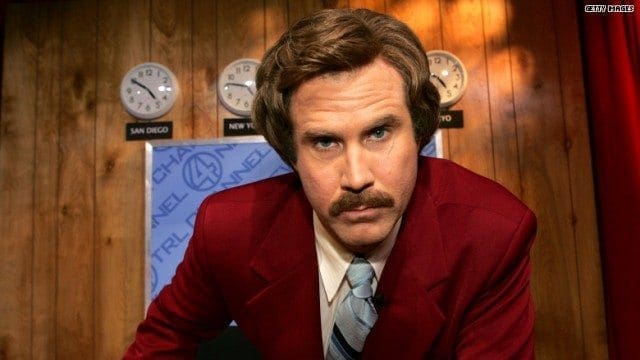 What better movie to get its own museum exhibit than Anchorman? Well maybe a few, but this is still pretty cool.I’ve never been to Washington D.C. let alone the Newsuem, where the exhibit will be displayed, so those of you on the east coast will have to let us all know how it is.Check out the press release below to find out what the exhibit has in store.

The original film, written by Will Ferrell & Adam McKay, directed by McKay, and starring Ferrell, Christina Applegate, Paul Rudd, Steve Carell and David Koechner, takes a comic look at a 1970s-era television newsroom and the legendary local anchorman who ruled it until a female reporter arrived to challenge the all-male news team. “Anchorman 2: The Legend Continues” reunites Ferrell and McKay with the original cast.

Included in “Anchorman: The Exhibit” will be costumes worn by the Channel 4 Evening News team and a number of original props from the movie, including Ron Burgundy’s jazz flute and the whip used by rival anchorman Arturo Mendez during the film’s memorable fight scene between rival news teams. The exhibit also includes a re-creation of the KVWN-TV anchor desk and news set where visitors can pose for photo ops.

“For millions of viewers, the news anchor represents the authority and credibility of television news. But anchormen and women also are popular targets for pop culture laughs,” said Cathy Trost, vice president of exhibits and programs at the Newseum. “The exhibit explores the reality behind the humor of “Anchorman” and tracks the rise of personality-driven news formats in the 1970s.”

Visitors to the exhibit also will have an opportunity to step in front of the camera and participate in an Anchorman-themed TV spot at one of the Newseum’s Be a TV Reporter stations. With lead anchor Ron Burgundy providing a snappy introduction, budding reporters can find out if they have what it takes to become a member of the Channel 4 News team. The exhibit also will feature clips from the movie and special commentary by Will Ferrell.

“I’m literally trapped in a glass case of emotion,” said Ron Burgundy, commenting on his inclusion in the museum’s exhibit.

The mission of the Newseum is to champion the five freedoms of the First Amendment through education, information and entertainment. One of the top attractions in Washington, D.C., the Newseum’s 250,000-square-foot news museum offers visitors a state-of-the-art experience that blends news history with up-to-the-second technology and hands-on exhibits. The Newseum is a 501(c)(3) public charity funded, in part, by the Freedom Forum. The First Amendment Center at the Newseum and in Nashville and the Diversity Institute serve as forums for the study and exploration of the First Amendment. For more information visit newseum.org or follow us on Facebook and Twitter.

Anchorman 2: The Legend Continues is scheduled to hit theatres December 20, 2013. Check out the trailer below.