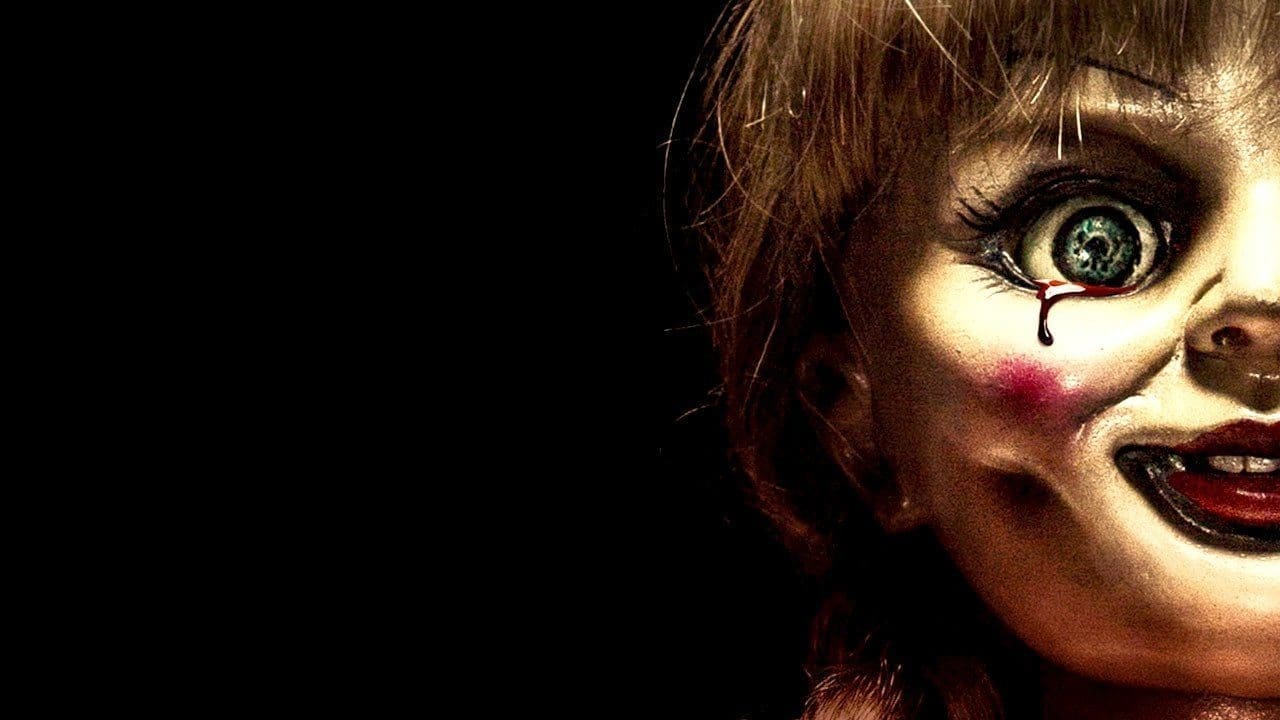 It’s always good to find a way to put your audience in a unique, but familiar setting when you’re developing a horror movie.  It gives us a connection to the story and still provides us that unsettling feeling that something isn’t quite right.  In this case it’s an apartment in California, but it’s set in the 60’s during a period when devil worship and cults have become mainstream.  The amenities of modern life we take for granted to stay in touch with loved ones at any moment is not at our disposal which means in times of crisis you are, for the most part, on your own.

In the movie Annabelle, directed by John R. Leonetti, Mia and John are preparing for the birth of their daughter.  John is even more anxious about a potential job opportunity at one of several hospitals.  His wife collects antique dolls and, as a gift for the baby, John finds the perfect complement to her collection.  Meanwhile the state is in the grips of fear as the followers of Charles Manson run loose, randomly murdering victims in their wake.  An encounter with one such follower, named Annabelle Higgins, leads to a deadly attack and eventually a doll being possessed.  Annabelle writes a strange symbol on the wall before committing suicide with the doll in her hand.  The doll itself does nothing except for giving off some eerie vibes and having a very unappealing gaze. The energy that soon resides within, however, has lots of power and isn’t afraid to show it off.  Mia has to grapple with the idea that strange and dangerous forces have surrounded her family and she is unable to fully convince her husband or their priest of this realization.  Because in the age of reason, who would suspect the doll.

The main setting of the film takes place in an apartment building in Pasadena, California, but a building more like one you’d see in New York.  The building, the time frame, and the overall suspense reminds me of Rosemary’s Baby in some ways.  Mia is at home alone almost constantly with her daughter and hears familiar noises throughout the day.  Eventually she hears unfamiliar ones; which leads to unfortunate discoveries.  The doll sits atop a bookshelf in the baby’s room among several other less possessed dolls.  As the strange occurrences become more pronounced, Mia decides to research Annabelle’s history and her involvement in the occult.  The detective on the case provides her with key information and her new neighbor Evelyn (Alfre Woodard), who runs a local bookstore, directs her to the occult section.  Evelyn even encourages her to do anything she must to protect her family.  Her sympathy for Mia’s situation fills that best-friend role Mia’s life has been missing and desperately needs at this exact moment.  Based on Mia’s findings, she is now a mother in a showdown with a demon.  Throwing the doll away won’t help because the demon is determined to get what it wants.  It’s a nefarious agenda with an inevitable outcome.

The movie is a prequel to The Conjuring and takes place one year prior to those events when we first met Annabelle in the apartment of a nurse.  The Conjuring was directed by James Wan, famous for starting the Saw franchise.  He has a talent for building suspense and developing great scares on-screen.  You can see several examples of this in his Insidious films as well.  His director of photography, John R. Leonetti, takes over the reins in this movie and continues that trend by providing brilliant scares using both the camera and sound effects.  Simple motions towards shadows and ceilings heighten the viewer’s sense of awareness leaving the audience with a collective insecurity of what is to befall our unfortunate couple and their child.

Sometimes with great horror movies, what you don’t see is far more frightening.  Annabelle plays around with darkness as much as it does with light and causes you to second-guess what you’re seeing.  Once those fleeting images are shown again later with more definition, confirming your suspicions, it increases the fear quotient.  The sounds that creep in and out of focus add to that experience.  Even lullaby music is a discomfort.  The entire apartment is a playground of demonic mischief and Mia has little idea of how to combat the situation.  We are left by her side hoping she kind find any help to rid her family of this curse.

The doll is used very minimally and this helps enhance its creepiness.  It’s not like Chucky dancing around causing mayhem.  It’s just a vessel that a demon, and Annabelle, uses to communicate to its victims.  Unlike Chucky it doesn’t need to get a stepladder to reach the top shelf and grab a knife.  Its entity can move around quite freely without any detection; and once it does reveal itself, it’s best to leave that room.  It’s also not confined to one room.  The doll does appear in random locations so the demon can’t cause too much trouble without it being nearby.  Another very strange image is seeing the doll show human characteristics such as bloodshot eyes.  The audience attributes more fear to the doll than the doll itself gives off which is a clever technique.  Much like seeing shapes in the darkness, what we perceive to be impending danger from an inanimate object is even more effective than giving us a scare up front and hoping we scream.  Luckily for this movie, both techniques were used and both were effective.

I enjoyed Annabelle even though I could have used more frequent scares and it does have a softer ending than I would have hoped.  However I am glad that the movie gave the characters some decent dialogue between those scares so as the tension built we connected better with them and wanted them to survive this ordeal.  Not to mention they had a baby and as a parent I was horribly afraid of anything that might have happened to her.  One scene in particular near the end was very jarring and again what they don’t show you still plays out in your head and doesn’t go away.  It’s a great setting for a horror movie and makes me want to watch Rosemary’s Baby again.  Leonetti shows he can handle suspense as a director so I’ll look forward to his next outing.   Given the excellent talent of his protege James Wan and several other directors, not only is Leonetti in good company but the horror genre in general has better times ahead.  Just try not to spill too much popcorn.

Synopsis: A couple begin to experience terrifying supernatural occurrences involving a vintage doll shortly after their home is invaded by satanic cultists.

Knives Out | A Very Sharp Whodunit