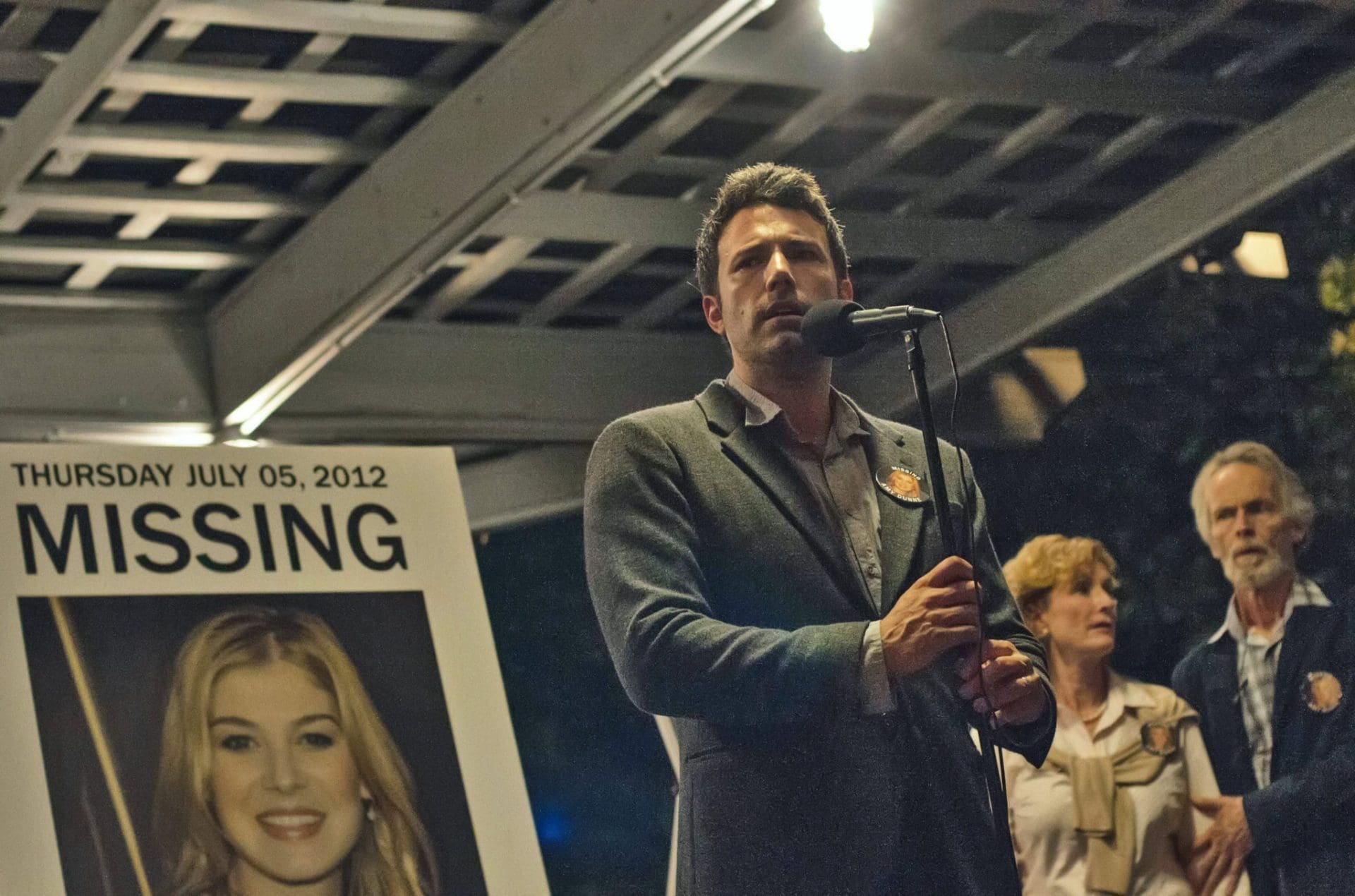 When a popular book is adapted into a big budget film with high-profile names attached, often the audience who so loved the written narration cringes at the mere thought of a clueless screenplay writer ruining their favorite tome. Then again, sometimes those screenplay writers are the authors themselves. This is the case of Gillian Flynn’s Gone Girl that hits the silver screen on October 3, 2014.

Gone Girl, directed by David Fincher (Fight Club, The Social Network), follows the struggles of Nick Dunne whose wife, Amy, has recently gone missing on the morning of their fifth wedding anniversary. Through several missteps, Nick immediately becomes the prime suspect as he tries to untangle the truth. All the while, Fincher and Flynn toy with the audience’s perception of “gone” and the implications inferred with a crime scene, a marriage that’s begun to deteriorate, and clues Amy sprinkled around town before disappearing. As the conflict between Nicky and Amy unfolds, the audience catches glimpses into their former happiness, or, perhaps, the faux happiness of two people who enjoy pretending to be people they’re not. What’s clever about this film (and the book before) is that Flynn keeps you guessing as to who you should root for. Do you root for Nick (played by Ben Affleck), the down and out bar owner who drinks bourbon in the morning with his twin sister, Margo (Connie Coon), and is supposedly struggling with the disappearance of his wife. Or do you root for Amy (played perfectly by Rosamund Pike) whose diary entries through her marriage shows a early joyous fairytale marriage that has clearly disintegrated? Either way, this psychological thriller is worth the  2 ½ hours Fincher takes to develop the film.

Those who’d heard early rumblings of a reworked third act need not fear that the story has been altered. Flynn kept the plot consistent with those major points enjoyed in the book, albeit Dunne’s father has been downplayed and Flynn nixed minor elements of the Plan altogether for sake of pacing (remember the poison puke, dear book readers. It’s gone.) Beyond that the screenplay is true to the book, and this reviewer left pleased with the finality found on-screen.

I’d be remiss if I didn’t mention Neil Patrick Harris who plays Amy’s ex-boyfriend slash stalker, Desi Collings, who she’s obviously strung along for most of his adult life. His lavish mansions and impeccable tailoring don’t mask the fact that NPH is the true auteur from the moment we lay eyes on him helping to search for the missing Amy around their Missourian suburb. His subtle performance culminates in the starkest scene of the entire film, which is perfectly scored by the Oscar winning team of Trent Reznor (yes, that Trent Reznor) and Atticus Ross. This is their third soundtrack together having worked on both Fincher’s The Social Network and Girl With the Dragon Tattoo. Reznor and Ross developed a score that plays at the platitudes of the wholesome suburban wife with an underlying monster lurking behind the mask of monotony.

The other characters who round out the cast include Tyler Perry who plays Tanner Bolt the slick big city lawyer who helps Nick develop his case. With his lavish suits, Lincoln town car, and $100,000 retainer, Tanner swoops in for the cash but ends up as an ally by his final scene. Moreover, Kim Dickens’ Detective Rhonda Boney translates well from the book to the film. As the lead detective, she shifts between being Nick’ advocate and doing her job, while her counterpart Patrick Fugit’s (who I adored as a youngster in Almost Famous) Officer Jim Gilpin plays a boring podunk police man who acted more like a police pet than an officer of the law. (Hey Gillian, could you have given him more than two lines?).

What’s great about Gone Girl is the interplay between truth and perception of two characters who have been manipulative and passionate about the lives they lead. Fincher demands we join this roller coaster ride of exciting twists and turns and then leaves the audience questioning our own realities and seeking to understand the motivations of these characters psychologically tormented actions. Go see this top-notch Hollywood thriller, and then read the original novel.

Synopsis: On the morning of their fifth wedding anniversary, Amy Dunne goes missing from her Missourian mcmansion. Her husband is the prime suspect, but nothing is ever as it seems.

Rated: R for sexuality and violence