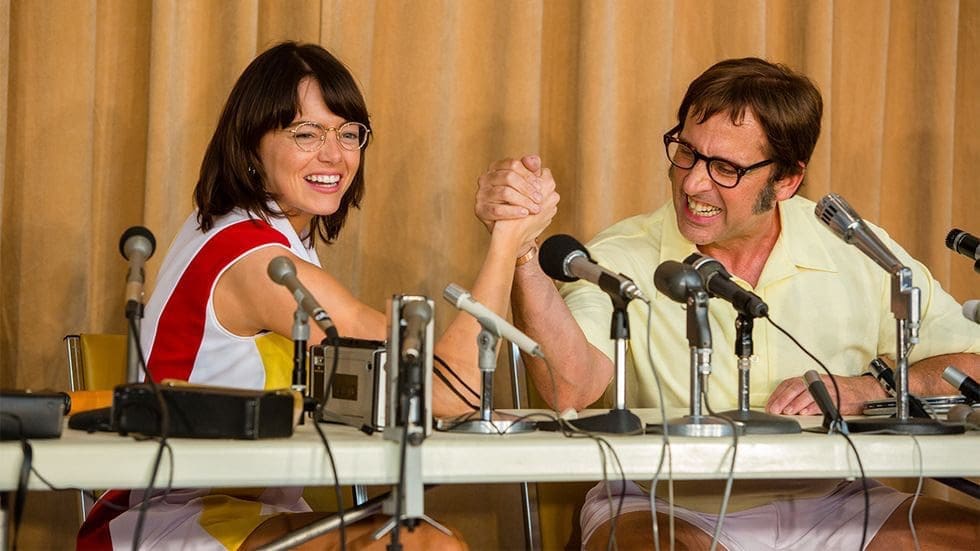 Sometimes a movie tries to be more than it should be. It doesn’t always result in a bad film, but usually, there’s at least a little room for improvement. That’s the case with Battle of the Sexes, the true story of the infamous 1973 tennis match between world champion, Billie Jean King (Emma Stone) and former champion, Bobby Riggs (Steve Carell). The film has quite a few charming and powerful moments, but it suffers from being a bit overstuffed and trying to do too many things during its two hours run time.

If you watched any of the marketing for Battle of the Sexes, you’re probably assuming the film is about the famed tennis match between the two world champions. While that’s certainly a large portion of the film, the first and second acts deal more with King rallying for women’s rights and struggling with her sexuality. When you add those two strong points to the big match at the end of the film, you run into some issues with pacing and focus. Luckily, Battle of the Sexes still ended up being an entertaining film, but it hit a few bumps to get there.

Almost every scene featuring Riggs feels like it’s straight out of a comedy. If you’ve only seen the trailers for the film, you probably assume it’s a comedy because the trailers focused almost exclusively on Riggs and his match against King. However, most of the film before the third act deals with King and her battle for women’s rights against Jack Kramer (Bill Pullman), founder of the Association of Tennis Professionals.

The battle against Kramer propels King’s motives throughout the entire film. However, her affair with Marilyn Barnett (Andrea Riseborough) takes centre stage about halfway through the film. During this period, her fight for women’s rights and the match against Riggs both fall to the background and makes it feel like you’re watching a completely different movie. Again, this isn’t a bad thing, but when this transition happens the pacing of the film slows down considerably and it can feel like the movie is grinding to a halt.

Outside of King’s relationship, there’s a lot of fun and a few powerful moments to be had in Battle of the Sexes. King’s friends and colleagues, Gladys Heldman (Sarah Silverman) and Rosie Casals (Natalie Morales) not only offer some comic relief but are truly enjoyable to watch when they’re given some room to play around in a scene. Silverman has a presence throughout most of the film, but Casals isn’t able to really shine until toward the end of the movie.

Battle of the Sexes is three different movies in one. It starts out as a film about the fight for women’s rights back in the 1970s, transitions into a film about lesbian rights and King’s affair, then ends with the famed match against Riggs, which feels more like a sports movie than anything else. There’s a lot to take in, and the pacing does suffer a bit, but overall this is a solid film with highly entertaining performances from most of the cast.

Battle of the Sexes: [yasr_overall_rating size=”large”]

About Battle of the Sexes

Synopsis: The true story of the 1973 tennis match between World number one Billie Jean King and ex-champ and serial hustler Bobby Riggs.