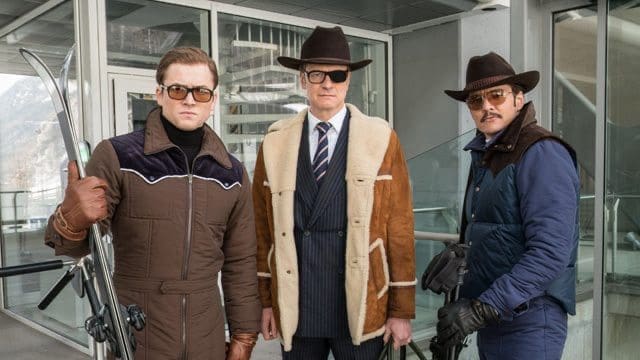 The spy genre has been hitting on all cylinders as of late. It’s a type of film where the viewer usually idolizes the protagonist and wishes that he or she could also live a lifestyle of harrowing action, torrid suspense, and unbelievable adventure. Some of the more recent iterations of the genre tend to also blend in some sort of a team dynamic – whether it is a dynamic duo or a group of people who specialize in different skill sets. A couple of my favourites within the spy genre are Mission Impossible, Casino Royale, The Bourne Ultimatum, and True Lies.  These particular films tend to have some of the best action set piece moments while also leaving me on the edge-of-my-seat with a tremendous amount of tension and suspense. Matthew Vaughn’s Kingsman: The Golden Circle is the newest iteration of the well-worn spy genre and is the sequel his 2014 box office hit Kingsman: The Secret Service.

This film takes place shortly after the events of the first film with Eggsy (Taron Egerton) and Roxy (Sophie Cookson) now being some of the main contributors to the Kingsman organization. One day one of the rejected applicants from the first film shows up to try and take down Eggsy. He’s ultimately thwarted however in the process he gains information on the location of other Kingsman members. Poppy (Julianne Moore) is a criminal drug lord obsessed with 1950’s nostalgia who uses that information to destroy the Kingsman headquarters and hold the world captive. Now Eggsy must team up with his American counterparts to try and stop Poppy at all costs.

While I thoroughly enjoyed the previous film for its crazy action scenes and over-the-top spy antics, Kingsman: The Golden Circle, unfortunately, falls short in many ways. For starters, the main plot is essentially a retread with drugs replacing the whole SIM card aspect. Also, Poppy’s entire evil scheme is incredibly absurd and badly thought out. If everything goes to plan, she is essentially sabotaging her entire drug operation instead of actually helping it. The other main issue I have with the film is just how messy the pacing and character development is. There are so many new characters and locations that are introduced that it completely overwhelms the story that the film is trying to tell. At times I was confused on where characters were and why they were doing what they were doing.

Negative criticisms aside, the film is still incredibly fun to watch. My favourite new aspect was the crazy whip that newcomer Pedro Pascal uses throughout the film. At times it’s just a normal whip, at other times it has the ability to literally slice a man in half. It’s a weapon that isn’t utilized very much in films nowadays and I loved that they found some new and interesting ways to make use of it. Another facet that I really liked was just how zany the film got at times. From robot dogs to a man with a cybernetic arm, the film delves into the campiness that comic books tend to present and utilizes many over-the-top characteristics. Lastly, Taron Egerton is still immensely likeable, charismatic, and plays the type of spy that you would love to be friends with. He is never full of himself but instead is very grounded in such an unrealistic and exaggerated world that is created.

Kingsman: The Golden Circle definitely can’t top the original film but it is a nice counterpart with some fun visual moments and engagingly fresh spy antics.

About Kingsman: The Golden Circle

Synopsis: When their headquarters are destroyed and the world is held hostage, the Kingsman’s journey leads them to the discovery of an allied spy organization in the US. These two elite secret organizations must band together to defeat a common enemy.