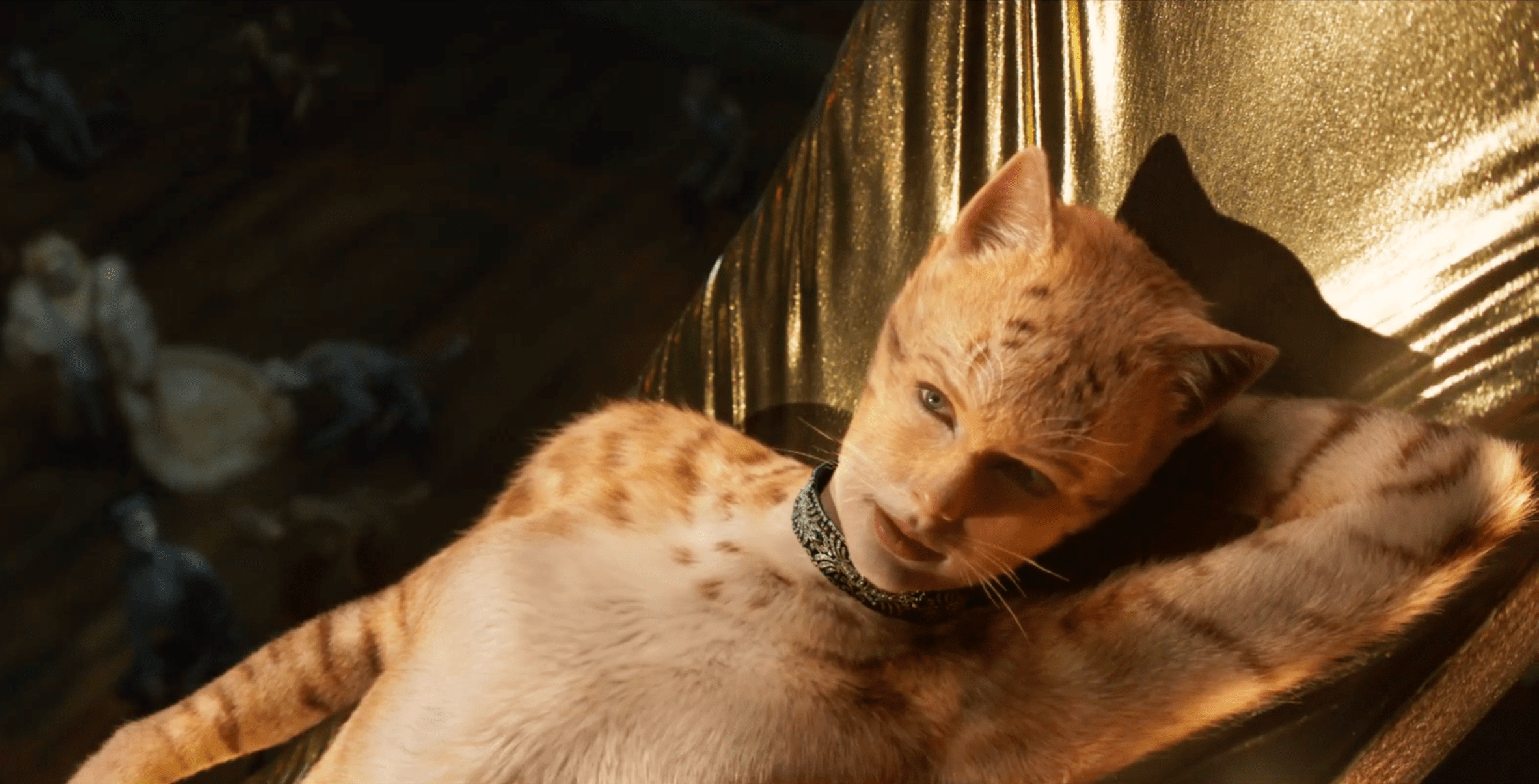 I must begin this review with a confession.  I have never seen the Broadway musical Cats.  Of course, going in I was still familiar with its existence.  The musical Cats, based upon a series of whimsical poems by T.S. Elliot and composed by the legendary Andrew Lloyd Webber, has certainly left its paw print on pop culture.  Stage actors singing and dancing while dressed head to toe and behaving like furry felines is not something that goes unnoticed, and neither will this movie.  It was a bold choice then, and the same boldness was clearly embraced in the making of this film.

The premise of the story is peculiar yet simple.  An abandoned cat named Victoria (Francesca Hayward) plays the role of the audience surrogate as she joins a tribe of cats called the Jellicles.  The Jellicles are competing for the favor of the tribe matriarch named Old Deuteronomy (Judy Dench) who is preparing to make The Jellicle Choice.  This is where she decides which cat will ascend to the Heaviside Layer and be reborn as a new cat.  How do they go about competing for her favor?  Well, by performing show tunes of course!  Meanwhile, the sly criminal cat Macavity (Idris Elba) tries to sabotage the competition for himself.

While there is surely some symbolic value to the narrative, that is not the draw of this movie.  You aren’t watching for the story, you are watching for the music, the performances, and the astounding array of visuals.  On that last point it would be a crime to go any further without addressing the elephant in the room.  As we’ve all seen since the drop of the highly talked about trailer, these are not your average CG cats.

Embracing and then building upon the imagery of the musical, what we are presented with are cat/human amalgamations.  Many have already expressed displeasure at this, likening it to the uncanny valley.  However, I ask that viewers take a step back and appreciate this stylistic choice for the boldness that it shows.  It is bizarre and a bit discomforting, but that also means its unique and daring.  It’s giving us something outside-the-box and we don’t see that much at the movies anymore.

Director Tom Hooper also gave us Les Misérables, so he is no stranger to adapting musicals to film.  Fortunately, instead of forcing us to endure the vocal misgivings of Russell Crowe again, this time he has blessed us with a truly well-fitting musical cast.  There are big names like Idris Elba, Ian McKellen, and Judy Dench. Also several musically talented members of the Royal Ballet are cast in prominent roles for their dancing and singing expertise.  This includes the film debut of Francesca Hayward who beautifully plays the centric character Victoria.  Musical giants Jennifer Hudson and Taylor Swift also give un-fur-gettable purr-formances! Swift even wrote an original song alongside Andrew Lloyd Webber that appears in the film.

Phenomenal music and talent aside, if a musical is adapted into a film the medium should be used to give us something special.  Cats does this, and I must say while the CG is still in a sense off-putting, it embraces it in such a stylistic and surreal way that it helps drag you into the bizarreness of the film.  It takes you on a journey with Victoria into this strange world of cats, meeting each character as they take turns performing musical numbers that embody their unique personalities in grandiose and highly stylized fashion.   The cinematography is as brilliant as the choreography.  Each number could be its own uniquely artistic music video, yet they tie together just enough not to feel disjointed and remain one fluid Alice in Wonderland like experience.

There are missteps along the way.  Humor ties into the very fabric of this movie, as it’s often impossible not to laugh at the strangeness of it all. However, there are moments that feel forced.  It’s not that the forced humor isn’t funny, but it feels out of place and pulls you out of the magic.  A good example is James Corden’s sassy “hiss” that you see in the trailer.  The film also falters the few times it tries to have an actual plot.  The narrative exists merely as a vehicle to deliver the performances and the minimalist nature of it actually serves the film well.  It doesn’t make sense, and it doesn’t need to, but when too much attention is drawn to it that starts to be apparent.

Cats will not be for everyone.  I understand for many if the aesthetic isn’t a turn-off, the very premise will be.  To enjoy this film, you must be willing to forego typical storytelling and enjoy it simply as an artistic experience.  For those this appeals to, the experience truly is something quite unique and special.  Cats didn’t become a success on Broadway by trying to appeal directly to the general public.  It succeeded because it pushed artistic boundaries and presented something bizarrely different without fear of ridicule.  It took a big gamble, and this movie is doing the same.

Now, whether the movie truly lives up to the musical is something I unfortunately cannot attest to. What I can say is that Cats was an experience like none other and I enjoyed just about every weird and far-out minute of it.  It’s certainly not purr-fect, but if you’re a curious cat like me I highly suggest seeing this one in theaters.

Synopsis: A tribe of cats compete for the affection of their matriarch by performing highly stylized musical numbers.