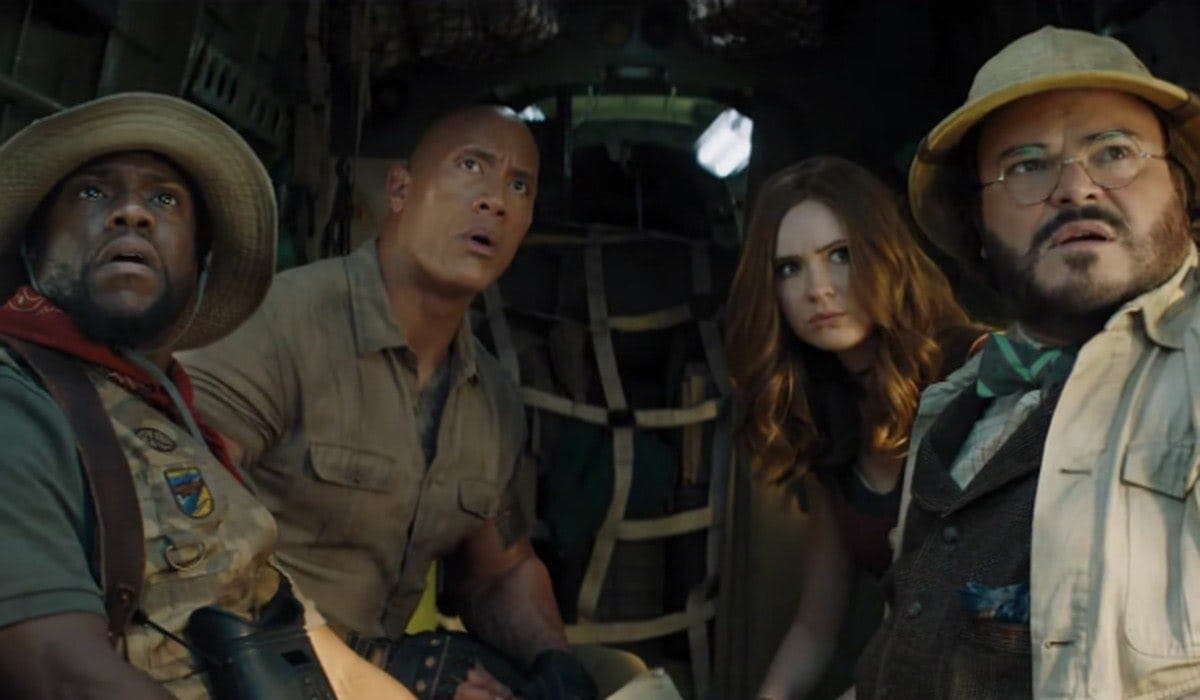 The Christmas movie season is upon us and as you make your way to your local cineplex you will, predictably, come across a musical, a Star Wars movie, a festive horror film, plenty of awards contenders, and a sequel to something popular. This December’s sequel is the eagerly anticipated third Jumanji movie. The surprise success of Jumanji: Welcome to the Jungle made another sequel inevitable. It almost cleared a billion dollars worldwide and that can be attributed to a few factors. Great actors with brilliant chemistry, a good story that improves upon the original premise of the 1995 movie, and word of mouth. It stayed with audiences week after week and built up a reputation as a fun experience to enjoy with your family and friends. A sequel can go one of two ways. Approach it from a different angle and give us something new with the same characters; or keep doing the same thing with a couple changes here and there but make it feel even bigger. Neither is a bad way to go, but 9 times out of 10 the latter is the most likely scenario and that is pretty much how this movie turned out.

In Jumanji: The Next Level, directed by Jake Kasdan, Spencer (Alex Wolff), Martha (Morgan Turner), Fridge (Ser’Darius Blain), and Bethany (Madison Iseman) have graduated high school and moved on to the next phase in their lives. After escaping the clutches of the Jumanji video game, everyone seems to be happier and a little wiser, but Alex is feeling insecure about his current lot in life. He’s become reserved and isn’t confident he’s made the right decisions. When his friends come back to look for him, they find that he has gone back into Jumanji. They decide to risk their lives to rescue Alex, but it appears Alex’s grandfather Eddie (Danny DeVito) and Eddie’s former business partner Milo (Danny Glover) have accidentally been taken along for the ride.

The familiar avatars are still present in the game. You have buff, athletic archaeologist Dr. Smolder Bravestone (Dwayne Johnson), zoologist and supplies carrier Mouse Finbar (Kevin Hart), deadly dance fighter Ruby Roundhouse (Karen Gillan), and renowned scientist in charge of reading the map Shelly Oberon (Jack Black). While the avatars are the same, the people playing them may have changed. That’s because the game didn’t allow anyone to choose their player. Together they set off on a new adventure fraught with peril and a new villain named Jurgen the Brutal (Rory McCann). His backstory is of no consequence because this is a game and where the only objective is to retrieve an object and save all of Jumanji.

A new player that is introduced is Ming Fleetfoot, played by Awkwafina. Ming is a cat burglar and expert thief. Her addition to the game provides some fun moments and some unexpected humor.

The movie does take its time to hit its stride. When the story first unfolds, I’m glad to see the kids and video game characters again, but I didn’t get a sense of purpose for being back in this world. There are some great action sequences and hilarious banter. The chemistry is still there and everybody does their part, but I found something lacking. Perhaps it’s because I didn’t feel any mortal danger this time around. Which isn’t to say there aren’t deadly scenes. It’s just that those scenes are all played for laughs now. The movie overall aims towards comedy and no longer has the interesting element of the internal struggle of each character. Also the emotional beats of the 2017 Jumanji film are largely absent or cut short across this film.

Danny DeVito and Danny Glover are the best additions to the cast because their interactions were like a vaudeville act of grumpy old men. Their characters do exhibit a depth of emotion from time to time and that is maybe the strongest argument I can make for this film having heart. Aside from Spencer’s quest for self-confidence, the other kids are largely just along for the ride. In a movie like this, that’s not necessarily a negative. But when the previous story was stronger it makes the less-developed parts of this film stand out.

Clearly the adult actors have their work cut out for them as they try to portray multiple characters in the film. Jack Black goes from playing a bubbly high school girl to a African-American college football player. Dwayne Johnson and Kevin Hart get to test their talents being old men in younger bodies. There are some other surprises as well. Its a great concept that yields clever results and funny one-liners.

Jumanji: The Next Level is a decent sequel that relies heavily on its action pieces, comedic moments, and not straying far from the original premise. I wasn’t captivated by the story as much as the original and kind of felt they didn’t evolve the characters as well as they should have. Still this movie has a lot of excitement and just enough tenderness to make it worth a trip to the theater. The entire cast is a pleasure to watch and the last half of the film makes the slow pace of the first half forgivable. I recommended taking your friends to see this and enjoying a good time at the movies.

About Jumanji: The Next Level

Synopsis:  In Jumanji: The Next Level, the gang is back but the game has changed. As they return to rescue one of their own, the players will have to brave parts unknown from arid deserts to snowy mountains, to escape the world’s most dangerous game.