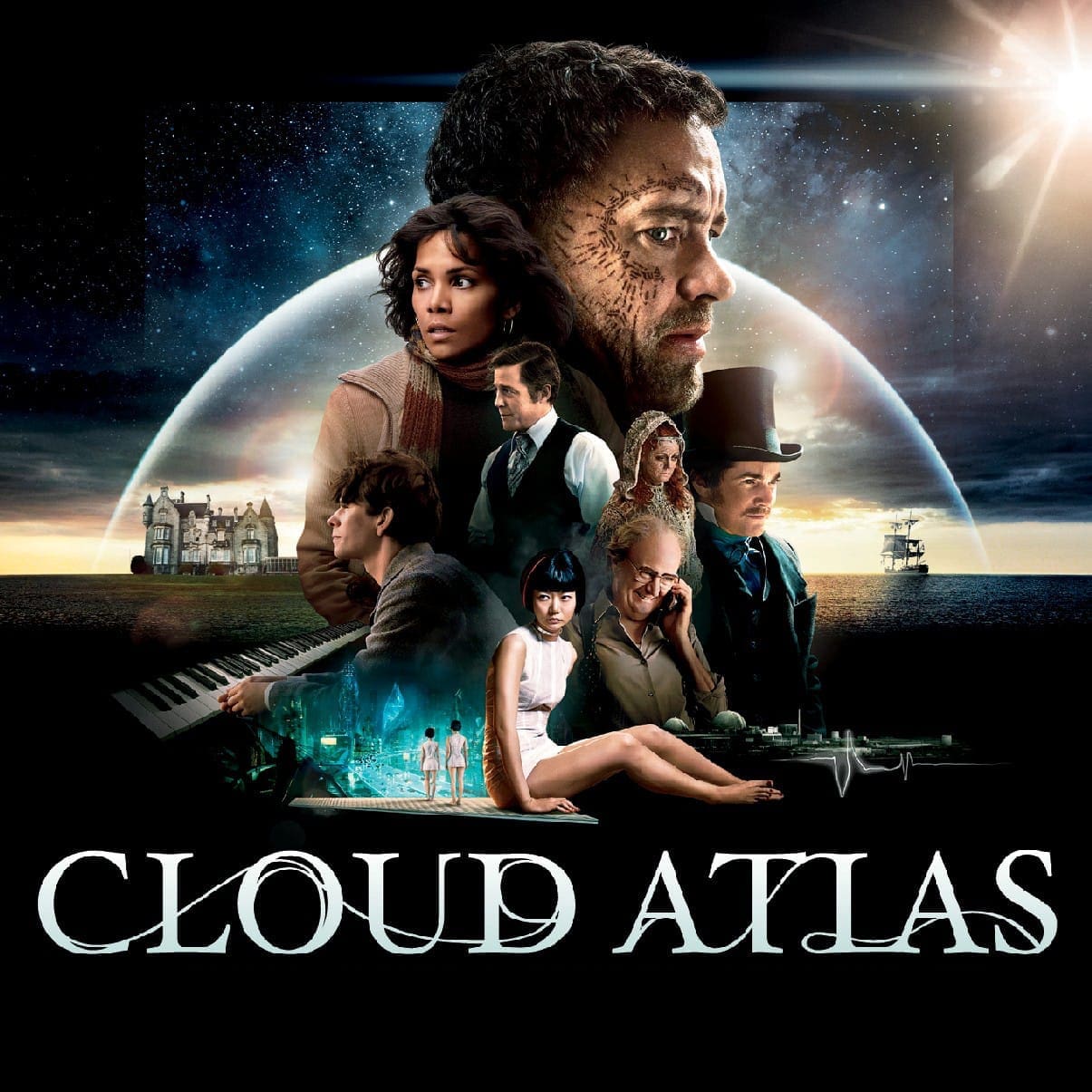 This is going to be a unique review as Cloud Atlas is one of those movies where you cannot simply tell someone if it is good or not. It needs to be experienced. I had the opportunity to stick around after the showing for a discussion with a film professor from ASU whose name I didn’t catch. I didn’t stay so much for discussing what I had felt, but to hear what other people had to say. And there were some interesting theories being thrown around and none of them were exactly the same. Had I not stayed I probably would have slapped this movie with a 4. I knew going into it that there were going to be some ideas presented that were beyond my understanding, which is fine, I don’t think there are enough movies out there that actually encourage you to think, but I can usually define the themes pretty easily and to my satisfaction. Cloud Atlas was a different story.

Sure, movies like Inception forced you to think too, but they wanted you to think about the movie itself, not the ideas presented. Cloud Atlas wants you to go beyond just what you saw on the screen. It almost holds a mirror up to you and asks those questions. What questions? I think that’s for you to decide. Like I said, everyone who spoke up during the discussion had something different to say. For me, I don’t think the questions I had about it will ever be answered, nor do I think they were meant to be per se. This movie is meant to be watched over and over again so you can delve deeper into it and find something new each time. This isn’t to say that Cloud Atlas is a perfect movie, because it’s not, but it was bold enough to stand out in this world of Transformers and The Avengers (writers note: I enjoyed both of those movies).

One of the technical questions I had going into it was what is a movie going to look like that directed by three people? In the back of my head, throughout the entire movie, I was trying to figure out if I could tell the difference. It wasn’t until the end credits do you find out that the Wachowski siblings directed certain time periods and Tom Tykwer directed the others. I’m not going to say which ones were which because A) I don’t remember, and B) It doesn’t matter. The movie flows seamlessly, cutting back and forth between the six time periods as if it was directed by one person. Afterwards I was kind of skeptical that these three could make it flow so undistractingly, but I realized that they weren’t trying to copy each other’s filming style, they just had a singular vision for the project and understood each other and what needed to be told.

Each of the main actors plays at least six different roles in the movie and that goes without saying that a lot of make-up was used for their transformations. Most of the time I could tell who was who. Most of the time. I challenge you to find each person (Tom Hanks, Halle Berry, Hugh Grant, Jim Broadbent, Keith David, Jim Sturgess, Doona Bae, and Ben Wishaw) in the six time periods. During the end credits they show each person as their different characters and it was really fun listening to people reactions when they realized that was such and such?

Every actor really defined each character as its own person, except Tom Hanks. Don’t get me wrong, I like Tom Hanks, and he was good in this movie, just not with every character. His performances weren’t phoned in by any means; he just hasn’t perfected the art of character acting yet. Someone told me before going that Hugh Grant was going to be awful, when in reality he was my second favorite character, Jim Broadbent really steals the show in this one.

Cloud Atlas is just a beautiful movie. If nothing more, see it for the visuals. Every time period looks(duh) and feels different. The production design, from the bowels of an 18th century ship to the futuristic and post-apocalyptic wastelands of Korea, and the costume work was stellar and is sure to be nominated for an Oscar, if not win one.

So, like I said at the beginning this is a unique review. The impact of this movie will be more of a slow burn than a flash in the pan. This movie is going to be talked about and dissected in film classes for years to come. As I can’t give it a number rating based on the fact that I don’t fully understand it yet, or expect to, I’m just going to recommend that you see it. See it with an open mind and I promise you won’t be disappointed.

The film professor asked us to describe the movie in ten words or less. I did it in about eight hundred and that’s probably the best I can do.